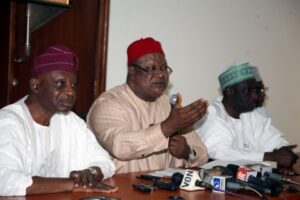 The federal government of Nigeria today announced the modalities for the proposed but controversial National Dialogue, which it said would now be known as “The National Conference” and feature 492 delegates. Speaking to journalists in Abuja, the Secretary to the Government of the Federation, Anyim Pius Anyim, said that all Socio-Political and Nationality Groups in the country have been given 15 slots from each Geo-Political zone just as five political parties will get 2 slots each in the proposed National Conference. The slots are limited to the political parties that have representation in the National Assembly, which are the Peoples Democratic Party, the All Progressives Congress, the All Progressives Grand Alliance, the Accord Party and the Labour Party. Giving other details of the National Conference, which will hold in the Federal Capital Territory, Abuja, Anyim said: “It shall last for 3 months and shall discuss any subject matter, except the indivisibility and indissolubility of Nigeria as a nation, therefore the unity of Nigeria is non-negotiable. The decision at the National Conference shall be by consensus; but where it is not achievable; it shall be by 75% majority. It shall advise the Government on the legal framework, legal procedure and options for integrating the decision and outcomes of the National Conference into the constitution and laws of the country and the Conference shall have a Chairperson and a Deputy Chairperson of unimpeachable integrity.” He further stated that January 30- February 20 will be for nomination of delegates, and that the inauguration of the conference will follow soon after the conclusion of the delegates list. Giving a breakdown of the composition of delegates, he said they would be as follows: Federation Government of Nigeria (20) and 6 must be women Nigeria Labour Congress (12) Trade Union Congress (12) Civil Society Organisations (24) Military (6)1 per Geo-Political Zone Police (6)1 per Geo-Political Zone State Security and NIA (6) 1 per Geo-Political  zone National Council for Women Society (NCWS) – (12) 2 per Geo-political zonel Market Women Associations (6)—1 per Geo-Political zone FIDA, NAWOJ, WINBIZ—(6) —1 per organization Elder Statesmen –(37) — 1 per State  and FCT NECA —(2) MAN—(2) NACCIMA (2) NESG (2) NUJ –(2) Nigerian Guild of Editors (2) Newspapers Proprietors Association  (2) People Living with Disabilities (6) 1 per Geo-Political zone Christian Leaders (6) Muslim Leaders (6) Traditional Rulers  (13) 2 per zone + 1 from FCT ) Retired Civil Servants  (6)  1 per zone National Youth Council of Nigeria (6) NANS  (6) Other (Outsatnding Youths and Role Models) (6) Nigerians in Diaspora (Europe,America Africa, Asia and Middle East)  (6) 2 per location Broadcasting Organisation of Nigeria (2) Socio –Political/Cultural and Ethnic Nationality Groups  (90)  15 per Geo-Political zone,nomination should reflect Ethnic and Religious Diversities. Professional Bodies : (13) NBA,NSE,CIB,NMA,NIM,NIA,ICAN, ANAN,NIPR,AAPN,NIESV, Nigerian Environmental Society   (1 per organization) National Academy: (5) Academy of Science Academy of Engineering Academy of Education Academy of Letters Academy of Social Sciences     (1 per Academy) Judiciary (6) person not currently serving on the Bench Former Political Office Holders: Former Governors (6) Senators Forum (6) House of Reps. Forum (6) Association of Former Speakers(6) State Government and FCT  (109)  3per State and 1 for FCT based on Senatorial District at least one of whom shall be a woman . Former LGA Chairmen (6) 1 per Geo-Political zone Chairmen ,Deputy Chair and Secretary  (3)  Geo-Political spread to be observed  .   *Nomination of these delegates shall be done by the stakeholders of such group. *Source Sahara Reporters]]>