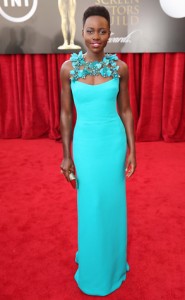 How does Lupita Nyong’o feel about being one of the most fashionable stars of the 2014 awards season? The 12 Years a Slave star, who won during tonight’s SAG Awards, says she does stress when it comes to being a budding fashion icon. She doesn’t even feel the pressure when it comes to picking out gowns for awards shows! “No, I actually don’t feel the pressure because for me my first love is acting,” Nyong’o told us backstage during tonight’s SAG Awards at the Shrine Auditorium. “And that’s where my focus is. I’ve loved the opportunity to learn about the fashion world and appreciate it as an art form, and I look forward to my continued education, but I never want it to take over my acting.” Whether she’s trying to be a style icon or not, Nyong’o sure wows on the red carpet. During tonight’s SAGs, she stunned in a green Gucci number. And last week, Nyong’o was named Best Dressed at the 2014 Golden Globes by Fashion Police for her amazing caped red Ralph Lauren dress. On today’s red carpet, Nyong’o reacted to the position reaction she got for the Globes gown, saying, “I heard some of it. I was pleasantly surprised! It felt good.” Nyong’o isn’t just a hit when it comes to fashion. She also gives the best acceptance speeches! After winning her Supporting Actress award tonight, she said on stage, “I also wanna thank my family, who have kept it real. My dad, he was the first person I called when I got this role, and I said to him, ‘Daddy, do you know Brad Pitt? I’m going to be in a movie with him.’ And he said, ‘I don’t know him personally, but I’m glad you got a job.’ So am I!” Gotta love this girl. *Source e-online]]>