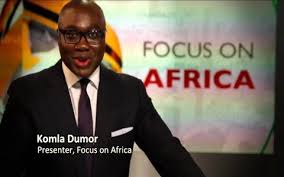 Yesterday, Komla Dumor died. Six years ago, we sat on the green grass outside Bogobiri and became friends. He had come to Lagos to interview me. A tall, broad Ghanaian with an open spirit; sometimes we meet people and we know instantly that we will be friends, that we will get them as they get us.

“Is there any other continent in the world where the word ‘discussant’ is actually used?” he asked me. So he, too, was amused by that word! I laughed and laughed. We made fun of Nigeria and Ghana. We spoke about our continent, the things we loved and longed for, the broken things we wished to make whole again. He was travelling through West Africa and his first email, after he left Lagos, included a photograph. He wrote: “The attached photo is meant to make you laugh. Abidjan airport. 35 degree heat. And I met this brother who had just arrived from France. In a fur coat. Ah well. How else would his people know he was from abroad? Laugh and be happy.” Then he sent a link to photos of his trip and wrote: “if you’re ever bored enough to check it out and laugh at the expanding midriff of your Ghanaian brother.”

We lost touch for some years. I saw him again at TEDxEuston in London. ‘My discussant brother!” I said. And he, surprised and pleased, said, “you remember!” Of course I remembered. Did he not know, I wondered, that he was a person not easy to forget?

I watched FOCUS ON AFRICA with pride. Here, finally, was an African-focused show done right. Even if I had not known Komla, I would have been proud of his work. Because he pronounced his name the way it is supposed to be pronounced. Because he was an honest journalist, free of masks.

When his mother died, Komla wrote to me: “I tell you this because one day I will write about it. The ambulance ride. The Accra heat that day. The indifference of the nurses (why have you brought her here.. why wasn’t I informed..).The doctor whose first words when we arrived at the hospital was, “so have you said the final rites?”(as only a doctor trained in Africa could do).The way hope faded with each breath she took. The call at 4 am on Saturday the 13th of December. The voice at the end telling me she is gone. And perhaps the strange feeling I have now wondering why I haven’t been able to cry about this yet. Even though I know the dam is filling up in my soul…anyway maybe you have inspired me to write something.”

Komla’s words moved me. Love and frustration and grief for his mother, and also for his country, each feeding on and drawing from the other. Those emotions fuelled his reporting on Africa: his son-of-the-soil curiosity and authority, his quintessentially West African warmth, the space he made in his heart for mischief and joy. He was telling our story and telling us stories and representing us. Komla Dumor knew we had many failures, he knew too that hope could be wrested from African stories. He had a stake and it made a difference.

I last saw him in October at the African Leadership Conference in Mauritius. He was leaving. I had just arrived, and had missed a birthday party for him the previous day. “I thought superstars just don’t go to parties,” he teased, while I tried to make him postpone his leaving. I wish I had made that party. I wish we had talked more. I wish Komla were still here.

Komla swept into the world, stylish and sure, with his big chuckle, the light in his eyes, a genuine goodwill for people, a familiarity with laughter. He had no false modesty, yet an endearing insecurity lurked beneath his flair-filled confidence. He had, too, something close to innocence, a wonderful capacity for wonder. And now he is gone. We have lost a star. Go well, my discussant brother.

A Continent on Her Musical Map