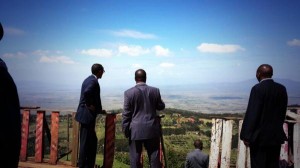 President admiring the view of the Great Rift Valley in Naivasha on Monday –[/caption] Kagame said he never had any presidential ambitions when he started participating in the liberation struggles in Uganda in the 1980s and that his rise to the highest political office in Rwanda was “something that has evolved over a long period of time.” “I had other plans that didn’t materialise,” Kagame told the Nation Media Group Governor’s Summit in Naivasha, Kenya on Monday. “I want to go, get involved in education and leave politics,” he asserted. The statement is the latest sign of Kagame’s resolve to quit politics three years from now. A huge debate has been raging in the Great Lakes region on whether President Kagame would quit or see the country’s Constitution amended to allow him another term in office. Some Presidents in the region who had earlier promised not seek the extension of their presidency later changed their mind. They include Mwai Kibaki, Museveni, Nujoma, Melez Zenawi and Idris Debby. Omar Bongo (Gabon), Gnanssingbe Eyadema (Togo), Paul Biya (Cameroon) and Museveni ensured the term limits provisions were scrapped from the Constitution to continue leading their respective countries. However, observers say Kagame is likely to follow in the footsteps of Daniel arap Moi of Kenya, Jerry Rawlings of Ghana and Joachim Chissano in Mozambique who respected the term limits and retired after serving over 15 years. Kagame told the Summit in Kenya today that “I try to make sense of why I am at this place. It was not the case of being here by writing an application.” Kagame further said his participation in the NRA and eventual victory of the rebel group in 1986 led to another struggle in Rwanda. “I fought for five years in Uganda and four in Rwanda. Never in the trenches did I think of being the President of Rwanda,” said Kagame. “I fought thinking about life and survival. Things just evolved to what they are. One thing led to another.” He noted also that during the RPF war and the Arusha peace talks of the 1990s, many “had almost taken it for granted” that he would be President. Kagame had travelled for a military course in United States when the commander of the RPF war Maj Gen Fred Rwigyema was shot on the frontline. He was later called to reorganise the scattered rebels for a fresh guerrilla struggle. Victory was realised in 1994 with RPF soldiers putting an end to the genocide. Motivation    Asked by participants at the Summit on what drives him, Kagame said the environment plays a pivotal role in shaping his decisions. “You are defined from two perspectives: One part you can’t do anything about and other you can. The two combine to shape you. And that’s for everyone, not just me. Environment has added a lot of what drives me. I have lived the life of a pressure cooker.” Kagame urged leaders to maintain a cordial relationship with the people they serve and to use home-grown solutions to attain the country’s long and short term goals. He also spoke on reconciliation efforts and democracy in Rwanda, saying lessons were drawn from the country’s history, culture and tradition to shape the current society. Kagame described as “bedfellows,” democracy and development but quickly added that while they might sleep together “one may take longer to wake up, but must be together.” He added that “one of the reasons that drive Rwandans to progress is the fear to go back where we have come.” The President said Rwanda stands with Kenya as she embarks on the work of implementing governance that will deliver to her citizens. *Source Chimp Reports