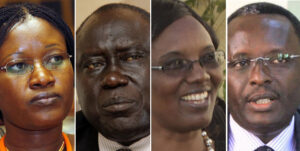 From left: Monique Mukaruliza, Tharcisse Karugarama, Rose Mukantabana and Martin Ngoga. Photos/FILE[/caption] They were once prominent public figures holding high government offices. In 2013 or before, a number of them were dropped amid changes in the government and they disappeared from the limelight. Rwanda Today set out to trace some of them.