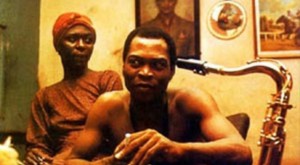 The man was Muhammad Ali, Che Guevara, and James Brown rolled into a tightly packed spliff that constantly burned with fiery inspiration. One million people, as in six zeros, attended his funeral. Most rappers don’t see six zeros until IRS rolls up with a bill. He was laid to rest in a glass casket with a joint in his hand (he was a notorious toker and was said to smoke cigar-sized joints ). A$AP would get shrinkage from just trying to live up to that.

Fela Anikulapo Kuti. His name as instantly electrifying as the 20-minute bizarre rides, not so much songs, he’d piece together with a band that put James Brown’s posse to shame. William Collins himself, Brown’s bassist and member of Parliament-Funkadelic, said “we were telling them they’re the funkiest cats we ever heard in our life. I mean, this is the James Brown band, but we were totally wiped out!” Some cat named Paul McCartney called Fela Kuti and his backing band Africa ‘70 the best band he’d ever seen live. Would the man with 60 gold discs say the same thing about The Roots?

Dude not only was asked by Sir Beatle himself to make music together, which Kuti denied based on principal (more on that later), but he made Paul weep at one of his concerts. Like “what 95% of the people on this planet do when they hear ‘Hey Jude’” weep. The kind of weeping Maejor Ali must have done when Justin Bieber agreed to “rap” on “Lolly.”

In many ways, Fela Kuti was the man every rapper has tried to become in their own ill-fated way. News that a new retrospective of his career, Best of the Black President 2, and grainy clips culled from YouTube, cements that fact.

While Public Enemy were politically charged, and Tupac tried to be politically charged (but mostly just liked to hear himself be politically charged), Kuti mocked the Nigerian military as explicitly and publicly as he could. Not via Twitter beef, a mixtape brawl, or ethereal diss tracks, he took his adversaries head-on. With the power to move people beyond the dancefloor, he caused riots when playing his track “Zombie.” Bypassing editorial censorship in Nigeria, he would buy up ad space in newspapers to publish scathing columns against the government. Would even Easy-E have the nads to take on Obama in a New York Times Op-ed?

And the cherry on the blunt: when a thousand soldiers descended on his commune, destroyed his instruments, burned down his studio, and threw his mother out of a second-story window, Kuti struck back as only he could―he delivered his mother’s casket to the army barracks, and wrote a song about it. He called it “Coffin for Head of State,” and made it twenty-two minutes long, just to be thorough. If Rick Ross thinks he’s a boss, he needs to look up the corporate ladder to see Fela perched atop.

Rappers―granted, not all of them―will boast about their sexual magnetism. Well, Fela married 27 women, at the same goddamn time, just to prove a point. He did it for the obvious reasons, but also to rebel against the conservatism of Christianity and Islam (the religions the rulers ascribed to), and to give the women, his backup dancers, who weren’t particularly respected in that era, a level of respectability.

Shyne went to jail for taking the fall for Diddy. Lil’ Wayne was nabbed by Border Patrol for narcotics. DMX got booked for driving without a license. Kuti went to court a whopping 356 times, and was incarcerated over 200, for his political grievances. After trying to run for president a second time, he was beaten by police and imprisoned, so as to be kept from campaigning.

Fela Kuti was not a man without inadequacies. He was ruthlessly critical of homosexuals, and despite being raised by feminist activist Funmilayo Ransome-Kuti, who was awarded a Lenin Peace Prize for her work, he was bafflingly an unapologetic sexist. To quote his own words from his authorized biography Fela: This Bitch of a Life, he thought, “men and women are on two different levels…Do I see man as being naturally superior to women? Naturally.”

But the pioneer of an incendiary genre lived a life that would make a rapper’s read like a Bazooka Joe comic strip. He turned down offers to collaborate from Paul McCartney — kicking him out of his club, and accusing him of “stealing black man’s music” — and also hefty deals from Motown, so he could give a voice to the voiceless in his native Africa. Certainly giving up mounds of dough in the process.

It’s never a good idea to blindly look up to celebrities, but instead of looking up to hommies who praise Lambos, or who literally need an elephant in the room to be semi-interesting, why not exalt the legacy of someone who rocked governments? All while making timeless music and winning over droves of followers. The hip-hop community has long wanted to be on Fela’s plane — The Roots put him on their album cover, Mos Def sampled him on his track “Fear Not Of Man,” Jay-Z and Will Smith bankrolled the Fela! musical on Broadway — but they’ve come up categorically short. KRS-One and Afrika Bambaataa flirted with Kuti’s greatness, but ultimately Kuti continues to be the man every rapper wants to be. Whether they know it or not.

*Source The Shadow League.Bogar Alonso contributes to The Shadow League when he isn’t taking in hip-hop at the speed of life (yes, that’s an Xzibit reference). His work can also be found on XXL, Egotripland, Potholes In My Blog, On The 7th Day of Hip Hop, and Sports Jerks. You can shadow him on Twitter @blacktiles. Click here to watch classic Fela Video

License Round Announcements and Updates at the 22nd Africa Oil Week 2015, Cape Town