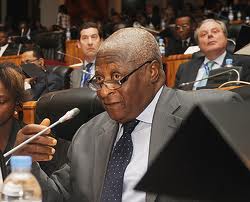 The Security Council, in its resolution 2127 (2013) of 5 December 2013, requested the Secretary-General to rapidly establish an international commission of inquiry for an initial period of one year, including experts in both international humanitarian law and human rights law, in order immediately to investigate reports of violations of international humanitarian law, international human rights law and abuses of human rights in the Central African Republic by all parties since 1 January 2013, to compile information, to help identify the perpetrators of such violations and abuses, point to their possible criminal responsibility and to help ensure that those responsible are held accountable. The Security Council called on all parties to cooperate fully with such a commission. The international Commission will comprise a secretariat and three high-level experts: Jorge Castañeda of Mexico, Fatimata M’Baye of Mauritania and Bernard Acho Muna of Cameroon. Mr. Muna will serve as the Chairperson of the Commission. Mr. Castañeda is an academic who served as Secretary of Foreign Affairs of Mexico. He has worked at several universities and international foundations in Mexico and in the United States. He has authored more than a dozen books and is a regular contributor to international newspapers and magazines. Ms. M’Baye is a human rights lawyer and chairperson of the women’s rights commission of the Mauritanian Association for Human Rights. She is Vice-President of the International Federation of Human Rights and has engaged extensively in human rights activism in her own country and at the global level. Mr. Muna is a lawyer and advocate of the Supreme Court of Cameroon, as well as a former magistrate. He served as Deputy Chief Prosecutor for the International Criminal Tribunal for Rwanda and was the President of the Central African Bar Association The three members of the Commission are expected to travel shortly to New York to meet with the Secretary-General, and will then travel to Geneva and Bangui to carry out their work. The Secretary-General has been requested to report to the Security Council on the findings of the Commission of Inquiry six months and one year after the adoption of the resolution on 5 December 2013. The Office of the High Commissioner for Human Rights will provide technical support for the establishment of the Commission. Source United Nations  ]]>