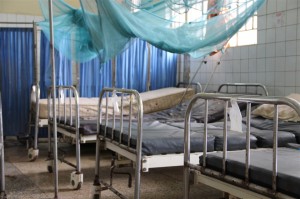 Infections have rapidly fallen after aid groups and government ramped up treatment and prevention. In August, President Ernest Bai Koroma declared the outbreak a national emergency
© Otto Bakano/IRIN[/caption] Cameroon is cracking down on more than a thousand illegal clinics and medical training institutions that have sprung up mainly in the capital, Yaoundé, and the coastal city of Douala. Some clinics simply operate without a licence; others are run illegally from private homes. Some owners clandestinely use licences obtained under a so-called Common Initiative Group (CIG) – a government scheme to ease the establishment of not-for-profit self-help groups, which are exempt from taxation and need no proof of initial capital – to run clinics. More than 500 medical training centres and over 600 private clinics are set to be closed in a four-month operation launched in December 2013. “We have launched operations to bring order to the medical sector, which has gone out of control, with anybody now able to own a medical institution. Most of them lack the training, appropriate staff, equipment and infrastructure to operate either a medical training institution or a clinic,” said Biwole Sida, national health inspector at the Ministry of Health. Recently a patient with severe burns was brought to a private clinic in Yaoundé but had to be taken to a nearby government hospital because the clinic had been closed due to the crackdown. The clinic’s attendant arrived later and told IRIN that the facility actually still operates, though now only by phone-scheduled appointments. “Most patients come to the hospital at the verge of death after they have wasted time in small private clinics, which are not even equipped – be it technically or professionally – to handle emergency cases,” said Francois Penda, a medical officer at the government hospital where the burn patient was treated. “An accident like this is so complicated and requires very delicate [procedures] and sophisticated medical equipment. Any unprepared attempt on it will complicate the patient’s chances [of recovery],” said Penda. Costs But some private clinic operators say that the cost of medical care in government facilities is prohibitive. That is why most people prefer the small private health centres, they say. “The government hospitals cannot cater for all patients. They are usually crowded, making it difficult to receive proper treatment,” said Maxwel Fonyu, a laboratory technician and owner of small clinic in Yaoundé. “There are millions of people living in urban slums who depend on affordable medical care from private clinics found in their neighbourhoods. In my clinic for example, instead of asking for 5,000 francs [US$10] for a malaria test, like it is done in big hospitals, I only charge them 500 francs to conduct a malaria test [and to] prescribe and sell them medicines that are affordable and vital for their treatment,” Fonyu said. The proliferation of private clinics has, in part, resulted from a plethora of illegal medical training institutions. “There is a need to [better] regulate the whole sector in Cameroon. Most training institutions operate illicitly,” said Etienne Tsou of the Health Science Faculty at the Catholic University in Cameroon. Many of these private training institutions fail to provide formal instruction, he said. “I don’t see how a medical professional can be trained on the job and not through formal education. Most retired nurses and doctors think they are qualified to open their own centres and train others when they don’t have all what it takes,” Tsou said. Brain drain “The sector may lack qualified professionals, but putting the lives of innocent citizens in the hands of charlatans will lead to a bigger public health problem,” Tsou cautioned. “There are, however, many Cameroonians with good graduate diplomas, but their services are exported to countries where they are better paid.” According to the Ministry of Health, about 5,000 Cameroonian medical doctors are currently working abroad, with around 500 to 600 in the US alone. Tetanye Ekoe, the vice president of the National Order of Medical Doctors in Cameroon, said that out of the 4,200 medical doctors in Cameroon, only about half are actually practicing. About a thousand are on secondment to the Ministry of Health, where they mainly do administrative work. The rest are university lecturers or work with NGOs and the private sector. Bolstering training To improve the quality of health professionals, the government in 2013 carried out an evaluation of the 10 official medical training institutions. Four state universities and two private universities were then permitted to continue training. The government also introduced a national entrance examination for higher institutions under the supervision of the National Medical Council. For the first time in Cameroon, over 8,300 candidates sat for a common national university entrance examination in October last year, competing for 500 spots for medical doctors, 150 places for pharmacists and 150 places for dental surgeons. More than 500 medical students and some 5,000 nurses graduate every year in Cameroon, which has nearly twice the minimum health worker-to-patient ratio recommended by the World Health Organization, at 1.9 health workers per 10,000 (the sub-Saharan average is 1.3:10,000), according to a recent World Bank report * Source IRIN]]>