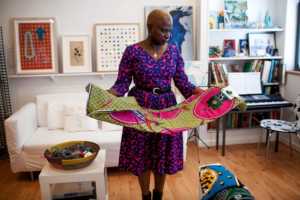 Musician and author Angelique Kidjo looks at fabric before heading to her stylist’s studio forafitting. Natalie Keyssar for The Wall Street Journal[/caption] Already a star in her home country of Benin, Angelique Kidjo was expected to sing at political events held by the Mathieu Kérékou regime or suffer the consequences. So, the musician fled the small West African country, leaving in 1983 when a customs agent she knew let her board a midnight plane from Cotonou to Paris. “Exile is not fun, let’s get that straight,” Ms. Kidjo recently said via phone from her longtime home in Park Slope. “You lose so much and you have to adapt so quickly. But I was much more afraid of not getting out. I would tell anyone to do the same. Living in fear is just another jail cell.” Now 53, Ms. Kidjo is on just about any list that compiles important current-day African figures. She returns to Africa regularly as one of its most recognizable musicians and as well as an UNICEF Goodwill Ambassador. She also founded the Batonga Foundation, which focuses on girls’ education and women empowerment in Africa, and works with other organizations on a number of different issues. Ms. Kidjo cycled through it all in her new autobiography “Spirit Rising: My Life, My Music,” sharing some favorite cooking recipes along the way. Celebrating the book’s release, she appears Jan. 9 at Barnes & Noble’s Union Square location and Jan. 27 at BAM’s Fisher Fishman Space. She also releases her 13th album on Jan. 28 (her music tour stops Feb. 15 at Town Hall). “Eve” is Ms. Kidjo’s musical ode to the pride, beauty and strength of African women, blending contemporary and traditional African voices and percussion, classic funk and modern dance grooves and even classical music. To cover all this ground, she’s backed by studio band of hired guns with guests who range from Dr. John to Vampire Weekend’s Rostam Batmanglij to the Orchestre Philharmonique du Luxembourg to several lesser-known woman singers and choirs from Benin and Kenya. The book appearances will be less of a proper reading and more of talkback with a few songs thrown in. “I hope they’ll have read the book by the time of the reading, then we can talk about it and see if they have questions,” said Ms. Kidjo. The book has stories of growing up in Benin as one of 10 kids, her 30-year music career, and her balancing roles as a wife and mother—she is married to musician Jean Hebrail (they co-write much of her music) and they have a daughter who studies acting at Yale. “If someone had told me it would take three years of my life to write a book, I would have thought more about whether to do it than I did,” she said lightly, more joking than not. “It was a long process, but it was cathartic to do.” Ms. Kidjo’s music circles are just as broad as her humanitarian ones, having collaborated with Carlos Santana, Dave Matthews, Branford Marsalis, Josh Groban and other A-list talent. So it’s no surprise that Bishop Desmond Tutu wrote book’s forward while Alicia Keys wrote an introduction. Jacket blurbs come from former President Bill Clinton, Peter Gabriel and Bono. Each contributor speaks of Ms. Kidjo’s indomitable spirit and energy. “Everything is linked for me,” she pointed out, speaking about music and life. “We are social beings and we need to connect with one another. Whether they like it or not, people have to live together.” *Source WSJ . Follow Angelique Kidjo on facebook]]>