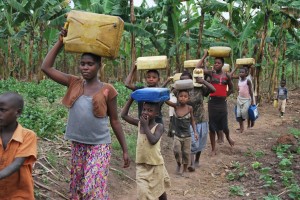 Children coming from fetching water (1)[/caption] Access to clean water is one of the major Millennium development goals slated to be attained before 2015, but with just a year away, residents of Bunusya in kakiika division Mbarara district western Uganda yesterday chose to give out there labor in the exchange of clean water after being pushed to the walls. The decision to volunteer their labor was unanimously reached yesterday in a community meeting that was held at Bunusya cell western Uganda. It follows an official letter that was received from the water and environment minister Prof. Ephraim Kamuntu. In the letter, the minister was responding to the demands they had submitted in 2010 demanding for the clean gravity water scheme. Speaking in the meeting, residents expressed relief over the given support saying it’s been a long awaited for development “since 1961, I have suffered water shortage and I had wanted electricity but I have gotten non” said George Kasigaire an elder in the village “since this has come up and it’s a social need, we have to pay any price so as to seize it” he added with a notable smile over his face Immaculate Katushabe another resident interjected noting the burden they go through in trying to raise the family without water, she pleaded to men for quick intervention saying it is what delays them from puying food on the table because they tread long distances for water “Men please, kindly come to our rescue by giving in your labor at will” she implored “it takes us 2 to 3 hours to get a Jerrycan of water that is even too dirty” she imploringly added. Residents in Bunusya and Rwemigina up to now depend on seasonal rain water and resort to swamp water when ponds deplete during a dry spells. They say on top of fearing for their children who have to penetrate the thick swamp for water, they also fear for their health. “this swamp never dries up at least but on top of our children who move more than 2km for water, we also fear for our health because this water is contaminated, all exhausts from Mbarara municipality and uphill collect here” says Stephen Muhumuza a resident. He told pan African vision that 3 children have so far drowned in the swamp in a stretch of 2 years past. Considering the geographical terrain, all the two parishes of Bunusya and Kamurangire with their 11 cells lie in the valley and the Akashengye swamp is the only existing catchment to exhausts from Mbarara town. The chairperson Lc3 for Kakiika division Benon Muganga said the scheme will not compensate anyone whose property such as land will be encroached on noting that the government did not give them any money for the scheme. “We expect residents to lend us their land out of free will because this came in as an offer that is to our benefit” he said adding that residents will give in a helping hand in digging pavements for underground water pipes that will cover a 6km distance from Koranorya to Bunusya and Kamurangire. While chairing the meeting, the district LC5 Godfrey Baryomunsi said the work is projected to take 3 months before completion, however, Emmanuel Mujuni the National water Engineer said the quick progress of the process will depend on how fast the community plays the part it committed itself too. Baryomunsi urged residents to avoid politicizing the scheme and cooperate in volunteering this free service. Over 930 families with 9200 population have been affected by this water shortage. *Journalist at Radio west/Vision group]]>