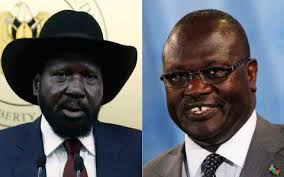 Friends turn Foes:President Salva and former Vice President Machir[/caption] South Sudan’s crisis began just two weeks ago, on Dec. 15, and it already has observers warning that it could lead to civil war. Fighting has killed an estimated 1,000 people and sent 121,600 fleeing from their homes. International peacekeepers are preparing for the worst; some have been killed and a number of them, including four U.S. troops, have been injured. What’s happening in South Sudan is complicated and can be difficult to follow; understanding how it got to be this way can be even tougher. Here, then, are the most basic answers to your most basic questions. First, a disclaimer: This is not an exhaustive or definitive account of South Sudan and its history — just some background, written so that anyone can understand it. 1. What is South Sudan? South Sudan is the world’s newest country. It’s located in Central Africa, is about the size of Texas and has about as many people as Ohio (11 million). South Sudan is one of the poorest countries in the world, has a 27 percent literacy rate and is so underdeveloped that it has only about 35 miles of paved road. Its economy is driven by oil exports. South Sudan declared independence from the rest of Sudan on July 9, 2011. At the time, it was considered a huge success for the world. But its 2½ years as a sovereign state have been disastrous. This latest crisis is just another part of the country’s struggle to stand on its own. 2. Why are people in South Sudan killing each other? The violence started on Dec. 15, when troops in the presidential guard started fighting against one another, in what is a depressingly accurate metaphor for South Sudan’s problems. That fighting quickly spread and is now engulfing entire swaths of the country. If that seems like a strange way for a potential civil war to start, it will make more sense once you hear the backstory. In July, the president of South Sudan, Salva Kiir, fired his vice president, Riek Machar. The two were more rivals than partners; Kiir thought that Machar was gunning for his job. Here’s the really important thing: Kiir and Machar are from different ethnic groups, and in South Sudan ethnic groups are really important. Kiir is ethnic Dinka, the largest of South Sudan’s many ethnic groups. Machar is Nuer, the country’s second-largest group. Tension between the Dinka and the Nuer goes way back in South Sudan, and the political rivalry between the groups’ two most powerful members, Kiir and Machar, always had the potential to become an ethnic conflict. It did on Dec. 15, when members of the presidential guard who are Dinka tried to disarm members of the guard who are Nuer, maybe because they feared the Nuer would try to stage a coup. (Kiir later said the fighting had started because Machar had tried to stage a coup, although evidence for this is thin.) The fighting between Dinka and Nuer presidential guards very quickly spread across the country. The main antagonists are rebels, often ethnic Nuer, including a group called the White Army. (Some reports say the group got its name because fighters smeared themselves with white ash to protect themselves from insects.) The rebels have seized territory, including some oil-producing land, and may or may not be marching on the city of Bor. 3. How could that one little incident spark such a big conflict? When fighting spread from a few presidential guards to entire areas of South Sudan, we saw something that has happened before in sub-Saharan Africa. Political leaders and grass-roots militants alike defaulted from their national identity to their ethnic identity. Political rivalries became ethnic conflicts. Competing against the other group became more attractive than cooperating. Since they won independence, it’s been hard for South Sudan’s ethnic groups to get along. Southerners don’t have that common enemy uniting them anymore. Worse, they don’t have a strong sense of belonging to a shared nation. People have been identifying by ethnicity for so long that they often still do. Another big problem is that South Sudan is extremely poor but has lots of oil; that makes it very tempting for ethnic groups to compete for the scarce resources they so badly need. If this were, say, Iceland, then a contentious rivalry between the nation’s two leading politicians would probably be seen as just political infighting, or at most perhaps a clashing of political parties or ideologies. But Kiir and Machar are the two most powerful people from their ethnic groups in a country where ethnic grouping is very important. So a fight between those two men was bound to exacerbate tension between their respective ethnic groups, which also have lots of other people in positions of power. And they have militias. 4. I thought giving South Sudan independence was supposed to stop ethnic fighting. Why didn’t it? The tragedy of South Sudan is that the same forces that helped it win independence also set it up for this conflict. People in southern Sudan spent decades fighting for autonomy from the north. This led them to organize themselves by their tribe or ethnicity, since they had no national identity to align with. It also led them to form militias. Those militias, sometimes organized by tribe or ethnicity, came together as the Sudan People’s Liberation Movement (SPLM). The SPLM has since become South Sudan’s national army. When the south’s ethnic groups were fighting on the same side, against the north, they mostly got along okay. But, in 1991, the SPLM split along ethnic lines. Some fighters who were ethnic Nuer formed their own semi-official breakaway group, the White Army, which attacked Dinka civilians in the city of Bor, killing 2,000. That fighting stopped, but the White Army has stuck around, in part because some Nuer fear they will not be treated fairly by the Dinka, who are more numerous and who hold the country’s presidency. 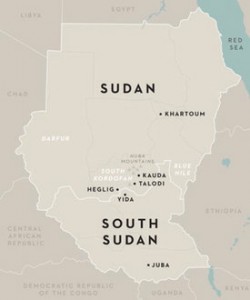