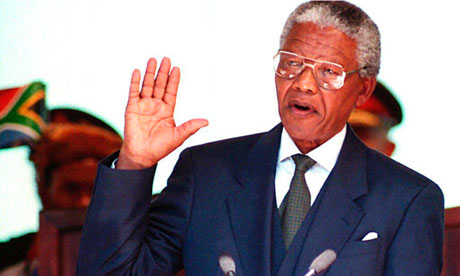 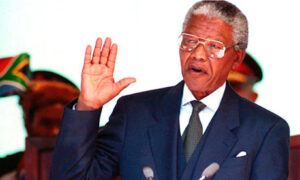 Nelson Mandela takes the oath during his inauguration as South African president in Pretoria on 10 May 1994. Photograph: Walter Dhladhla/AFP/Getty Images

President Nelson Mandela was truly a transformative force in the history of South Africa and the world. My heart weighs heavy about his transition, but we are reassured because his life was full, and we know the imprint he left on our world is everlasting.

If ever the teaching that “Suffering breeds character. Character breeds faith. In the end faith will not disappoint” rang true, it did in the life of Mandela.

Mandela was a transformational figure; to say he was a “historical figure” would not give him his full due. Some people move through history as being the “first this or that” – just another figure in a lineage of persons. To be a transformer is to plan, to have the vision to chart the course, the skills to execute. To be transformational is to have the courage of one’s convictions, to sacrifice, to risk life and limb, to lay it all on the line. “Historical figures” will reference Nelson Mandela.

I recall marching against apartheid with Oliver Tambo and the enormous rally at Trafalgar Square in November 1985. I later met with the prime minister, Margaret Thatcher to decry Britain’s economic, political and military support of the apartheid regime. Let us not forget that Britain, the US, all of the western powers, labelled Mandela a terrorist and steadfastly propped up the apartheid regime – they were on the wrong side of history. I appealed to her to support the release of Mandela, and departed for South Africa.

My heart burst with excitement on that day of Mandela’s release from Victor Verster prison, 11 February 1990. When word got out about his impending release, maids started doing the toya toya in the hallways, beating pots and pans, weeping and demonstrating. “In the end, faith will not disappoint.”

I met Mandela and Winnie at City Hall, and when we spoke later at our hotel, he thanked me and recalled hearing about my 1984 convention speech. Even from his jail cell, he was keenly aware of the outside world, and the ebbs and flows of the world. Three years later, as part of the official US delegation, I was honoured to celebrate Nelson Mandela’s inauguration as president of the new, free South Africa. 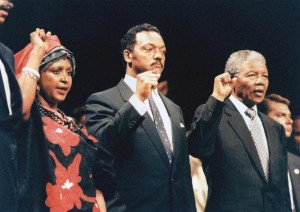 We forged an everlasting relationship. We’ve welcomed him to our home and headquarters in Chicago. We’ve met numerous times in South Africa – the last time in 2010 where we spoke about boxing, sports, politics and traded baseball caps.

Mandela was a giant of immense and unwavering intellect courage and moral authority. He chose reconciliation over retaliation. He changed the course of history.

Now, both South Africa and the US have unfinished business to complete.

Nelson Mandela is not gone, he remains with us always. He’ll always be a chin bar to pull up on. He has indeed forged South Africa as a new “beauty from ashes”. He has left this earth, but he soars high among the heavens, and his eloquent call for freedom and equality is still heard amongst the winds and the rains, and in the hearts of the people the world over.