UNITED NATIONS — The United Nations Security Council on Friday rejected a resolution that would have delayed the International Criminal Court trials of Kenya’s president, Uhuru Kenyatta, and his deputy, William Ruto.

Only seven of the 15 members of the Security Council voted in favor of the resolution – two votes short of the required nine. The remaining eight members of the Council abstained.

Kenyatta and Ruto are both accused of crimes against humanity for their alleged roles in the violence after Kenya’s 2007 election that left more than 1,100 people dead. Both men have denied the charges.

The trial of Kenyatta before the International Criminal Court in The Hague was originally set to begin earlier this week but was postponed until February 5.

The resolution to delay the trial for a year had been pressed by the African Union and was brought to a vote despite the wide expectation that it would fall short of the required nine “yes” votes. African diplomats said they had been hoping against hope that they would find the additional two votes to gain approval.

Kenya’s representative at the United Nations, Macharia Kamau, was blunt in expressing his disappointment. “The deferral has not been granted. Africa’s request through abstaining votes cast by certain members in this council has been turned down. Reason and the law have been thrown out the window, fear and distrust have been allowed to prevail. Africa is disappointed and we regret this very much.”

Rwanda was one of three African members of the Security Council voting for the deferral resolution – the other two were Togo and Morocco.

Supporters of the resolution argued that Kenya’s leaders are needed at home to fight the threat of terrorism, especially after the al-Shabab attack on a Nairobi mall that killed more than 60 civilians.

Rwanda’s ambassador, Eugene Gasana, said, “His excellency President Uhuru Kenyatta and the deputy president, William Ruto, should be respected, supported, empowered, not distrusted and undermined in this time. That is why, after this morning’s vote, Rwanda expresses its deep disappointment.”

Representatives of the eight nations abstaining in the Security Council vote argued that the rule permitting a trial delay relates to matters of international peace and security. They said that does not apply in this case. They also held out the hope for continued discussion of the trial during a meeting next week of countries that are parties to the International Criminal Court. 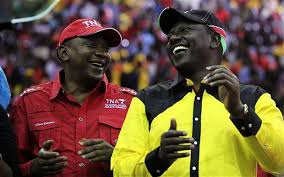 Among the abstainers in Friday’s vote was the United States, represented by Ambassador Samantha Power. “The families of the victims of the 2008 post-election violence in Kenya have already waited more than five years for a judicial weighing of the evidence to commence. We believe that justice for the victims of that violence is critical to the country’s long-term peace and security. It is incumbent on us all to support accountability for those responsible for crimes against humanity,” she said.

Guatemala’s representative, Gert Rosenthal – who also abstained – told the Security Council that the progress in building a partnership between the Council and the African Union was compromised by the vote.

Perhaps the damage is not irreversible, he added, but clearly there was a misunderstanding and both sides were unable to reverse what he called “the regrettable outcome.”

The one New Year’s resolution you might actually keep