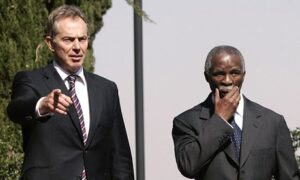 Tony Blair and former South African president Thabo Mbeki clashed on Wednesday over claims that Britain had been prepared to use military force to overthrow Zimbabwean president Robert Mugabe.

Mbeki alleged that the former British prime minister pressured him to join a “regime change scheme” as Zimbabwe plunged into a political and economic crisis in the early 2000s. But the claim was strongly denied by Blair’s office.

Both the UK as its former colonial power, and South Africa, its most powerful neighbour, have long played an intimate role in Zimbabwean affairs. But their leaders were divided on how to act when it descended into chaos following the violent seizures of white-owned farms. Blair, who had made a triumphant military intervention in Sierra Leone, was determined that Mugabe should step down whereas Mbeki was ready to accommodate him.

“The problem was, we were speaking from different positions,” Mbeki said in an interview on al-Jazeera. “There were other people saying, ‘Yes indeed there are political problems, economic problems, the best way to solve them is regime change. So Mugabe must go’. This was the difference. So they said, ‘Mugabe must go’. We said ‘But Mugabe is part of the solution to this problem’.”

Mbeki made reference to a retired British general, thought to be Lord Guthrie, who was chief of the defence staff during the first Blair government. In an interview in 2007 Guthrie recalled that “people were always trying to get me to look at” toppling Mugabe by force, though he did not mention Blair by name.

Mbeki, who succeeded Nelson Mandela in 1999 and lost power in 2008, said: “There is a retired chief of the British armed forces who said he had to withstand pressure from the then prime minister of the United Kingdom Tony Blair … Tony Blair who was saying to the chief of the British armed forces, ‘You must work out a military plan so that we can physically remove Robert Mugabe’.

“We knew that because we had come under the same pressure that we need to cooperate in some scheme. It was a regime change scheme, even to the point of using military force and we were saying no.”

Solidarity and anti-colonial sentiment remains strong among Africa’s liberation movement leaders. Mbeki condemned the way in which Britain presumed it could still meddle in Zimbabwean affairs. “You are coming from London, you don’t like Robert Mugabe for whatever reason – people in London don’t like him – and we are going to remove him and therefore it means we are going to put someone else in his place?

“Why does it become a British responsibility to decide who leads the people of Zimbabwe? So we’re saying, ‘No, let Zimbabweans sit down, let them agree what they do with their country.'”

Mbeki later helped broker a power sharing agreement between Mugabe’s Zanu-PF party and the Movement for Democratic Change (MDC) following a violent election in 2008 that cost at least 200 lives. But he was strongly criticised by the MDC for siding with Mugabe and devising a “conspiracy” to divide and weaken the opposition.

Mugabe remains the only leader Zimbabwe has known since it gained independence from Britain in 1980. He continues to use anti-British rhetoric to whip up support and has singled out Blair for particular criticism, once declaring at a summit of world leaders: “So Blair, keep your England and let me keep my Zimbabwe.”

The 89-year-old has often accused Britain of using sanctions, and backing the MDC, in an attempt to effect regime change. He claimed Britain sent hit squads to kill cabinet members. In 2000 Zimbabwe’s state television even reported that a British invasion force had been deployed in neighbouring Botswana, making the unlikely claim that a naval flotilla was present in the landlocked Okavango delta.

Tendai Biti, a veteran MDC politician who became finance minister in the unity government, said he had never heard the claim of a possible British military intervention before. “It’s a serious allegation to make and I think there should be evidence,” he said.

Despite years of persecution by Mugabe, the MDC would not have welcomed external military intervention, Biti insisted. “It could not have worked. The people of Zimbabwe and the MDC do not believe in violence and do not believe there can be any solution other than a sustainable democratic process. If you look at the history of Africa, it is littered with civil wars and coups; the violence is cyclical.”

He added: “The British would have invaded for what? Certainly not for [MDC leader] Morgan Tsvangirai who would have refused to assume power under any undemocratic conditions.”

On Wednesday he denied Mbeki’s allegation. A spokesman said: “Tony Blair has long believed that Zimbabwe would be much better off without Robert Mugabe and always argued for a tougher stance against him, but he never asked anyone to plan or take part in any such military intervention.”

Mbeki stuck to his guns, however. His spokesman Mukoni Ratshitanga said: “Former president Thabo Mbeki maintains what he told al-Jazeera as a factual and accurate account of what happened.”

South Africa’s Zuma to set up inquiry into graft claims