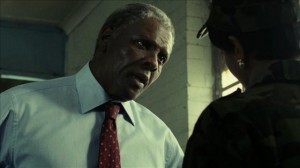 Anant Singh set out to shoot a film about the life of Nelson Mandela. It took about a quarter-century—almost as long as South Africa’s first black president spent in prison.

Mr. Singh broached the idea in the mid-1980s. The filmmaker was becoming more politically active and Mr. Mandela, the towering figure of the black-liberation movement, was well into his second decade in jail. In a message passed on by a mutual friend, Mr. Singh established contact with the world’s most famous political prisoner. He suggested Sidney Poitier would be ideal for the lead. According to Mr. Singh, Mr. Mandela replied that Sidney Poitier was a big star. “Why would he want to play me?”

Mr. Singh eventually won the rights to Mr. Mandela’s autobiography, after it was published in 1994. Nearly two decades later, on Thanksgiving weekend, “Mandela: Long Walk to Freedom” will open in the U.S.

The movie, starring British actors Idris Elba and Naomie Harris as Nelson and Winnie Mandela, has been warmly received on the film-festival circuit. Earlier this month, President Obama screened the movie at the White House. The film’s backers, which include North American distributor the Weinstein Co., are aiming for Oscar consideration.

To get to the big screen, however, was no easy feat. There were at least 33 script drafts; four different directors; and years of Mr. Singh trying to convince wary Hollywood executives that Nelson Mandela’s life could be a film—not a television series.

For a while, Morgan Freeman was under consideration for the part of Mr. Mandela, until he opted to star in “Invictus,” the 2009 movie about how the black South African president mended ties with the largely white South African rugby squad. Denzel Washington was also considered, say people involved in the project. Representatives for the actors didn’t respond to requests for comment. “To be honest,” says screenwriter William Nicholson, who bowed out of the project before returning to write the final version, “I never thought it

How it came to be is the tale of the minor political activist who became a major South African film producer. Mr. Singh’s uncompromising stance on his biggest project, perhaps the one he cared about most, meant “Mandela” almost didn’t get made.

In the end, he raised the movie’s $35 million budget, which allowed him to keep creative control. Script, director, actors fell into place. Meantime, Mr. Mandela’s deteriorating health heightened interest in the legacy of the South African leader, who is now 95 and critically ill. 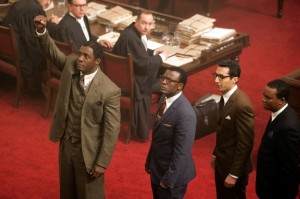 Picking at a lunch of grilled chicken in the offices of his company, Videovision Entertainment, Mr. Singh admits the extended gestation generated legions of skeptics and risked torpedoing the project. “When you hold on to a film for that long, it’s quite likely going to languish in perpetuity,” says the 57-year-old producer. The project became “not so much a passion as a necessity. It was the right thing to do.”

Mr. Singh used his first job at a video-rental store to arrange a covert screening of the 1973 James Bond movie “Live and Let Die” to nonwhites. (South African authorities, apparently sensitive to the scene where a black villain slaps a white woman, had restricted the movie to whites only, Mr. Singh recalls.) Police raided the screening, arrested and briefly jailed him.

As a young man, Mr. Singh took aim at the apartheid system that segregated people by skin color. He made “Place of Weeping,” about a black farmhand beaten to death by his white boss. He made the film with Darrell James Roodt, a director who would team up with Mr. Singh on “Sarafina!” and “Cry, the Beloved Country”—two other films that examined the tinderbox of South African race tensions.

In 1990, Mr. Singh was just beginning to produce “Sarafina!” when he got a call at five in the morning from Fatima Meer, Mr. Mandela’s biographer and mutual friend. He was told to rush over to her house, where he found Mr. Mandela, only weeks out of prison, in the living room.

Mr. Mandela encouraged him to make “Sarafina!,” the movie about the 1976 Soweto student uprising, saying the story needed to be told.

Over the years, Mr. Singh would continue to ask when he could tell Mr. Mandela’s story. The reply was always: “Are you sure?” Other films would be made that focused on specific points of Mr. Mandela’s life, such as “Invictus.” But Mr. Singh said he had a more ambitious movie in mind. It would use Mr. Mandela’s grand and sometimes messy personal life to focus on how apartheid came undone. When Mr. Mandela finally awarded Mr. Singh the movie rights to his autobiography, the filmmaker faced a new challenge: How to capture Mr. Mandela and the liberation movement in a two-hour movie?

The project got off to rocky start. When returning from a research trip to Robben Island, where Mr. Mandela was incarcerated for 18 years, the vehicle that Messrs. Singh and Nicholson were riding in spun out of control and crashed. Mr. Nicholson broke his nose, dislocated his shoulder and missed a meeting with Mr. Mandela.

Mr. Nicholson says he aimed for historical sweep in his early drafts. He began one at the 1918 signing of the Treaty of Versailles to end World War I. That was the year Mr. Mandela was born. Shekhar Kapur, who was attached for a time as the director, said he wanted a grittier film that showed the brutality of apartheid in South Africa’s townships. When Mr. Nicholson couldn’t deliver, he left the project. Then when Mr. Singh didn’t get the movie he wanted, he brought Mr. Nicholson back.

The director who wound up shooting the film, Justin Chadwick, also wanted a personal movie about Mandela. The director, producer and writer all agreed on a central focus: The romance of Nelson and Winnie. The so-called “love tragedy” provided a way to tell the story of a man who rescued his country from violence, but couldn’t stop his second marriage from collapsing.

For Nelson Mandela, Mr. Chadwick enlisted Mr. Elba, who played drug lord Stringer Bell in the HBO series “The Wire.” Even after Mr. Elba was cast, though, Mr. Singh wasn’t confident the actor could master a crucial element of the role—Mr. Mandela’s quirky accent. Tony Kgoroge, who plays the South African leader Walter Sisulu in “Mandela,” says Mr. Mandela sounds as if he’s inhaling when he talks. Mr. Elba worked an hour a day with an accent coach. 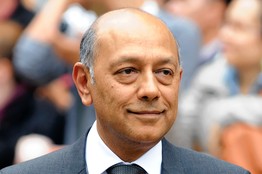 One of the final tests came about a year ago, when Mr. Singh showed pictures and clips from the movie to the former president. They included Mr. Elba—made-up as the elderly Mandela—walking in the hills of his home village, children trailing behind the slightly-stooped figure as the sun set. Mr. Mandela seemed to recognize himself. “Is that me?” he joked at one point, according to Mr. Singh.

For the filmmaker, the quip offered a hopeful sign he may have succeeded portraying the man and his comrades whose long struggle brought down the apartheid government. “What I learned from this story is…the one thing that they did have is faith that the liberation would arrive. How long is another matter,” Mr. Singh says. “I think they felt it would arrive sooner and I thought this movie would get made sooner.”