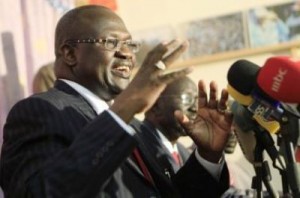 November 28, 2013 (JUBA) – The office of the first deputy chairperson of the ruling Sudan People’s Liberation Movement (SPLM), Riek Machar has announced he will hold a press conference “soon” to address the nation on the party’s future and other pressing issues facing the country.

A brief statement extended to Sudan Tribune on Thursday, said the event will reportedly unveil resolutions passed against the actions of party chairperson and South Sudan’s president, Salva Kiir.

The date and venue of the press conference has yet to be announced.

The statement revealed that the leadership of the SPLM’s Political Bureau (PB), comprising many of its senior figures, had consulted on Thursday in Juba at a meeting chaired by the country’s former vice-president.

The meeting reportedly discussed Kiir’s recent statement at length, in which he announced that the party had dissolved itself because its structures ended their five-year mandate in May this year, leaving only his office and the national secretariat functional.

The dissolved structures include the PB and the National Liberation Council (NLC).

Kiir said he had “all the powers” to form a special organising committee in preparation for a planned national convention.

Machar reacted angrily to the decision, accusing the president of violating the constitution. He warned on Tuesday that the other majority members of the PB were considering taking action against Kiir unless he reversed the decision.

Thursday’s leadership consultative meeting reportedly decried the chairperson’s statement as a violation of the party constitution.

“We confirm that it is only the ordinary party congresses and the convention that dissolve the structures at each level”, the statement said.

The details of further resolutions passed by the leadership against Kiir’s decision are also expected to be unveiled during the press conference.

Machar’s office said all local and international media houses have been invited to attend the event at a date and venue to be announced in “the coming days”.

The statement also revealed that the leadership has already been lobbying members of the national legislature to pass a resolution in parliament recognising the outcome of the recent unilateral Abyei referendum, in which the Ngok Dinka community voted overwhelmingly in favour of joining South Sudan.

It said teams had been dispatched teams to various states across South Sudan as part of a campaign to garner support at state and county level.