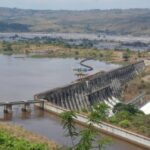 The roaring waters of the Congo River have the power to light up much of Africa – such is its huge hydroelectric potential.

It has been a long-held continental dream to harness this renewable energy, but given the Democratic Republic of Congo’s chequered past, it seemed likely to remain just that.

However, thanks to a recent deal signed by South Africa promising to buy electricity from a planned hydroelectric project, in eight years’ time it may start to become a reality.

The Bundi valley, which lies parallel to the Congo River and where some 30,000 villagers live, will be flooded with water and dammed to become a giant lake.

The whole project is known as Grand Inga – and when fully completed will be the world’s largest hydroelectric plant with more than twice the power generation of the Three Gorges Dam in China.

The site for the project is in Bas Congo, a province at the extreme south-west of DR Congo, about 50km (30 miles) from the mouth of the river where there are powerful rapids and waterfalls.

“There will only be one dam wall,” Bruno Kapandji, DR Congo’s minister of hydraulic resources and electricity, told the BBC.

“But there will be six different hydroelectric power stations around it to produce up to 40,000 megawatts (MW) of electricity.”

Each of these power stations will represent a separate phase in the project, but the electricity is supposed to come online by 2020 when the first, Inga 3, is due to be completed.

It will produce 4,800MW of electricity, 2,500MW of which will go to South Africa and 1,300MW to Katanga, where it will be used in the region’s rich mines.

Mr Kapandji says there are such huge needs across the continent that DR Congo is guaranteed to find customers when the other sections of the dam are built.

“We already have a deficit of more than 300MW today in Katanga,” he says.

“In 2020 we’ll have a deficit of more than 2,000MW in the main mining province, if we stay in this situation, but there is also the deficit in South Africa, the deficit in Nigeria.

As well as building the dam wall and Inga 3 hydropower plant by 2020, two new power lines will also be laid.

One will go to South Africa and another to the capital, Kinshasa, as existing cables do not have sufficient capacity to carry the huge volumes of power expected.

The construction works for the first phase of the project will be funded by the World Bank, the African Development Bank and private investors yet to be found.

“Now that we have a credible customer, South Africa, finding investors to build the dam won’t be a problem,” says Mr Kapandji.

As for the following phases of Grand Inga, there are no confirmed customers yet, but the minister says Nigeria has already expressed interest in buying 3,000MW.

The 145m (475 ft) tall dam will be adjustable, and as the project reaches its next phases, the wall will be adjusted to let more water flow in.

But trying to provide for the whole continent seems ambitious for a country where barely 10% of the population have access to electricity.

In the capital only wealthy families have power generators at home, and for the vast majority of people, electricity is a luxury.

“We have power a few hours a week, never in the evenings,” says Armel, a student who lives in one of the poorest areas of the capital.

His neighbourhood, Camp Muganga, looks like a huge village.

There are small stands with noisy generators where you can charge your mobile phone battery for a few hours at the cost of a few hundred Congolese francs, the equivalent of a few cents.

“You organise your life around the power shortages,” says Armel.

“We do as much as we can during the day and in the evening we use flashlights and candles.”

Following President Jacob Zuma’s visit to Kinshasa last month when he signed the electricity deal, many of the city’s residents have been questioning why electricity produced by the Congo River will go south when there are such huge needs at home.

The Congolese government says it aims to avoid repeating past mistakes – it wants to make sure the Inga project can be a viable business.

In the 1970s and 1980s, when former President Mobutu Sese Seko oversaw the construction of the Inga 1 and 2 dams, most of the electricity produced was for domestic consumption.

But 10 years after they were built, both dams were dilapidated because of a lack of funding.

“If things didn’t work out the way we wanted them to, it’s because we didn’t have money,” Daniel Yengo, the former head of the public electricity company, Snel, told the BBC.

“Our only source of income was electricity sales, and our biggest customer was the state, which consumed about 40%,” he said.

“But the state never paid its bills. So I knew what needed to be done to ensure a proper maintenance of the dams, but I just couldn’t do it because we didn’t have the necessary means.”

Even today, Mr Yengo says the government only pays about two thirds of its bills to Snel.

During Mobutu’s time in power, corruption was endemic and inflation was so high that prices in shops could change several times a day.

Inga was only one of several of the former president’s ambitious projects to fall prey to mismanagement.

Today the country is still estimated to be one of the most corrupt in the world, but the economy has stabilised.

Mr Kapandji says the new venture will be completely different.

“Grand Inga will be privately managed and privately funded, it won’t be a public company with all the risks that that would comprise,” he said.

But several local non-governmental organisations are sceptical about the government’s intentions.

“All they would have to do is renovate Inga One and Two. That would be enough to provide electricity for the whole country,” says Jean Marie Muanda from the rights association Action for Development and Life.

“Why start this project when there are already so many management problems with the existing ones?”

He is also worried about the social impact such a project could have on the people who live near the dam.

When construction begins in two years’ time, a transfer canal will be built from the river to the valley which will be flooded.

The village of Mvuzi Three is one of the closest to the future site of Inga Three.

“I remember when they told us Inga One and Two would be built,” recalls the village chief, Joseph Mvuzi.

“They promised us jobs, and we thought things would get better – but we got nothing. We don’t even have electricity and running water.”

Now he does not expect anything positive from the new project and he worries for the future.

The villagers have not yet been told where their new home will be, although the government says it has identified a site for them and they will be financially compensated.

“How will we live? Will we have farmlands, will our children be able to go to school?” Mr Mvuzi said.

Mr Kapandji says he is aware of the scepticism, but he is adamant that this time President Joseph Kabila’s political leadership will make the difference.

For Mr Yengo, failing to take advantage of this opportunity would be a mistake for all of Africa.

“Inga is an exceptional site and it has to be used,” he says.

“The electricity demands are always growing in the country and in the region.

“I think if everyone pays their bills, if the maintenance is properly done and the machines are not overused, there’s no reason it shouldn’t work.”