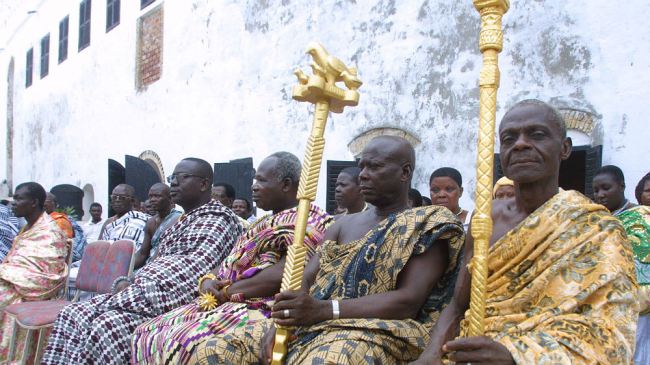 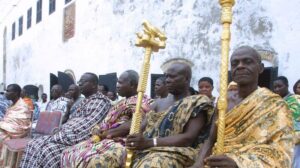 Local chiefs wait for visiting Dutch Crown Prince Willem Alexander and Princess Maxima at Elmina Castle April 15, 2002 in Ghana. From Elmina the Dutch shipped over 50,000 slaves to Surinam and an unknown number to other destinations in North and South America. (Photo by Michel Porro/Getty Images)

We are now living in a time when Africa evokes images of vibrancy and growth instead of poverty, war and struggle.

In this context, Ghana is fast becoming a mecca for black Americans who are looking for lucrative opportunities in a new environment. According to recent reports, about 10,000 African-Americans visit Ghana yearly. Currently almost 3,000 American blacks reside in the capital, Accra, the major hub of Ghana.

Signs of a growing trend

While these numbers are not huge, they are still significant. Almost six years ago there were only 1,000 African-American expatriates living in Ghana, so clearly the numbers are rising steadily.

What has attracted them? The fact is this burgeoning nation has consistently enjoyed a peaceful political climate without many threats of internal or external strife since it gained its independence from the British back in 1957. The temperate weather also makes it an attractive choice.

But most importantly, there are elements that could resonate with anyone seeking a more laid back lifestyle. The pristine beaches, affordable living and a sense of spiritual calm that permeates the landscape makes Ghana an attractive alternative to the proverbial American “rat race.”

Ghana is living up to that hype, in addition to being a land of economic opportunity and bountiful resources.

Why relocate to Ghana?

Most Americans are starting to grasp the notion that they may have better luck financially in another country. As the American economy continues to falter, some blacks are finding that places new and unfamiliar could challenge them in ways leading to upward mobility.

Monies saved and invested elsewhere can yield bigger dividends. The educational attainment of many African-Americans can be put to immediate use in countries that have not been able to offer their populations similar luxuries until recently.

Much has been written about American blacks moving to South Africa for these very reasons, but I would like to suggest Ghana be added to the short list of locales for those considering planting new roots in the Motherland.

There are a plethora of companies in Ghana eager to recruit foreign applicants. If you are lucky enough to be well versed in all things digital, securing employment with a well-established technology firm is a strong possibility. Organizations such as Blogging Ghana have created platforms for interactivity within the social media realm that are reaching a global audience. Employees of such firms will have the opportunity to be proponents for change in an emerging field.

Or you can more easily start a family business. More than half of the African-Americans that reside in Accra are entrepreneurs. Local chiefs are often more than willing to grant prized land and other resources to budding entrepreneurs interested in real estate development, or other commercial ventures. This could also lead to a lucrative life in farming – or “agribusiness” – for those interested in a totally new, yet viable way of making a living.

Teaching is another highly desirable profession. English is the official language of Ghana; thus, entering academia as a teacher of the language could be one means of entrance into a coveted class. Plus, there are many supports extended to foreign pupils and the qualified staff who instruct them. You and your family could benefit from this aspect of the economy as native speakers.

But nothing comes easy. Newly minted migrants have encountered some issues adjusting to the regulatory patterns and overall atmosphere of their adopted homes. As progressive as Ghana is compared to their regional neighbors, there are still some difficulties that arise when it comes to everyday comfort. Coming from a Western culture creates certain expectations, and the thought of not having stable electricity, or constant running water can be a pain. Yes, this does happen, and may be a deal-breaker.

In addition, government agencies can also be hard to work with and in some cases they can prolong the process of becoming a citizen, which will limit your access to certain jobs. But, for many recent immigrants, aside from the “malaria issue” (which unfortunately is still the norm), settling in Accra isn’t nearly as intimidating as one would imagine.

Most importantly, acquaint yourself with the history of this very diverse country. Many Ghanaians are well traveled and knowledgeable about world affairs, so you have to be able to hold your own.

You have to look before you leap, so it’s advisable to visit first before you make such a drastic decision. You should ideally be armed with a well-drafted blueprint of what your vocation will be and have a few promising options lined up to assuage any doubts. Yes, it can take a considerable amount of time to achieve residency, but if you like Ghana and want to take a risk in your quest for a better life, you will likely succeed.

Ghana is the perfect choice if you are looking to experience living in Africa, because it has managed to take advantage of global opportunities, which has allowed the country to develop a comfortable level of stability. African-Americans will enjoy making a life in a place that will make them feel connected and celebrated in a way that they probably don’t fully enjoy in the U.S. as “minorities.”

Plus, you don’t have to be a millionaire in order to live quite decently. Moreover, there are resources available, like The African American Association of Ghana (AAGG), to help make your transition a smooth one.

Overall, you will be living among a people who are just as excited to get to know you as you are to know them. Ghanaians are very hospitable, which makes it easy to make friends and quickly build a network, which is ultimately the key to survival in any foreign country.

That’s what makes Ghana a welcoming and worthwhile choice for African-Americans who might be thinking of relocating to a new land of opportunity.