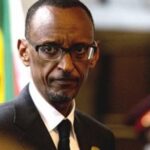 In November 2012, I wrote a piece with the title, “The Tragedy of Goma” in which I made a conclusion that now appears prophetic:

“As Goma fell to Rwanda’s troops President Museveni of Uganda and President Kagame of Rwanda, both condemnable co-authors of this latest outrage against the Congolese people, met President Kabila of DRC in Kampala in a sham diplomacy designed to serve him with a fait accompli and an ultimatum to accept M23 as a Congolese organization with legitimate demands. Even then, Kagame must know this: it will be a futile exercise since, like all his ventures in DRC, he will be forced to abandon it, leaving with bags of coltan, diamonds and gold, and behind him a trail of blood, tears and sweat of Rwandans and Congolese. DRC will, sooner than later, prove to be Paul Kagame’s Achilles heel, as wars that he has perpetuated abroad finally reverberate on the hills of Rwanda. This worst case scenario is not inevitable, but the time to act to prevent continuing bloodshed is now.”

Since then more Congolese and Rwandan blood has been shed and millions of Congolese people displaced.

The last few days have been, like most events in the Great Lakes region, very dramatic. Kagame’s proxy creation, the M23, has, according to Martin Kobler, the United Nations Special Envoy to the Democratic Republic of Congo, “seen its military end.”

M23’s fortunes, essentially Kagame’s, are confined to “a small triangle close to the Rwandan border.” The last 12 months have been what in Latin is termed, “Annus Horribilis” or a horrible year for His Excellency Paul Kagame.

It is too early to write an epitaph on Kagame’s dangerous and costly ventures in DRC. However, it is clear that times have changed, and that the game-changers are South Africa and Tanzania as SADC’s Force Intervention Brigade, coupled with renewed commitment of the Congolese Army. It is this new factor that makes both President Kagame and President Museveni, long used to have free but disruptive hands in DRC, very uneasy and scrambling for ways to respond to the new realities.

How will President Kagame respond?

First, Kagame looks at Rwanda, Congolese and African people as “expendables” in his quest for maintaining his dictatorial power in Rwanda, and projecting it into DRC. For now, he might decide to sacrifice the Congolese Tutsi in M23, take them into Uganda and Rwanda as refugees, and disarm them. Like Generals Laurent Nkunda (under “house arrest” in Rwanda) and Bosco Ntaganda (now at the ICC), General Sultani Makenga and his colleagues are indeed an endangered species. Knowing Kagame’s psychology, he has, most likely, passed a death sentence to these officers to whom he gave a mission impossible.

Second, he might relocate the remnants of the M23 to south Kivu. Unfortunately, the Tutsi of south Kivu, namely the Banyamulenge, have suffered enough from Kagame’s opportunistic actions in DRC and are not likely to render support to such an adventure.

Third, as has happened in the past, when his enterprise in DRC has suffered setbacks, President Museveni has come to his rescue through sham peace talks under what is called International Conference on the Great Lakes Region (ICGLR). President Kagame and President Museveni use the ICGLR to buy time, and obstruct the role of the African Union, and to fight the SADC (South Africa and Tanzania) presence in DRC.

Fourth, President Museveni and President Kagame have been working hard to lure President Uhuru Kenyatta into their shrinking sphere of influence and to isolate Tanzania in the East African Community. Weakened and frustrated, Museveni and Kagame will most likely deepen the tempo of this action.

Fifth, where other people’s lives are involved, Kagame is a dangerous risk-taker and gambler who can take precipitate actions without considering the costs.

He might, as his Ambassador at the United Nations threatened last Friday, decide to launch a full invasion into DRC, repeating the 1996, 1997, 1998 cycle. He now knows the consequences of: facing South African and Tanzanian troops; a Kagame-weary international community; a more effective Congolese Army; a Congolese state that is striving to be united at the top; a Congolese public that is united against Kagame’s violence; a hostile Congolese Tutsi community that is now aware that they are being manipulated by Kagame for his selfish agenda; and, a Rwandan nation that is opposed to his war-making at home and abroad. Yet, like a losing gambler, Kagame will often raise the stakes in pursuit of his objectives. That is what happened in 1994 when he decided to shoot down the plane, killing President Habyarimana and triggering the genocide. That is what happened in 2001 when, under his orders, President Laurent Kabila of DRC was assassinated.

Within the next two years, as President Kagame’s horizons shrink regionally, internationally, and further with Rwanda, the prospects for civil war within Rwanda will correspondingly increase. Kagame has made enough enemies in Rwanda and the Great Lakes region. In the absence of an African and international effort to compel Kagame to talk peace to his political and armed opponents (including FDLR), these enemies will find just cause and opportunity to take arms against Kagame’s regime, and the consequences will be catastrophic.

Now that Africans through SADC have demonstrated that Africans can make a difference in DRC, this is not the time to sit and relax. What the 20,000-strong, $1.5 billion a year, United Nations MONUSCO could not do over 10 years, Tanzania and South Africa have been able to do in a few months.

SADC should remain deployed in DRC until a peaceful and lasting solution is found for DRC and Rwanda.

*Originally published at Black Star News.Dr. Theogene Rudasingwa was Rwanda’s ambassador to the United States under Kagame’s government. He has since renounced the government over political repression in Rwanda and the Congo misadventures