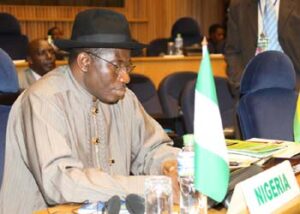 Late this morning, at about 11:46, the National Chairman of the New Peoples Democratic Party (nPDP), Alhaji Abubakar Kawu Baraje, formally announced the merger of the party with the All Progressives Congress (APC). The merger was contained in a communiqué which Alhaji Baraje read to journalists at the end of a meeting between the leadership of New PDP and that of the APC held at the Kano Governor’s Lodge in Abuja. The communiqué signed by Bisi Akande the APC National Chairman and Kawu Abubakar Baraje the National Chairman of NPDP reads, “A meeting of the leadership of All Progressives Congress, APC, and the new PDP met this morning at the residence of the Kano State Governor, Dr. Rabiu Musa Kwankwaso, in Abuja and after exhaustive deliberations the two parties agreed to merge in order to rescue our fledgling democracy and the nation”  .

With this development, the G7 Governors of New PDP, namely, Babangida Aliyu (Niger), Rabiu Kwankwaso (Kano), Sule Lamido (Jigawa), Aliyu Wamakko (Sokoto), Murtala Nyako (Adamawa), Abdulfatah Ahmed (Kwara) and Rotimi Amaechi (Rivers), are now members of the APC. The merger thus shoots up the number of APC State Governors to 18 while PDP’s shrinks to 16, with All Progressives Grand Alliance (APGA) and Labour Party having one governor each. A similar permutation exists in the National Assembly where we now have the majority with PDP and its allies in minority.

The simple meaning of this is that APC is now the majority party in the country while PDP has become a minority party. In the circumstances, President Goodluck Ebele Jonathan must now start writing his handover notes because his ambition to maouevre the party structures so as to get a third term in office in 2015 has suddenly collapsed.

What a sudden change of fortune! What a sad day for the PDP, a party which we laboured to build, which was viciously taken away from us but which, out of our great love for it, we did everything humanly possible to save but were frustrated by the unpatriotic elements that have usurped the leadership of the party.

Nigerians could recall that several meetings had been held between the APC leaders and the leaders of the New PDP.  The APC had visited each of our seven New PDP governors in their states to convince them to join its fold but all these notwithstanding while the PDP Leadership on their own side were plotting on daily basis on how to frustrate us out of the party we suffered to nurture. 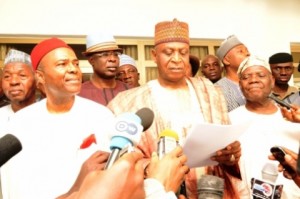 The fact remains that we did all within our powers to reconcile with PDP to no avail and sadly our dear President allowed the hawks within the Presidency and PDP Leadership to convince him to abort our last Sunday’s meeting that would have brought a last peace to our party which the PDP leadership under Alhaji Bamanga Tukur frustrated, so we have no other option than to formally announce the death and burial of PDP. Day and night we cried out, begging whoever loved PDP to join us to rescue the party from imminent doom but we were conveniently ignored and abused. Just last night, we issued the last in a series of passionate appeals to PDP Elders to take urgent steps to save the troubled party in the face of their unbelievable silence in the face of the chain of developments instigated by factional National Chairman, Alhaji Bamanga Tukur, which has put the party at the edge of the precipice.

Now, we have reached the stage that we can only say: “PDP, your sinking ship has been abandoned to you! You brought this misfortune upon yourself, now you must bear it alone!”

As for us, we are happy to belong to the APC, where our value is appreciated, where we are made to feel truly wanted, and where we can now join forces with like minds in our struggle to liberate Nigeria from PDP’s misrule, which is soon to end.