Africa is well positioned to chart the path for transformation through regional integration. But it should go beyond the narrow focus on trade in goods. This was the conclusion reached, following an afternoon discussion that brought together a high-level panel on regional integration featuring representatives from African think tanks and the African Development Bank on Sunday in Johannesburg.

Intra-African trade in goods was reported to be insignificant and the high-level panel suggested that regional integration should also cover: the movement of people to ensure labour mobility, which is vital in bringing wages down; the movement of talent through the promotion of mutual recognition of qualifications in fields such as medicine; and the movement of capital by facilitating stock exchanges cross-listing to enhance capital mobilization.

The Bank’s Energy, Environment and Climate Change Director, Alex Rugamba, underscored the relevance of the theme of this year’s African Economic Conference – “Regional Integration in Africa” – “for Africa seeking larger markets that can support economies of scale and create suitable conditions for investment.

“Regional integration has gained prominence in this continent’s development agenda,” he said.

Litse also pointed to the weak implementation of agreements by African leaders, urging participants “to critically examine the status quo, to dissect the emerging issues and find practical solutions” to these challenges. “Together we can shape the continent’s integration trajectory and make regional integration a success for Africa,” he said.

Presenting the Bank’s regional integration vision, Regional Integration Division Manager Moono Mupotola explained the institution’s commitment and strategy “to unlock Africa’s potential” to enable the efficient flow of goods, services and people. She emphasized the need to consolidate Africa’s small and fragmented markets and address common cross-border issues such as security and climate change. She also affirmed that challenges remained, even though the Bank had invested huge amounts in hard and soft infrastructure as well as in transformative projects.

For her, the challenges include limited capacities to implement common regional projects as well as differences in national priorities, weak productive capacities, major infrastructure gaps, weak implementation capacity at national and regional levels.

With regard to lessons learned, she stressed the need for selectivity, with more focus on policy and institutional aspects of integration, as well as increased political dialogue. “There is a need for more project preparation and mobilizing private funding for regional operations,” she said, adding that the Bank has a lot of ideas, but project preparations have been a challenge.

AfDB’s Research Division Manager, also a discussant, Issa Faye, for his part, made a strong and thought-provoking point, underscoring the need to wonder if the Bank was on the right track, and if its regional integration achievements have effectively benefitted African populations. “Our institution has achieved a lot in terms of procedures, but there is still room for improvement in the area of implementation,” Faye said, further highlighting shared prosperity, politics and democracy as key elements to take into account.

The five panelists who spoke during the second session, chaired by Steve Kayizzi-Mugerwa, Director, Development Research at the AfDB, focused on the priorities and policies with regard to how regional integration can support industrialization. The panelists expressed the need to think outside the box and be strategic in funding regional integration. Other suggestions included ownership of integration issues by Africans, institutional capacity building, provision of adequate budget for research and tackling the challenges and opportunities in creating a vibrant private sector in Africa.

The Chief Economist and Vice-President Mthuli Ncube said integration cannot take place without investing in infrastructure, skills training and education. “Infrastructure is at the centre of regional integration as it enables connectivity,” he said. 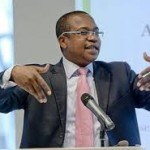 However he emphasized the need to place enhanced emphasis on the often neglected issue of soft infrastructure, such as one-stop border posts. In a continent with the highest number of landlocked countries, Ncube observed the need for efficient ports, arguing that all ports are in fact regional assets. These ports should be served by efficient corridors enhanced by trade facilitation measures. He also highlighted the importance of measuring results, noting that the Bank has made some headway in this area, but more needs to be done.

Victor Murinde, Director of the African Development Institute, recognized the quality of the debates and participants, disclosing that this year’s networking session with African think tanks charted the path for accelerated transformation through regional integration.