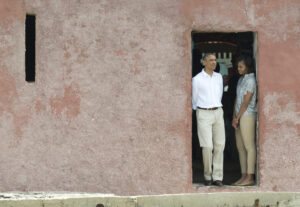 In his initial run for US presidency, Barack Obama had difficulties connecting with the African-American constituency. Firstly, Hillary Clinton was a formidable political rival who had a reasonable claim on the black vote. After all, it was not so long ago that Black Americans glorified her white husband, Bill Clinton, as their first black President.

Additionally, to the African-Americans, Obama was not black enough sentimentally and in experience to be US president. Granted, his father was Kenyan but his mother was white and he was raised by the mother’s white family. He grew up in Hawaii which is hardly known for its black attributes. Finally, there was not a single person in the Obama’s family tree who had experienced slavery. How could Obama understand the needs and aspirations of African-Americans?

Educationally Obama, shot like a rocket from Hawaii to Occidental College, a small private college in Los Angles. He then proceeded to the prestigious Ivy League orbit of Columbia and Harvard Universities. It is while he was at Occidental College that he gave his first political speech at 19 on the ugliness of apartheid in South Africa.

Obama’s educational trajectory was far removed from, if not alien to, that of a typical black child in America; it was privileged. Despite all that, the African-American community voted overwhelmingly for Obama in 2008, perhaps blinded by sentiments of ‘ebony kinship.’ But it was not long before blacks, including Africans, were musing, ‘would we have been better off if Hillary Clinton had become President?’

That question implied that Obama was seen as failing the black world; he was not delivering. Black people had boosted him into the Promised Land, but he was not distributing the manna. For the African-Americans, the ultimate failing grade was obtained in Africa in 2013, at the recent Goree Island during Obama’s first official visit to the continent.

For Black Americans, Goree Island remains an important symbol of slavery and slave trade. It was here that African captives were loaded into slave-ships for the fateful and inhumane trip across the Atlantic bound for the New World. Upon arrival, they entered a life of permanent bondage and servitude. It was here that the slaves were forced through the door-of-no-return and had one final glimpse of the continent of their birth.

It is here too that few contemporary African-Americans are often unable to hold back tears as they relive moments of deep sorrow, over man’s inhumanity to fellow man.

It was during his March-April 1998 visit to Goree Island that former President Bill Clinton wept in grief and nearly apologized for America’s role in slave trade. But he did not apologize.  It was here in 2003 that another former President, George W. Bush, gave a moving speech on the evils of slavery, one of his most sensitive public statements, ever. On this occasion Bush classified slavery and slave trade as “one of the biggest crimes in history.” He outdid former President John Adams who once dubbed slavery as “an evil of colossal magnitude.”

From Obama’s visit to Goree Island in 2013, nothing has been forthcoming other than a presidential statement than it was a “powerful moment.” In more ways than one, in visiting Africa, Obama walked in the shadows of his presidential predecessors who in any case have done much more for Africa.  Was the black world justified in expecting more from one of their own?

During his first US presidential campaign, Barack Obama was asked for his thoughts on the issue of Black reparations. To him, the best that America could do to compensate its African-American citizens was to provide better inner city schools.  This answer was a coded response that black Americans’ socio-economic ‘advancement’ had to be individually earned. Presumably, African-Americans should not rock the boat delving into slavery; they should let bygones be bygones.

That was a rehearsed political response for a racially-mixed American audience. It was also an early warning that Obama considered himself a typical American without attachments and special obligations to any segments of the society. Neither Global Africans nor Africans-Americans had a claim on him as US president.  He steadfastly adhered to that doctrine for his entire first term.

Now Obama is half a year into his second term.  Yet, we still do not know for sure, his stand on the question of reparations for Black Americans, a claim made against staggering historical abuse especially relative to slavery. Yet, in this broad sense, reparations are indeed relevant in the American experience.

Obama is known to cite Dr. Martin Luther King’s statement that “the arc of history is long, but it bends towards justice.” Presumably, in situations where a definable group has absorbed ‘collective injury’ from another, historical wisdom has been to amend the wrongs by paying restitution. The first step in this ‘arc of history’ is to acknowledge wrongdoing; to issue an apology.

The most famous case is, of course, that of the Jews in the holocaust. Post-World War II Germany has paid dearly to the Jewish people and the state of Israel.

Another case was that of Japanese wrongful relocation and internment by the Roosevelt administration during World War II.  In December 1941, the Japanese attacked Pearl Harbor. US citizens feared another attack and pressured President Franklin Roosevelt to take pre-emptive action against Japanese descendants on the US West Coast.

In February 1942, Roosevelt signed an Executive Order under which 120, 000 people of Japanese descent living along the US Pacific coast were removed from their homes and placed in War Relocation Camps. Presumably, people of Japanese extraction were prone to act as spies for Japan. Yet, during the entire war only ten people were ever convicted of spying for Japan, and these were all Caucasians.

Forty three years after World War II, the US Government succumbed to domestic pressure and agreed to pay restitutions in the amount of $1.2 billion to the affected Japanese families. That 1988 American decision was accompanied by a moving pledge: “The internment of Americans of Japanese ancestry was a great injustice, and it will never be repeated.”

Ten years after the American commendable decision, in February 2008, the Government of Australia extended full and unreserved apology to its Aborigine citizens for inflicting “profound grief, suffering and loss on these our fellow Australians.” That government did not mention reparations by name, but amends for that purpose have been forthcoming albeit slowly.

It is common knowledge that Blacks in Global Africa, particularly USA, have endured greater ‘collective injury’ than all the other groups combined. Yet, no reparations have ever been paid to them. Legal experts say that the default is due to the enormity of the issue; it is too overwhelming.

Even if he could, President Barack Obama is not obliged to rescue Africa; Americans voted him to power and he is answerable to them. However, slavery ultimately became mostly an American sin.  More than other American presidents, Obama has an obligation as an African-American government official to apologize to fellow African-Americans for that wrongdoing. As a venue, Goree Island was a golden opportunity missed. 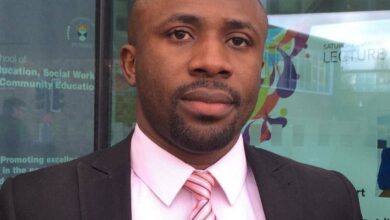