-Musings on the Chaotic State of Cameroon Football. 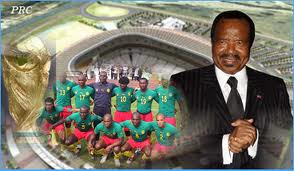 One of those moments when Cameroonians are most lucid about the myriad of problems plaguing the country is when the national football team is humbled by a defeat. Frustration becomes even more when the defeat is at the hands of countries of low football pedigree like Cape Verde and most recently Togo. It comes as no surprise then that shortly after the lions were walloped two nil in Lome,Togo, reports surfaced that armed security forces were deployed to protect the office of the Cameroon Football Federation-FECAFOOT.  In every game, there are losers and winners. No one team wins all the time, so why should there be the fear that Cameroonians may vent their anger somewhere? The stock of football and the lions as political cover for the CPDM government has fallen to lowest levels. Looking at the way football is managed and the way things have been shaping up in the country, should the defeat from Togo be a surprise?

After the 1990 world cup when the Indomitable Lions became the first African side to reach the Quarter Finals of the World Cup, out spoken goalkeeper Bell Joseph Antoine said what football had done in one major tournament to market Cameroon, diplomacy had failed to do in thirty years. He was right but how well has the country use the incredible resource that its football is? Besides President Biya and his government using football as political cover to shield failed policies, it has been a galore of incredible mismanagement. About five world cup participations, four nations cup victories, and the country of global legends like Roger Milla,Thomas Nkono, Patrick Mboma and Samuel Eto’o is unable to boast of a stadium which conforms to international norms. 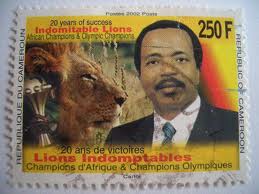 Most recently, Fecafoot and the Ministry of Sports have engaged in a cat and mouse game which could only result in the kind of defeat that the star studded lions suffered in Togo. A local coach in Jean Paul Akono who was not producing the worse of results was unceremoniously booted out  in favor of a German Coach. No offence to the talents and merits of the current coach Finke, but what was the raison d’etre of sacking Akono? The man proposed a salary of circa $15.ooo.ooo, which is peanuts compared to what foreigner coaches less competent than him earn when they head the lions. Akono had taken the lions to the top of their group in the world cup qualifiers. He was based in Cameroon, so what was the reason for his sack? Foreign coaches tend to be interviewed in specific countries looking for coaches, in the case of Cameroon, a delegation had to be sent to Paris to audition potential coaches.

Not long ago elections for the Fecafoot President were postponed by the Prime Minister for security reasons. The government has clearly indicated that it does not want current President Iya Mohammed to continue. No doubt Iya is unpopular, no doubt Cameroon football will be better off with more fresh and visionary leadership instead of the team in place that seems to focus more on sharing the spoils of the game without investment. But how can a coherent case be built against Iya when the actors are so divided? How can icons like Milla,Bell,Mve, and others be on a different side and others like Kaham on the other side? And how comes it is only now that the regime is trying to build a case of corruption against Iya from the public company that he runs? The whole thing has been nothing but a show of shame. Why mix up efforts to bar him from running Fecafoot with corruption charges only at this point in time?Elections for the executive bureau of the Littoral Region taking place in the Center Region? It is pathetic and the irony is that the fight is less about football and more about the spoils.

Come to think of it, members of Fecafoot are all members of the ruling party and have in the past engaged in active political campaigns. How comes people who run the local football league earn wages which are about five times the average that players who are the key actors earn? With such cacophony, it is a miracle that the lions have produced the results that have made Cameroon world famous in football. Credit for this reputation goes not to the authorities but to the raw talent of its youth. Youth whose talent and character is forged in very difficult circumstances, disgraceful infrastructure, inadequate material, miserable wages etc.

Back to political cover, in 1992, with the opposition poised to dislodge him from power, President Biya cashed in on the popularity of the national team by using the logo of the lions for is campaign. Many may have forgotten but cash strapped ahead of the 1994 world cup, the government embarked on a nationwide fund raising campaign dubbed “operation coup de Coeur,” and Cameroonians were most magnanimous in their generosity . The money never got to the players and the most plausible answer given by a Minister of Communications at the time was that the money disappeared between Paris and New York.  Of all the months of the year, President picked the month of June in 2002 when the lions were participating at the world cup in Korea and Japan for crucial parliamentary and local government elections. The reason for the choice was obvious to many.

Nothing has brought more joy and united Cameroonians more than football and the regime and its Fecafoot have done little to grow the game or sustain positive results. It remains the same problem of coaches, unpaid bonuses or bonuses not paid on time, the Sports Ministry and the Federation permanently at daggers drawn because of the spoils. 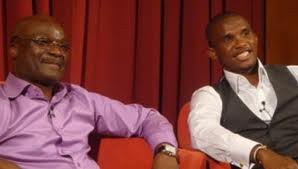 If football is not working then what else is going to work? When the lions are unable to put a smile on the faces of Cameroonians and portray that semblance of national unity what else will, perhaps with the exception of political fatigue ? The lions have missed two nations cup in a row, had a dismal performance at the first world cup on African soil and run the risk of missing out on the 2015 world cup. Not an eventuality to pray for, but the CPDM government ought to know the more victories and exploits from the lions become scarce, the more Cameroonians become conscious of the fact that there things going profoundly wrong in the country.

Leave football to actors in the game and things will be better, when the tide is so strong against Iya as it is now, he should put country first and step down, why should Cameroon soccer continue to be toyed with by unscrupulous folks and politicians? Which world class league or club have Cameroonians not played for? Barcelone, Real Madrid, Inter Milan, Chelsea, Liverpool, Ajax, Marseille, Manchester United, etc, Cameroonians have played there. How comes the opportunity cannot be given to talented folks like Mboma, Song, Bell, Tataw,etc to shape policy? In Zambia, Kalusha Bwalya is President of the football federation. In Nigeria Stephen Keshi is coach and has already won a nations cup. Cameroonian footballers past and present need to take charge for the game to evolve positively.