“There is nothing exclusive in the term unity; unity for Nigeria holds out the best chance for progress when that unity is a unity of purpose rather than the present hollow approach to unity for sake of unity. For unity to be meaningful, it has to be creative, not the unity of Jonah in the whale but the unity of holy matrimony. The first can only lead to defecation, the second to procreation”. – Chukwuemeka Odumegwu Ojukwu.

I have just finished work on a new book titled Nigeria is Negotiable. Its release is scheduled to coincide with the 20th anniversary of the June 12, 1993, presidential election won by Chief Moshood Abiola. Many of us know how that experiment under the gap-toothed dictator, Gen. Ibrahim Babangida, ended. But that is a topic for another essay.

It is the title of the book that is of interest here. I chose the title deliberately, to stir debate; but it is also a reaffirmation of my conviction about where our dear country is headed and what needs to be done. At no time since I became politically conscious more than three decades ago have I been as worried as I am today about Project Nigeria.

What is worrying is not so much the demands of various groups who seek to tear the country apart, but the hypocrisy and half-hearted response of those who are in a position to save the looming calamity. That we are still debating whether there is a nation, almost 100 years after the country was created and 53 years of political independence is emblematic of a country mired in deep crisis.

I take that back. There is really no debate about the future of our country. What we have are platitudes, threats and a presupposition that one way or another, things will work out. If we had any meaningful debate, perhaps we would have come to the inevitable conclusion that there is so much wrong with Nigeria and that if we do not deal with the cancer of disunity, it will metastasize and consume the country.
President Jonathan, like all rulers before him, has had occasions to talk about the vexed issue of national unity, the most recent being in September 2012 during the national summit and rally for peace, unity and development, organised by the Nigeria Labour Congress (NLC).
“I agree with other speakers that we cannot talk about cannibalising and balkanising Nigeria,” the president said. “I think those who are thinking that way want to be kings in tiny islands, because I believe from the little I know that Nigeria is still rated as a country to look at globally. It’s not because we produce oil and some people think it’s because of our oil. One small country with less than 10 million population produces more oil than Nigeria. So it is not the oil, it is not the vast land. What is the land space of Nigeria compared to Sudan? So any person who feels that they just want to stay as one nation, just want to be king without hard work. They will not get it, because Nigeria will not divide’’.

How many times have we heard the glib talk “Nigeria will not divide” or “the unity of the country is nonnegotiable”? Of course, if it were as simple as the president imagined, we would not spend valuable time and space on the issue. It seems people talk about the unity of Nigeria the way it suits them. For many, it is the unity of Jonah in the belly of the whale.
It is our inability to confront this unhealthy unity that is our greatest undoing. There is something troubling about the structure of Nigeria which explains why we cannot achieve much no matter how hard we try to “move the country forward”, to use the weasel words of our politicians.
While not excusing corruption and the perfidy of the ruling class, we can conveniently argue that the monumental corruption going on in the country, the violation of human rights, the contempt for rule of law and widespread injustice are all tied inexorably to the structure of the country. So we need to go back to basics. In a sentence, we need to negotiate Nigeria. This has become imperative in the light of the “clear and present danger”.
Every day, we hear war drums, threats and counter threats. A few days ago, leader of the Niger Delta Peoples Volunteer Force, Alhaji Mujaheed Dokubo-Asari, while reacting to the faceoff between President Jonathan and Governor Rotimi Amaechi of Rivers State vowed that, “There will be no peace, not only in the Niger Delta, but everywhere, if Goodluck Jonathan is not the president by 2015, except God takes his life, which we do not pray for”.
“Jonathan has uninterrupted eight years of two terms to be president, according to the Nigeria constitution,” Dokubo-Asari added. “We must have our uninterrupted eight years of two tenures. I am not in support of any amendment to the constitution that will reduce the eight years”.
If this is not a declaration of war against the Nigerian state, I do not know what is. But that is the nature of our democracy. Our votes do not count; they have never counted. I do not know which constitution Dokubo-Asari is referring to, but the 1999 constitution which President Jonathan swore to uphold does not guarantee an automatic “uninterrupted eight years of two tenures” for any Nigerian no matter where they come from.
We used to talk about the hegemony of the three dominant ethnic groups in the country. That is no longer the case. If you thought Dokubo-Asari was merely being mischievous, perhaps you missed the memo by the Special Adviser to the President on Niger Delta, and chairman, presidential amnesty programme, Kingsley Kuku, who last week warned of “dire consequences in the Niger Delta if President Jonathan is not re-elected”.
Speaking at a session with officials of the U.S. State Department led by the Deputy Assistant Secretary of State (Bureau of African Affairs), Donald Teitelbaum, Kuku was reported to have said, “Only Mr. Jonathan can guarantee peace in the restive region and hence, the compelling need to persuade him to seek re-election in 2015”.
“However if we allow anything to hurt the peace in the Niger Delta, Nigeria’s economy will be endangered and energy security in Nigeria and even America will not be guaranteed. The attention and interest of the U.S. in Nigeria must remain the stability of the Niger Delta and the easiest way to ensure this is to encourage President Jonathan to complete an eight-year term,” Kuku said.
What kind of president instigates war against his own people? It is only a president that does not have faith in the country he governs. Of course, if we uphold the right of one group to wage war against the state, we cannot, for any reason, deny same to other groups. That is why the planned trial of members of the Movement for the Actualisation of the Sovereign State of Biafra (MASSOB) for treason must be resisted.

We may dismiss Dokubo-Asari, but it is difficult to fault his assertion that “The 2015 general elections would ‘define and decide’ the existence of Nigeria”. That much was confirmed by the statement credited to Farouk Adamu Aliyu a former member of the House of Representatives and the 2011 Congress for Progressive Change, (CPC) governorship candidate in Jigawa State who warned a few days ago that, “It is either a Northerner as president in 2015 or there will be no more Nigeria”. 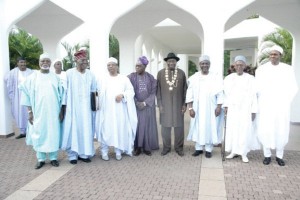 Before now, we heard from people who promised to make Nigeria “ungovernable” if President Jonathan won the 2011 election. Clearly, our problem as a nation is much graver than we are willing to admit.
Rather than worrying about reelection in 2015, President Jonathan can etch his name in history and save Nigeria by facilitating a process for “we the people” to have a meaningful debate about the future of Nigeria.

The president seems fortunate to be in charge when the country celebrates 100 years of amalgamation. What an auspicious moment to negotiate Nigeria. Forget corruption, forget electricity, forget infrastructure. You need to have a nation for these things to work.

I hope it is not asking for too much!

South Africa's Desmond Tutu: 'I will not vote for ANC'