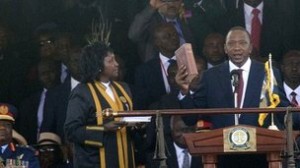 Uhuru Kenyatta has been sworn in as Kenya’s new president, following his victory in March against Raila Odinga.

Dignitaries and tens of thousands of people witnessed the inauguration at a stadium in the capital, Nairobi.Mr Odinga did not attend the ceremony after his attempt to overturn Mr Kenyatta’s victory in court failed.Mr Kenyatta and his deputy, William Ruto, face charges at the International Criminal Court relating to post-election violence five years ago.

They were on opposite sides at the time and both deny the accusations.Sudanese President Omar al-Bashir, who faces an ICC arrest warrant over the conflict in Darfur, was not in Nairobi for the inauguration.Mr Kenyatta is the son of Kenya’s founding father, Jomo Kenyatta, and is heir to one of the largest fortunes in Kenya.

He served as deputy prime minister, minister for trade, and finance minister under outgoing President Mwai Kibaki.The crowd, waving Kenyan flags, burst into rapturous welcome as the 51 year old took the oath of office, becoming Kenya’s youngest president.In his inaugural address, Mr Kenyatta said he would govern for all Kenyans.“We will leave no community behind… Where there’s disillusionment, we’ll restore hope,” he said.The new government would abolish maternity fees in its first 100 days and children starting school next year would be given laptops, he added.

In an apparent reference to the ICC case against him, he said: “I assure you again that under my leadership, Kenya will strive to uphold our international obligations, so long as these are founded on the well-established principles of mutual respect and reciprocity.”US and European diplomats attended the inauguration, despite warning before the election that they would have limited contact with Mr Kenyatta if he is voted into office.

Among the African leaders present for the inauguration were South Africa’s Jacob Zuma, Nigeria’s Goodluck Jonathan and Uganda’s Yoweri Museveni. Mr Museveni told the cheering crowd that he wanted to applaud Kenyans for rejecting the “blackmail” of the ICC.He supported the ICC when it was formed, but it was now being used by “arrogant actors” who were trying to “install leaders of their choice in Africa and eliminate those they don’t like”, he said.

Mr Odinga – the outgoing prime minister – did not attend the ceremony, choosing to be on holiday in South Africa instead.Other senior members of his Coalition for Reforms and Democracy (Cord) party have also stayed away to signal their opposition to Mr Kenyatta’s presidency, correspondents say.

According to official results, Mr Kenyatta beat Mr Odinga by 50.07% to 43.28% in March, avoiding a run-off by just 8,100 votes.Mr Odinga challenged the result, but said he would respect the Kenyan Supreme Court’s ruling in Mr Kenyatta’s favour.The election was Kenya’s first after a disputed poll in 2007, which led to violence that left more than 1,200 people dead.

Mr Kenyatta is due to appear at the ICC for his trial in The Hague later this year, accused of crimes against humanity. He denies the charges.

Kenya is a party to the Rome Statute, the treaty which established the ICC in 2002.But like most African countries, it has refused to enforce the ICC warrant for Mr Bashir’s arrest.Earlier, Kenyan government spokesman Muthui Kariuki told the BBC that Mr Bashir had been invited and would not be arrested if he accepted the invitation.After Mr Bashir visited Kenya in 2010, a Kenyan court ruled that the government must arrest him if he returned, in line with its international obligations under the Rome Statute.The government is appealing against the ruling.