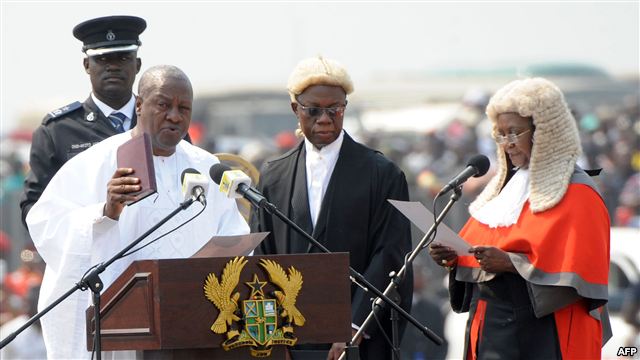 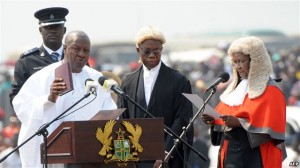 Mahama took the oath of office before regional heads of state, dignitaries and tens of thousands of citizens Monday, promising he would not let his country down.

“There is a torch that is passed from one era of Ghanaians to the next. It is fragile and as irreplaceable as any family treasure,” he said. “Ladies and gentlemen, that torch is now in our possession …It is doing our best that we can make Ghana its best… I will do my best, I will give of my best and I will ensure that my actions make a positive difference in the lives of Ghanaians.”

Mahama’s election victory is being contested by the opposition New Patriotic Party, but Accra’s streets remained peaceful and thousands of Mahama supporters cheered and beat drums in support of their president.

“We know that we’ve won the elections, 100 percent, and we know we are happy,” he said. ” We want to come and celebrate it so that the whole Ghana, the whole world will know that surely we love the guy too much because he is a youth.”

The 54-year-old Mr. Mahama first took office in July following the death of former President John Atta Mills. He won the December 7 poll with an absolute majority of 50.7 percent, beating his main challenger, Nana Akufo-Addo, by three percent, according to the electoral commission.

The new president has promised to continue the initiatives of his predecessor to bring better infrastructure, schools and hospitals to the people of Ghana.

Ghana has one of the fastest growing economies on the continent, driven in part by new revenue from vast oil reserves that were discovered off Ghana’s shores in 2007. Oil production began in 2010 and now tops more than 80,000 barrels per day.

The country has also been hailed as a model of democracy in the region. Yet even here, democratic institutions are being tested.

The inaugural ceremony was boycotted by the New Patriotic Party, which says the electoral commission counted invalid votes. International observers said the election was free and fair.

However, the party says their candidate, Akufo-Addo, was the real winner, and the party filed a petition in the Supreme Court late last month.

“Once you attend then as it were, it would be an endorsement to the declaration by the Electoral Commission and that is why we have decided not to go. And the court matter, we believe, is a more civilized method than resorting to bows and arrows and guns and machetes as is happening in some African states,” he said. “We believe in the role of law, let’s due process resolve the case that we’ve taken to the Supreme Court.”

Analysts say a decision by the court will take at least several weeks.