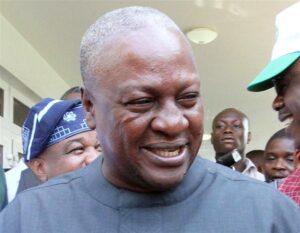 Ghana’s ruling party the National Democratic Congress will serve another 48 months in office, the country’s Electoral Commissioner has declared. The incumbent John Mahama polled 50.70 percent of the total votes cast in Friday and Saturday’s polls, to beat off competition from his main challenger and leader of the opposition New Patriotic Party Nana Addo Dankwa Akuffo-Addo, who managed some 47.74 percent. In a closely fought two-way race that went down to the wire, Ghana once again put its best foot forward as one of Africa’s most shining democracies, attracting commendation from various observer groups including the African Union.

Last night, shortly after the results were declared, there were widespread celebrations among supporters of the ruling party. Shaped by long brass band processions across some principal streets in and outside the national capital Accra, and tooting of car and motor cycle horns among other forms of celebrations, the supporters made the most of their candidate’s victory. Last weekend’s elections were Ghana’s sixth since the country chose multi-party democracy in 1992, after years of military subjugation and authoritarianism. Since 1992, the country has survived some six other elections including last weekend’s. And when they decided to put it to test once more, it was business as usual, as the Ghanaian people managed to uphold the good name of their country.

This year’s elections were significant in so many ways. After years of voting manually, the country decided to go electronic, adopting the biometric system. It however took the Ghanaian people some three days to know who their next leader was, as challenges with that system of voting, were overwhelming. Away from the challenges of faulty biometric machines, and delay in getting election materials to polling stations, the elections were generally conducted in a peaceful manner. However, despite the general feeling of content among supporters of the ruling party, the country appears divided over choice of leader, as the opposition New Patriotic Party has virtually punched holes into the election results, raising legitimate issues and doubting whether the will of the Ghanaian people haven’t been subverted. Few hours into the EC’s declaration of the ruling party as winners, the opposition party held a press conference to as it were, raise concerns over what they observed, was a systematic fraud pattern aimed at getting the ruling party to win at all cost.

“We noticed a pattern of fraud where substantial numbers of votes are either added to the NDC candidate or subtracted from the (votes of the) NPP candidate at collation centres,” Jake Obestebi Lamptey, Chairman of the opposition NPP told local media. Giving a set of examples to back their claim, the NPP argued that “the proper conduct and declaration of results of a credible process is the surest way to promote the peace and stability of our democratic nation”. The NPP’s claims were sharply rebutted by the ruling party. The Electoral Commission has also said the NPP’s claim came rather too late, adding that the party couldn’t back their claims with “adequate evidence”.

But soon after the declaration, the party gave the strongest of indications that they were still not convinced that the elections were free, fair and credible. “It is obvious from the preponderance of evidence available to us, some of which was made available to the Commissioner prior to this evening’s declaration, that the ruling National Democratic Congress, led by President John Mahama, conspired with certain EC officials in constituencies across the country to falsify the election results in favour of the President of the Republic, thereby, disregarding the mandate of the people of Ghana,” the NPP’s General Secretary Kwadwo Owusu Afriyie said in a statement.

“To accept this result is to discredit democracy in Ghana and, in the process, distort the process of democratization in Africa. Therefore, the New Patriotic Party cannot accept the results of the presidential election as declared by the EC…” The National Chairman of the Party has accordingly convened an emergency meeting of the National Executive Committee of the NPP on Tuesday December 11 to lay out the steps that the party will take in light of these events”. 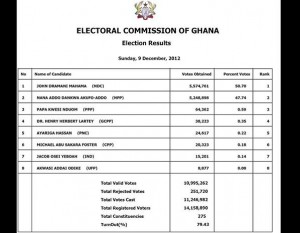 So, how will a Mahama-led government look? The next few days should be interesting, as Mahama seeks to heal the wounds of a country politically polarized over his choice as leader. He has the arduous task of winning over the confidence of the opposition, and the broader Ghanaian public, as he begins his first full term as president. Mahama, who has been filling the gap of head of state after the country lost its former president John Mills, has the next 48 months to impress or fail. With the debate over how to spend Ghana’s expected oil revenue (a key stream) still hanging, a Mahama-led government would have to work hard to impress.

In a country where access to portable water, land, and infrastructure is still a challenge, as well as cost of living generally and stubbornly high, it remains to be seen if his government would do any better in addressing them. Cost of education, which was a major campaign tool during these elections, is still very high, and must be addressed over the next four years. While the majority of the Ghanaian people who voted for Mahama are optimistic he would deliver, a greater percentage (including those who didn’t vote for him), would obviously cast doubts over his ability to take them to the Promised Land.

As he prepares to swear in on January 7, 2013, so many things including who forms the next government, should be on Mahama’s mind. Depending on who gets to be part of his government, Mahama may end up as the best or worse leader Ghana has ever produced.
Quite apart from the tough call of putting together a solid team that should expectedly get the job done, a Mahama-led government has to do more in the fight against corruption. With corruption still high in the country, particularly in government sectors; Mahama has to do more than his predecessors did, in ensuring that the purse of the Ghanaian people isn’t pillaged. The level of sluggishness, sloppiness, and culture of impunity and indispensability that was witnessed during the first four years of the NDC, must be checked if he is to be a successful president.

Energy: A total of 725 African students have already signed up for the Go Green in the City global business case challenge