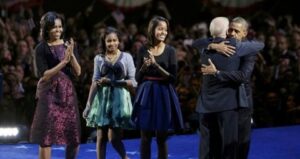 And he did it. The man whose name has become synonymous with the slogan “Yes we can” has clinched a second term in office as President of theUnited States of Americaafter he was re-elected on his promise of moving the country “Forward”.

A candidate needed to secure 270 electoral college votes to win the presidential bid. President Barack Obama was re-elected with 303 electoral college votes, with his Republican challenger – Mitt Romney – trailing by a difference of nearly 100, in the most expensive election campaign to date. Over $2bn was spent by the two sides.

Despite the wide margin, Obama’s Democratic Party could not muster enough votes to grasp the much needed control of the 435 seat House of Representatives and analysts say the president’s second term is likely to be marked by the same bottlenecks with the Republicans blocking legislation. The Democrats however retained control of the 100-member Senate.

In his acceptance speech, an elated Obama reached out to the Republicans to work together to haul America out of its deficit. In words echoing Romney’s concession speech, which highlighted disapproval of “partisan bickering”, Obama urged the American people to put aside partisan politics to deal with the sluggish economy. Obama said he “is more determined and more inspired than ever about the work there is to do”.

But questions are being asked what Obama’s new term means forAfrica. Previously, Obama has made one whistle stop tour to Sub-Saharan Africa, and the continent expects more from the only US president they consider one of their own.

For many, however, the US election presents an example forAfrica, lessons that can be drawn from a peaceful election where the losing candidate is magnanimous in defeat.

Guinea turns to Gemalto to modernize its national voter register