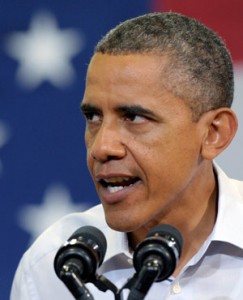 Africa’s response to Obama’s election in November 2008 was nothing short of ecstatic. A Nigerian foreign minister wept, Nelson Mandela hailed it as proof that people should “dare to dream”, and Kenya declared a national holiday.

The fawning was quickly reciprocated, with Obama visiting Ghana just five months after his inauguration.

“I have the blood of Africa within me,” he emotively told the Ghanaian parliament and rapt television viewers across the continent. Africa, the new president declared, was now “a fundamental part of our interconnected world”.

But as America’s Great Recession deepened, wars in Iraq and Afghanistan trundled on and the Arab Spring exploded, sub-Saharan Africa found itself in a familiar spot; on the back-burner.

“There was an expectation that he was going to be the US President for Africa,” said long-time South African diplomat Thomas Wheeler, now of the South African Institute of International Affairs. “It was just an unrealistic expectation.”

“The fact that he had an African father did not mean that he was going to devote a lot more time to Africa.”

Symbolically, Obama’s visit to Ghana was to be his only trip to the region. Equally symbolically, it took until June this year for his White House to come up with a nine-page “US strategy toward sub-Saharan Africa”.

Yet the continent was far from ignored.

Air Force One has been conspicuous in its absence, but the US Air Force and other branches of the US security services have not.

“Obama to my mind is more engaged in Africa, but the nature of how the United States is engaging has changed. It is mostly security related,” said Jason Warner, a Harvard-based expert on African security.

According to Warner, Obama has helped “normalise” Africa policy. “There is no other region in the world that the US engages on simply humanitarian grounds.”

Since Obama took office it has been widely reported that the administration has expanded a network of air bases across Africa, training its might on al-Qaeda affiliated militants and other groups.

Clandestine bases in Burkina Faso, Mauritania and Uganda are said to have been used variously to spy on al-Qaeda in the Islamic Maghreb and track elements of the Lord’s Resistance Army, led by Joseph Kony.

Unconfirmed US drone strikes are reported with some frequency in Somalia.

According to the London-based Bureau of Investigative Journalism, between 58 and 170 people have been killed in 10 to 23 strikes on Somalia, although some took place during George W Bush’s administration.

“The nature of what he is doing is definitely more covert. But you do get these glimpses every few months that the US is really deeply embedded in Africa,” said Warner.

A year ago Obama deployed 100 US special forces to help Ugandan troops scour thick African jungles of the Central African Republic for Kony – an indicted war criminal – backed up by surveillance planes.

The linchpin for this newly securitised policy toward Africa is the United States Africa Command, or Africom, which operates as a nerve centre for US military operations and military-to-military contacts in the region.

The command became operational barely one month before Obama was elected and now boasts 2 000 designated staff. By one count that is more Africa staff than the foreign aid department USAid.

But much like Obama’s security policy in Africa, Africom has remained largely low-key. It is based in Stuttgart, Germany, rather than in the region, in part to allay accusations of neo-colonial ambitions.

Officials are keen to talk up military training programmes and not so willing to discuss covert operations.

That lack of bombast has been welcomed by many on the continent.

According to Chidi Odinkalu, head of Nigeria’s National Human Rights Commission and a respected activist, Obama’s policy toward one crisis – Nigeria’s Boko Haram Islamist insurgency – has struck a balance.

“It would’ve been easy to overreach… and take Nigeria into the realm of the global war on terror. But I think the US has recognised the particularities of the situation.”

Still, there is little doubt that Obama has missed an opportunity to create goodwill through more high-profile appearances in African capitals, but according to John Campbell, a former US ambassador to Nigeria, the impact of the loss is limited.

“I don’t doubt that for many people on the street it is somehow or other disappointing,” he said. “But you keep looking for concrete examples of where it has damaged relations, and I don’t really see any.”

Regardless of the perceived neglect, Obama’s power to grasp the African imagination remains undimmed, according to Nigerian rights activist Odinkalu.

“I think the success of the Obama presidency goes beyond whatever he’s done for Africa.”