JOHANNESBURG— South Africa’s president says the nation is doing well despite having one of the world’s largest income gaps and after suffering a series of violent, illegal strikes. Jacob Zuma says positive developments are slowly improving the plight of millions of impoverished South Africans and says he is optimistic about the nation’s future.

Zuma emanated confidence Monday as he spoke of his nation’s progress despite major setbacks — including months of violent, illegal strikes.

A major ruling party conference takes place later this year, and Zuma is busy campaigning to hold on to his seat. Whoever is chosen in December to lead the African National Congress will be heir apparent to the presidency in the 2014 election.

Zuma touted developments almost across the board.

“Over the past 18 years, we have consolidated democracy and have built strong state institutions in the executive, judiciary and the legislature to take forward the transformation,” Zuma said. “We have extended water, electricity, sanitation, roads, health care and other services to millions who did not have access to these services before.”

He also touted what is one of the bigger successes of his presidency: his administration’s broad and far-reaching campaign against HIV. That science-based policy is a complete reversal of former President Thabo Mbeki’s approach. A health minister under Mbeki advocated that AIDS patients take garlic and beetroot instead of antiretroviral drugs.

But Zuma lamented the recent violent strikes as a major setback. In August, miners at the Lonmin platinum mine in Marikana launched a wildcat strike that left at least 46 people dead. In the main incident of violence, police shot dead 34 protesting miners. Police say they fired in self-defense. Zuma has ordered an investigation.

President Zuma said the events were a shock, but will not shake the nation’s foundation.

“South   Africa is not at a tipping point. I think that’s a total misunderstanding of where South Africa is. I think South Africa is on the move, moving forward,” Zuma said. “We have had particularly the mishap of Marikana. Marikana has been a mishap and everybody has accepted that reality. It was a shock, it was a surprise to everyone, we did not expect that to happen.”

Zuma also believes his own tenure is not at a tipping point, despite a hefty share of personal and political setbacks and increasing political competition.

In previous years he has been tried, separately, for rape and corruption. He was acquitted of rape and the corruption charges were dropped.

But the shadow of corruption allegations has never really faded. Local media have reported a recent dustup over his alleged plan to use $24 million (250 million rand) in taxpayer funds to upgrade his rural mansion. He could face an official investigation into the affair.

He has also been plagued by highly publicized legal battles over artistic satire using his image to convey messages about government corruption, leading to questions about freedom of expression under his ANC leadership.

As of Monday, the president formally dropped a $600,000 (5-million rand) lawsuit against a political cartoonist known as Zapiro for a 2008 cartoon depicting Zuma preparing to rape Lady Justice.

Cartoonist Jonathan Shapiro responded to the case’s end with — naturally — a cartoon. The caption reads, “Are we done here?”

That’s a question many of Zuma’s critics are also surely asking as the ANC political conference looms. 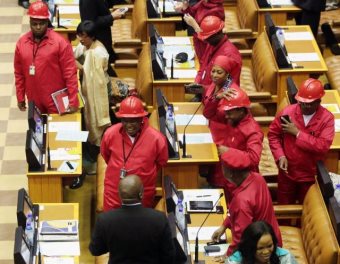