By Patrick Smith in Addis Ababa *

By Patrick Smith in Addis Ababa *

A South African takes the helm at the continental organisation amidst at least four African crises that will test new chair  Nkosazana Dlamini-Zuma’s diplomatic and political skills.

It was 1am on 17 July when a respectful hush fell over the silvery spaceship-­shaped conference centre in Addis Ababa. Nkosazana Dlamini-Zuma, resplendent in a green and purple boubou, swore her loyalty to the African Union (AU) as the first woman to lead the continent’s top organisation. “I pledge not to seek instructions,” she intoned, “from any member state nor from any authority external to the African Union.”

It is one of those diplomatic fictions that when candidates for top international positions are elected, they instantly forget their nationalist aspirations. It was a fiction most energetically pushed by the South African government. Its lobbyists had worked hard to distance Dlamini-Zuma from her country’s diplomatic record. “I’m not here to represent South African policy,” she told journalists shortly before voting started for the AU job on 15 July.

Until then, five states – Algeria, Egypt, Libya, Nigeria and South Africa – had respected the unwritten rule that they would not run for the AU’s top position. But after a year of growing South African frustration with its handling of international interventions in Côte d’Ivoire and Libya, President Jacob Zuma’s allies launched a bid for the top job late last year. The campaign stuttered and faltered. Government insiders feared a resounding diplomatic rebuff.

At the January summit, AU chairman Jean Ping won each of three rounds of voting but failed to win the two-thirds of member states’ votes necessary for victory. A stalemate ensued as criticism of South Africa’s grandiose ambitions grew. Big countries such as Nigeria, Egypt and Libya objected to South Africa’s pretensions of continental leadership.  They may be too late. South Africa is already Africa’s representative in the emerging economies club known as BRICS – Brazil, Russia, India, China and South Africa. It is the only African member of the G-20 grouping of major world economies. It hosts the Pan-African Parliament, which is taken seriously as representing the continent’s political zeitgeist. Just as South Africa’s seat on the United Nations (UN) Security Council expires at the end of this year, its former foreign minister takes over as head of the AU.

South Africa has become the key point of diplomatic and economic contact in Africa for other emerging regions, as well as for the United States and the European Union. Should the efforts to reform the outdated power structures of the UN ever succeed, then South Africa is in pole position for the long-requested permanent African seat on the Security Council.

There are plenty of clichés about an Anglophone-Francophone split in the AU, but they do not stack up. In the final round of voting, Dlamini-Zuma won the votes of 37 out of 51 voting states. Several Francophone states including Senegal, Chad and the Democratic Republic of Congo were among them. A frustrated Ivorian diplomat explained how the “fickleness” of his counterparts in Central Africa was responsible for Ping’s defeat.

Some of Dlamini-Zuma’s staunchest opponents – Côte d’Ivoire and Gabon – are Francophone. But they worked with large non-Francophone countries: Nigeria, Ethiopia and Kenya. Most of the Arabic-speaking states of North Africa also backed Ping, at least initially.  Voting split in different ways: regionally, linguistically, ideologically and on gender. A diplomat contrasted the speeches of Ping and Zuma at the closing ceremony.

Dlamini-Zuma quoted Marcus Garvey: “The history of a movement, of a nation, of a race, is a guide-post of that movement’s destiny, that nation’s destiny, that race’s destiny. What you do today that is worthwhile, inspires others to act.”

Ping quoted Shakespeare: “All the world’s a stage and all the men and women merely players; They have their exits and their entrances…” With a rueful smile, Ping … 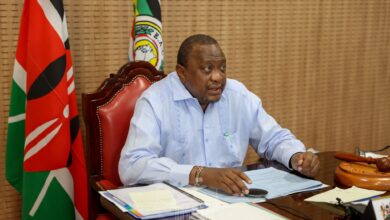 Kenyatta presides over Summit of EAC Heads of State