Five years after discovery of a major offshore oilfield, people in Ghana are still banking on better times ahead. But foreign companies — notably those from China — are also poised to cash in. A visit to rapidly expanding city of Sekondi-Takoradi, at the center of it all.

SEKONDI-TAKORADI – The route to the training center is a crumbling asphalt road losing its battle with encroaching vegetation. The guards sitting in a wooden hut to our right barely look up as we drive past. Ebow Haizel-Ferguson is the director of the training center where we are heading; officially called “Sigma Base Technical Services,” it is Ghana’s largest “oil school.”

Steering the car to the left and through the thicket, a view suddenly opens up on to a railway graveyard. Haizel-Ferguson says proudly: “You’d be surprised what we’ve achieved out of nothing.”

Rust is eating its way through scrapped cars surrounding a large hangar. Through the dusty windows of the building, alignments of long work-tables can be seen. This is where in recent months Haizel-Ferguson and his team have taught 2,000 young people welding, pipefitting and other skills — but not for the rail sector: they’re only renting the premises in the Ghanaian coastal city Sekondi-Takoradi from the train company.

Since the 2007 discovery of the Jubilee offshore oilfield — one of the largest oil deposits ever found in Africa — only one thing has mattered in Ghana: black gold. For the country’s people it means the hope of better economic times. Investments in oil-drilling infrastructure have boosted growth by over 13%. And the rapidly expanding city of Sekondi-Takoradi is at the center of it all.

So is Haizel-Ferguson, who worked at Nigeria’s oil metropolis Port Harcourt for 22 years. The tall Ghanaian entrepreneur says he knows everything there is to know about oil: “I’ve breathed it, drunk it, and puked it.”

But Nigeria’s path is unfortunately one that Ghana is in danger of following. After decades of pollution by oil companies, oil thieves, and rebels, the Niger Delta is one of those places on the planet that look as if it’s straight from of an apocalyptic science fiction set. And while western oil companies lure employees to Nigeria with the highest bonuses in the world — a senior manager can earn 320,000 euros a year — Nigerian government figures say local firms account for only 18% of the value-creation process.

Very few Nigerians benefit from the commodity, and the oil boom has cost countless fishermen and farmers their livelihood. It is only in the last few years that laws relevant to granting supplier contracts have been tightened with the intent that two-thirds of them will go to Nigerian companies.

What happened in a country only some 100 km away is a cautionary tale — and Haizel-Ferguson wants to make sure the story doesn’t repeat itself in Ghana.

Expectations here are high indeed. Although so far the oilfields have produced less than expected, the Ghana Oil and Gas Service Providers Association (GOGSPA) says that the industry could create 100,000 jobs for Ghanaians. Two years ago, the Ministry of Energy promised a more cautious 10,000 new jobs — and in early June 2012 announced that only 813 jobs have opened up so far. Meanwhile, as oil infrastructure is being built up, Ghanaian companies complain about how few of the contracts they obtain.

Others are benefitting instead. China, for example, which gave Ghana a 2.4 billion euro loan to construct oil infrastructure, is being paid back with 13,000 barrels per day. That’s a cheap price for the Asians who have also stipulated that a significant number of contracts be awarded to Chinese companies.

What clearly has little bearing is that five years ago the Ghanaian government drafted laws stipulating that companies like Tullow Oil (USA) and Kosmos Energy (Great Britain) had to award 90% of contracts to local firms. In any case, these laws have yet to come into force.

But all of this has not dimmed the hopes of many Ghanaians for well-paid jobs. And it’s why Haizel-Ferguson is schooling young men and women in oil industry skills at the old railway training center. “They are now qualified to apply for jobs. Bear in mind that the construction of oil industry infrastructure will be going on for another 20 years at least,” he says. “But so far they’ve not been giving the work to Ghanaians.”

If it is the largest, Haizel-Ferguson’s “Oil and Gas Skills Training Workshop” is by no means the only oil industry training center in Ghana. On the streets of Sekondi-Takoradi you see hundreds of posters advertising such institutes. All of them promise that a certificate from their school guarantees a job in the industry.

The offer is seductive to many. It didn’t take long to persuade Emmanuel Opoku-Agyeman, for example, who quit his job in the marketing department of a newspaper to pursue training. “It isn’t just Ghana that’s got oil, they’re discovering new fields all over Africa,” says the 31-year-old. “With a certificate, you can apply for jobs anywhere.”

Opoku-Agyeman earned 500 Ghana Cedi — about 200 euros — a month at his old job. In Takoradi, the “oil schools” hand out documents stating that the minimum monthly salary for a job on an oil rig is the equivalent of 2,800 euros – 14 times what Opoku-Agyeman was making. With prospects like that, it didn’t seem to him that what the Harvard Marine Petroleum Training Institute (HMPTI) was asking for a three-month course — $3000 (2,394 euros) — was excessive.

On the job market

The HMPTI’s Australian investors have made over an old office building where experienced oil industry engineers give the courses. Proudly, Opoku-Agyeman takes me on a tour of the premises and tells me about the packed days of learning, the great equipment the facility offers, the competent teachers. As one of the first 200 graduates, he’s now on the job market. He says he’s only going to start getting nervous if he hasn’t found something within the next few months — and he shouldn’t even be thinking that way, he says, there are no grounds for it, he has received excellent training “as you would expect from a Harvard school.”

No, there is no connection to Harvard University in the United States, school director Ron McGrath concedes. “The important thing is that we are qualifying young Ghanaians to work in the oil sector,” he says. The focus is not on the jobs requiring very high-level qualifications, but on occupations on the supplier side: “Future international regulations will require workers in the sector to have attended courses such as ours.”

McGrath doesn’t believe Ghanaian black gold expectations are too high, nor is the price charged by his institution. “Training in this field just is expensive, you need a lot of equipment and the teachers have to have top qualifications.”

Along with the government, schools like the HMPTI urge people to be patient. Coming up for reelection in December, President John Atta Mills has promised that oil revenues will be used to build up the infrastructure of the entire nation. And all you need to do is travel through Ghana for a few days to see the huge expectations such promises unleash in a country that is still one of the world’s poorest.

Five hours away from Sekondi-Takoradi is the village of Awukuguanyensi. Most of its population of 130 work as farmers. As you enter the village you pass a wooden sign that reads: “No electricity, no votes.” It’s a pretty empty threat, born of desperation — one way or the other, the village is likely to have to wait a long time for power lines to be put in.

On the day of my visit, the children of Awukuguanyensi are being vaccinated against Pneumococci and rotavirus for free. In Ghana, these two fatal diseases account for 20% of child mortality. Thanks to the GAVI Alliance’s mission to provide free vaccines to children in developing countries, 87% of the children in this area have been vaccinated — although overall the situation in the country is far away indeed from one of the major UN Millennium Development Goals, which is to reduce, by 2015, child mortality by two-thirds from what it was in 1990.

In this village, many families have lost a child to illness brought on by the miserable living conditions. And those who do make it past childhood face bleak perspectives. Isaac Kwasi, 25, says all he ever wanted was to be a farmer, but you can’t make a living from it. So many of his friends have moved to Sekondi-Takoradi. He sometimes gets text messages from them saying they still don’t have full-time jobs. But that’s not holding him back. Next year, he says, he’s moving too — to Takoradi, and its promise of black gold.

Read the original article in German.

Black Gold in the Congo: Threat to Stability or Development Opportunity?

Incensed by Fallacies and Fabrications, Jean Ping will fight for African Union Office till The End 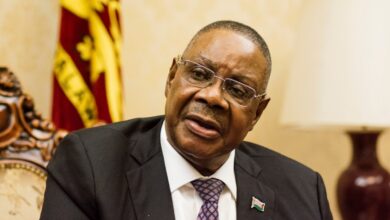