Two years ago, on a tragic weekend in Cabinda, northern Angola, Togolese striker Emmanuel Sheyi Adebayor, together with other members of their national football team suffered an attack from unknown assailants on their way to the Angolan capital, Luanda.

The team was among 15 others who were to compete for honours at the 27th edition of the African Cup of Nations. The attack claimed the life of one member of the team and left several others injured and traumatized. The team had to exit the tournament and headed for the Togolese capital, Lome, to mourn their departed colleague.

In what saw an unpleasant back and forth disagreement between Togolese football officials and the governing body CAF on how genuine Togo’s exit had to be taken, the team made all the headlines for very repugnant reasons.

One person, who stood out in the whole controversy, and refusing to budge to CAF’s dictates was captain of the team Emmanuel Sheyi Adebayor. The 28 year old, then playing professional football for English Premiership side Manchester City, won for the team a lot of sympathy as he went on a free for all bashing of the governing body.

At a point, he described CAF as “an inhuman institution made up of self seeking individuals”. Those sentiments of his, was that of many on the continent who felt CAF was being overly naïve about the depth of grief the team, and as a matter of fact the whole continent was going through.

It’s been several months after that incident happened and the Togolese national team has since moved on. Although memories of Cabinda are still fresh in their minds, they’ve found a good reason to shake off the sad incident. The team is currently engaged in qualifiers for the 28th edition of the competition.

But for Adebayor, memories of the sad incident and the seemingly “unstable” and sometimes messy and unpredictable terrain in Togo have kept him away. Neighbouring Ghana, which lies on the West of Togo, has been the beneficiary of this football star.

In the plush and Ghana’s foremost up-market residential Trassaco Valley in Accra, sits a stunning edifice owned by the lanky football star. Trassaco Valley houses only the rich and affluent in the Ghanaian society and is also home to some of Ghana’s top A-List football celebrities. Recently, pictures of Adebayor’s long fleet of cars, and a huge residential property which he owns in the Ghanaian capital, Accra, has generated a lot of interest.

“I love Ghana. I feel very much at ease when I am here. That is not to say I don’t love my home country Togo. There is time for everything. At the moment, this is where I have decided to stay. We are all one people so it doesn’t really matter where you stay. It is the impact you can make on the people around you that matters.

“Ghana happens to be that one place where I connect with” he told me in a recent interview for the Africawatch Magazine.

“I have done a lot in Togo and this is known to all. Together with other friends of mine, I have helped communities such as Kpalime, Sokode and Aneho, with educational infrastructure for the youth and also provided the needed medical supplies to the community dispensary.  So something, and a lot, is being done”.

Adebayor’s explanation of how dear Ghana is to his heart is traced to his early years as a young adult. Stories are told of how he spent part of his formative years in Ghana before finding enough reason to pledge allegiance to Togo.

These days, he’s been making the headlines for all the right reasons. In recent times, and coming before the launch of his Sheyi Emmanuel Adebayor Foundation (SEA), the lanky footballer has spent most of his vacatiosn doing charity work. He’s commissioned borehole projects in the Togolese twin town of Hamile and Koro in Lambussie-Karni district in the Upper West Region, in the northern part of Ghana.

At a grand durbar of chiefs in Hamile in Wa, the Togolese star said: “I just couldn’t believe it when I heard that the people here have to travel long distances just to get water. I

have been in similar situation and I know how it feels like so it fills me with joy to see that I am able to bring some relief to these people. I am glad that from henceforth, you will no longer have to trek for long hours in search of water. We believed from the beginning that it can be done and today, we have done that”.

He was also part of another charity event where he joined other Africa and World football stars including Chelsea star Ashley Cole, to play a peace match in Accra organized by Ghana midfielder Michael Essien.

However, it’s not all about charity, long and solemn speeches and travelling distances and hours to touch the hearts of the destitute and poor in the African society. Once a while and when on vacation in Ghana, he makes the most of his time by throwing parties for some of Ghana and Togo’s A-List celebrities and football colleagues. So pomp are these parties that almost everybody in the “who is who” list in Ghana find their way there.

For many of Africa’s youth, personalities like Adebayor provide a lot of inspiration and hope for a bright and promising future that can only get better with time. He is surely a template and perfect case study that will continue to be of use to a continent that owes its young people so much.

Fatou Bensouda And The Top ICC Post:Africa’s Woman at The Hague 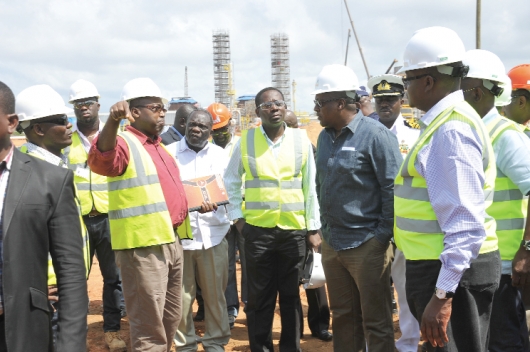 Ghana Gas production to start May 2014