Competition over UN, AU jobs and economic rivalries are escalating tension between the powerhouses of Africa’s north and south, writes Charles Molele.

The diplomatic sabres have been rattled; the political fangs have been bared: the tensions between Africa’s powerhouse of the north, Nigeria, and its counterpart in the south, South Africa, have been escalating.

The main reasons are efforts by Abuja to obtain a permanent seat on the United Nations Security Council and membership of the G20 group of advanced and industrialised economies. On the other hand, there are perceptions that Pretoria wants to occupy every powerful position in multilateral institutions.

the powerful position of the African Union (AU) Commission chairperson, according to a senior government diplomat who spoke on condition of anonymity.

Several South African diplomats and the ministers of foreign affairs in the Southern African Development Community (SADC) are lobbying hard for Dlamini-Zuma to be elected during a re-run of the race slated for July in Lilongwe, Malawi.
But some of the diplomats, who were not mandated to talk to the press, said that Nigeria could spoil the party for South Africa.

They said Nigeria, the largest oil-producing country in Africa, was expected to support Ping, a former Gabonese foreign minister.

Deteriorated
Earlier this year, Dlamini-Zuma stood against Ping, but neither garnered the required majority to be elected.

Nigeria’s new administration under President Goodluck Jonathan has also been championing efforts to surpass the size of the South African economy and join the world’s 20 largest economies by 2020. South Africa is the only African member of the G20, and this does not sit well with the Nigerians.

Like Nigeria, South Africa also wants a permanent seat on the Security Council.

In recent months, Nigerians have been complaining about South Africa dominating aspects of their economy, especially in telecommunications. Recently, a South African company opened high-profile shopping centres in Nigeria and several South African banks are eyeing opportunities there.

Immigration
According to a South African diplomat in the department of international relations and co-operation, Nigeria also hates the fact that many economically depressed African countries rush to South Africa whenever they need aid and donations, something that Nigeria cannot afford to provide. In the past two months, South Africa has given millions of dollars in aid and donations to Somalia ($100-million), Malawi ($35-million) and to drought-stricken countries in the Sahel region, such as Mauritania, Mali, Burkina Faso, Niger and  Chad (a total of $100-million).

Immigration remains another source of tension between the two countries. The recent deportation of 125 Nigerians for not producing yellow fever vaccination certificates has made matters worse.

Said a South African diplomat: “The tension between the two countries is mainly about who is the most powerful on the continent economically, politically, even militarily.

“They [Nigerians] want to spite us because we have been getting senior positions and membership in multilateral institutions such as the Brics [Brazil, Russia, India, China, South Africa], Ibsa [India, Brazil, South Africa], the G20, the Non-Aligned Movement and the United Nations Security Council. Nigeria doesn’t like this. Nigeria also wanted to occupy these positions, but they do not have a stable democracy like ours, their economy is not as diverse as ours, and their financial institutions are not as highly rated as ours. Nigeria does not like this.

“Corruption is rampant in their country and terrorism is out of control. The tensions between Muslims and Christians are making it difficult for anyone to operate or conduct business there.”

Slightly fragile
Political analyst Zamikhaya Maseti said the relationship between the two countries had always been slightly fragile but remained cordial during the era of former presidents Thabo Mbeki and Olusegun Obasanjo.But, Maseti said, the Jonathan administration had repositioned the country as an economic powerhouse capable of playing a dominant role in African affairs.

“I support calls in diplomatic circles that South Africa should withdraw from this AU race because it is causing more harm than unity among African countries,” said Maseti.

He added that the “mis-articulation” of the African agenda under President Jacob Zuma had also caused tension between South Africa and Nigeria and many other African countries.

No-fly zone
“Many African countries will never forgive us for backing the Security Council resolution which called for a no-fly zone in Libya. That resolution will forever remain a black spot; every bomb that landed in Libya, killing dozens of women and children, did so with our blessing in the eyes of Africa. How do we expect them to trust us now?”

But a senior diplomat in the depart­ment dismissed suggestions that South Africa should withdraw from the AU race because of deepening divisions on the continent, and also said South Africa should not have to carry the blame for the UN resolution on Libya – it was an AU decision, and Nigeria and Gabon also voted for it.

“We are not going to withdraw,” the diplomat said. “The region [SADC] has no appetite to withdraw. They believe it’s their time and this is in keeping with the rotational principle of the AU.

“South Africa was approached by SADC to lead the AU Commission and they identified Dlamini-Zuma and we agreed.

Unresponsive
“What everybody complained about was that the AU is weak; it is unresponsive to Africa’s problems; it takes time to act; and it’s unable to counter Western hegemony.”

Claude Kabemba, political analyst and an authority on Africa, said Nigeria was comfortable with Ping because he was from a small country and could be dictated to.

“If you have South Africa in the AU Commission, Nigeria is not going to do as it likes because South Africa is an influential country and Africa’s economic powerhouse,” said Kabemba. “That is why they are comfortable with Gabon or small countries in the position.

“It’s all about power relations between two powerful states on the continent. It’s also about who controls what and who is seen as leading the continent.”

Last week, the SADC extraordinary summit held in Luanda reaffirmed its support for Dlamini-Zuma and said: “There was a need to strengthen the AU in order to better position the continental body for the multitude of opportunities and challenges facing Africa.”

Victory for gender equality
In early May, the Pan African Business Forum, an umbrella body with a membership of 350 influential business people and professionals, also endorsed Dlamini-Zuma’s candidature at a press conference in Accra, Ghana.

The forum said her win would be a victory for gender equality and would give the continent a new impetus for economic development – it would be an important player in world affairs. “Dlamini-Zuma fits the bill perfectly for this all-important continental position,” the forum’s president, Prince Prosper Ladislas Agbesi, told the Ghanaian media.

“What is needed now is an AU chairperson who can not only serve as effective mediator and consensus builder among member states on a variety of issues but also serve to cut through the many vested interests, and point the continent in the right direction when making decisions in all those issues.

“This is where Dlamini-Zuma can be effective for the benefit of the AU continental body and, indeed, for the continent as a whole.”

Department of international relations spokesperson, Clayson Monyela, said: “Relations between South Africa and Nigeria are strong and cordial, both political and economic. In fact, the leadership of the Nigerian ruling party at the highest level is in South Africa this weekend to interact with our country’s leadership with a view to further consolidate the strong ties.”

Approached for comment, the Nigerian ambassador to South Africa, Sonni Yusuf, referred to a media statement he released after reports suggested that Nigeria would back Dlamini-Zuma for the AU post, in which he denied the suggestions.

The reports were based on ambiguous remarks made last month by Nigerian Vice-President Namadi Sambo after a meeting of the Nigeria-South Africa Binational Commission in Cape Town. He reportedly said that Nigeria would support South Africa for positions at multilateral institutions from time to time, whenever the need arose.

How We Can Ensure the Safety of Our Health Workers

Coronavirus – South Africa: Health Worker Safety is of Paramount Importance to the Department of Health 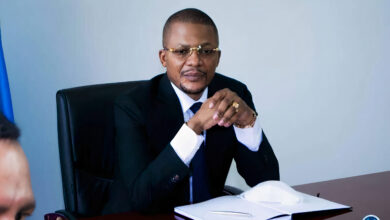