A week hardly goes-by without one or more international investors announcingmajor investment interests in Nairobi, or other African capital cities.

Nokia, Nestle, and IBM are some of the companies which intend to position themselves more strongly in (East) Africa. True, their investments may still be low by international standards, but they are increasingly becoming noticeable.

On a macroeconomic level, the new Africa momentum has also been evident. Africa has weathered both the global financial crisis, and the turbulence in the Euro zone. According to World Bank’s latest economic outlook, Sub-Saharan Africa is projected to grow above 5 percent in 2012 and 2013. This would be higher than the average of developing countries (excluding China), and substantially, above growth in high-income countries. This means that at some point in this decade, Africa could grow above the levels of Asia.  A few years ago, it would not have been possible for economic observers to consider such a scenario.  Once Africa becomes the fastest growing continent in the world; this will also be the true turning point for Africa’s global perception.

There are five reasons why Africa can become an emerging region over the next decade, and Kenya provides a good illustration of this. The first reason is external, while the others are domestic.

First, Asia is growing richer and is becoming more expensive. With an aging and more affluent population, Asia, especially China, will need to expand domestic demand and balance its economy away from exports. This will further raise the costs for production, which will lead to “the end of the China price”, a term used by Pamela Cox, World Bank Vice President for East Asia, at this year’s spring meetings. Other poorer countries can benefit from the end of the China price, mainly due to the fact that more than 85 million manufacturing jobs are expected to leave China in the coming decade. Will Africa get a big share it? Will Kenya be part of it?

Second, Africa will be the new demographic powerhouse of the world. All continents will grow older, and many economies will have a shrinking working population. Africa on the other hand is still young (as a matter of fact, it is also growing older, but from a very low base), and the working age population is rapidly expanding. As family sizes shrink and populations grow older, countries will experience a “demographic dividend”, which occurs when the working age population exceeds the number of dependants, and continues to broaden.

For example, Kenya adds more than one million people per year to its population, and will reach an estimated 85 million by 2050. However, the number of youth (age 0-14) is expected to increase from 20 to 25 million, while that of adults from 22 million today, to 55 million in 2050. This is why rapid population growth is good for Africa, since fast growth is taking place for fundamentally different reasons, compared to the past; it is because people now live longer—not because they have more children.

Third is the geographic transition which is also connected to demography. Most African cities are still small, but growing rapidly; not least because rapid population growth by definition increases the density of countries. Studies show that doubling city size is associated with a productivity increase of an average of 6 percent.   The key issue will be the management of these growing cities. Today, 30 percent of Kenya’s population lives in cities. But going forward, this share will increase by about one percent per year, over the next several decades, which means that by 2033, half of Kenya’s population will be urban. Geography should also work to Africa’s advantage, because it is not far from key markets. The port of Mombasa is relatively close to India and Europe. In addition, Nairobi has already emerged as the region’s transport and service hub.

Fourth, the expansion in education is paying off. Africans are better educated today than they were twenty years ago. Among the Millennium Development Goals, education is likely to be achieved. Kenya speaks the world’s leading language—English—and the business community largely benefits from a good labor force.  Since the introduction of free primary education, most Kenyan children are now going to school. Most of them know how to read and write, but the quality of education still needs improvement.

Fifth, economic policies have substantially improved. The 1990s was the decade of controversial structural adjustment. When I was traveling through Africa during that period, black markets were everywhere. Today they are exceptional. Compared to Europe, Africa’s macroeconomic policies look excellent!  For example, Kenya’s debt level of around 45 percent of GDP would propel it to one of the top performers in the European Union.

Is this picture of an emerging Kenya and Africa too optimistic? Aren’t the challenges still enormous? Isn’t Africa still embroiled by war, drought, climate change, corruption… you name it? Yes, the challenges remain enormous.  But look back ten to twenty years, and compare it to the present day.  In countries like Kenya, Tanzania, Uganda or Rwanda almost all social and economic indicators are now better than in the 1990s. Even globally, think about it: A few years ago, who would have thought that it would be possible for someone in Kenya to have a face-to-face conversation with someone in another part of the world—for free!  Thanks to modern communication, it is now possible.

There are still many local and global problems which need urgent solutions. Between now and 2050, an additional 2 billion people will join the world population, who can help to solve these problems; of these, every second person will be an African. There will also be 45 million more Kenyans. This new generation will grow up in a new world, and be better equipped to solve future challenges.

*Wolfgang Fengler is the World Bank’s Lead Economist in the Nairobi office of the World Bank where he covers Kenya, Rwanda, Eritrea, and Somalia. This is the second part of a speech given at the Annual Gala of to the Petroleum Institute of East Africa. http://blogs.worldbank.org/africacan/team/wolfgang-fengler 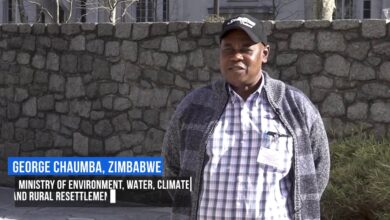 Battling the Coronavirus across Angola