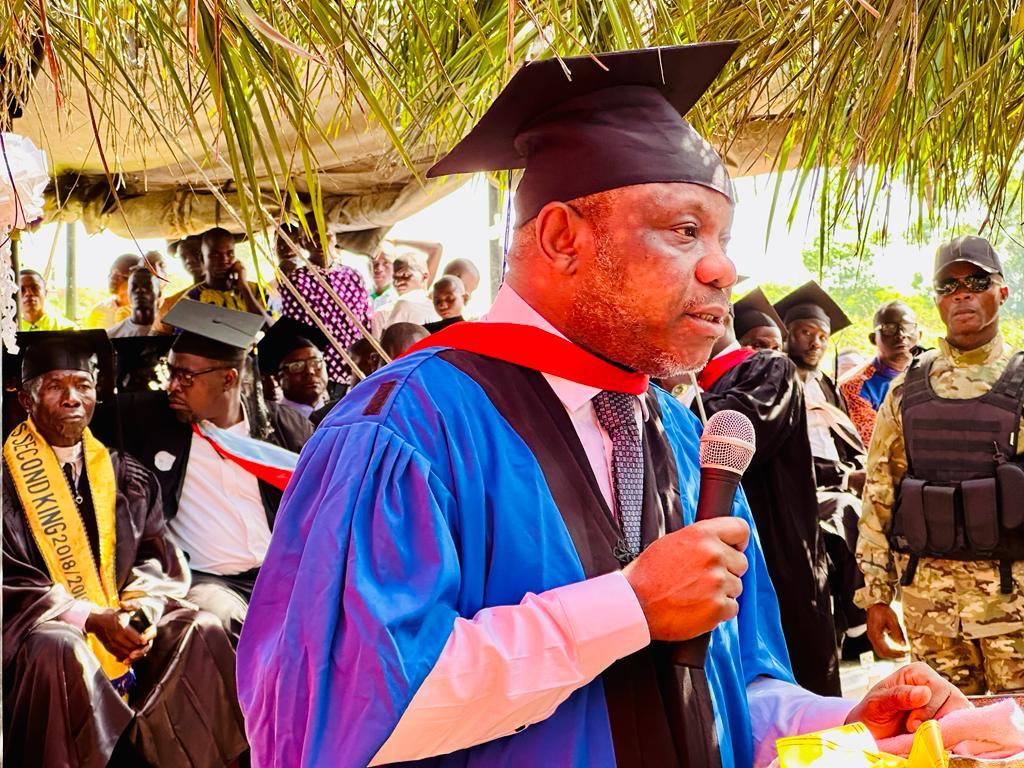 MONROVIA, LIBERIA Nov. 28 – Liberia’s Finance Minister, Samuel D. Tweah Jr. has called on actors in the Liberia educational sector to prioritize the issue of quality as a means of addressing the human capital gap being faced by the country.

Serving as keynote speaker on the 5th Commencement Convocation of the Lofa County Community College (LCCC) in Voinjama, Minister Tweah highlighted that Liberia cannot succeed in building human capital when the requisite value orientation of the society is undermined.

The Liberian Finance Minister defined human capital as a full development of people making available to them the basic tools and possibilities for them to become productive in the society.

Tweah argued that Liberia was in a better human capital position during its pre-war status as compared to the post-war era because of the quality of education that was being provided by actors in the educational sector.

“Before the war, our human capital was challenging as well but in terms of quality we were in a better position. Standards were rigorous before the war; Cuttington University for example was robustly producing the best students that Liberia can boast of today,” Minister Tweah noted.

However, the Minister of Finance lamented that rigorous standards that were set in the past that got the best brains has eroded today, citing that Liberians have to face such a fact as a government, country and society and try to remedial the problem.

The Liberian Financial expert was quick to assure the public of his government’s commitment to addressing the problem of human capacity to attract growth and development in the country.

He unveils that such a quest has over the years been challenged by the competing priorities of the government where they want to pave roads, construct bridges, build more hospitals with the limited resources available.

Minister Tweah disclosed that the current Educational Sector Plan (ESP) of the Government of Liberia will be the game changer for the country in the area of human capital development.

Minister Tweah also emphasized that the ESP which has been endorsed by the President of Liberia will enable the government to use 20 percent of its budget on education as a means of cutting the huge deficit in the area of human capital.

The MFDP top notch said 20 percent of the current budget is equivalent to US$160 million which according to him is to be allotted to the educational sector under the ESP annually with the donor partners providing the remaining 400 million to complete the entire estimated sum needed to transform the educational sector of the country.

Tweah said the World Bank report on Liberia highlighted that the human capital development of Liberia is greatly challenged with an estimation of a billion United States dollars to address such problems.

Against this backdrop, the Government of Liberia developed the ESP as a means of addressing the challenge facing the educational sector.

He said the Government of Liberia under the astute leadership of President Weah has taken the tough decision to make a paradigm shift in the human capital of the country to institute efficiency in the Liberian job market.

The MFDP boss said the decision was tough on grounds that human capital investments are deliverables that can only be realized after ten years as compared to investment in infrastructure which can be seen in three to four years.

Adding: “We have not fixed the Lofa road as a country in over 100 years and we are trying to fix it. Imagine when students don’t go to school for only 10 years in a generation. That generation is lost if we don’t put them in school. But that same generation will not be lost if we don’t build the road”.

Also, the Minister of Finance encouraged the Ministry of Education which is the supervisory arm of the government in the educational sector to prioritize improving the quality of instructors in the various institutions as he pledged his support to the National Commission on Higher Education’s quest to conduct credential audits in institutions of higher learning.

Tweah said the credential audit will allow instructors with the requisite requirements to be in intuitions across the country which will subsequently enable the students to learn from the best.

Minster Tweah encouraged the graduates of the LCCC to exert themselves in their educational sojourn aimed at contributing toward addressing the huge challenge the country faces in the area of human capacity.

He then called on all meaningful Liberians to be a part of the social revolution which according to him is geared toward changing the educational sector of Liberia by making it the best.

Can DLL files be viruses? SRB2 Message Board