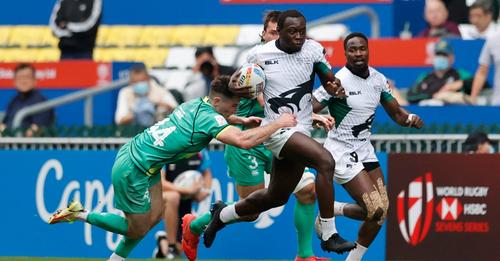 Kenya Sevens, famously known as Shujaa, lost 28-12 to Ireland in the opening round of the Hong Kong Sevens on Friday.

Shujaa got off to a good start, with Billy Odhiambo crossing the whitewash for an unconverted try and a 5-0 lead. However, the lead was short-lived, with the Irish taking a 7-5 lead when Mark Roche converted Niall Comerford’s corner post try.

Later, Irish standout Jordan Conroy capitalized on Shujaa’s error to score at the center, and Roche added the extra points to give his team a 14-5 advantage at the interval.

Odhiambo scored his second try after the break, weaving his way through a static Irish defense, and Tony Omondi converted to pull Shujaa within two points of the Irish at 14-12.

Shujaa now sits third in Group D, one point behind Canada, who were battered 36-0 by Argentina.

Kenya must now defeat Argentina and Canada on Saturday to qualify for the Main Cup knockout stages.