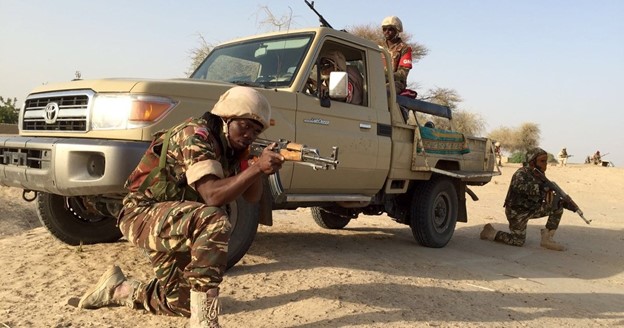 At least 10 Chadian soldiers have been killed in an attack on a military unit in Lake Chad province very close the Nigerian border on Tuesday, Chad’s government has revealed.

The unit had been dispatched as a precursor to building an army post on the island of Bouka-Toullorom, between the villages of Ngouboua and Kaiga, where Boko Haram has carried out several offensives in recent years.

Militants attacked on Tuesday morning, killing up to 10 men with several others injured, the statement said.

The dreaded insurgency, which originally began in northeast Nigeria in 2009, has left more than 350,000 people dead and and has displaced millions of people, forcing them to flee their homes.

The insurgency group has spread their tentacles to the Lake Chad zone in the west of the country, where the chad armies, Niger and Nigeria have been combating the terrorist group for years now.

Despite all plans to defeat them, Boko Haram militants killed 92 Chadian soldiers and wounded 47 more in March 2020.

Chad’s government has plans to double the size of its military by the end of 2022 to overcome security challenges, including threats from Islamist militants linking to al Qaeda and the Islamic State.

Chads army is also fighting armed rebels along its northern border with Libya.

The now military government was formed after the president Idriss Deby was assassinated while he was on a visit to troops fighting Libya-based rebels in April 2021.

His son Mahamat Idriss Deby came to power after his father’s death.