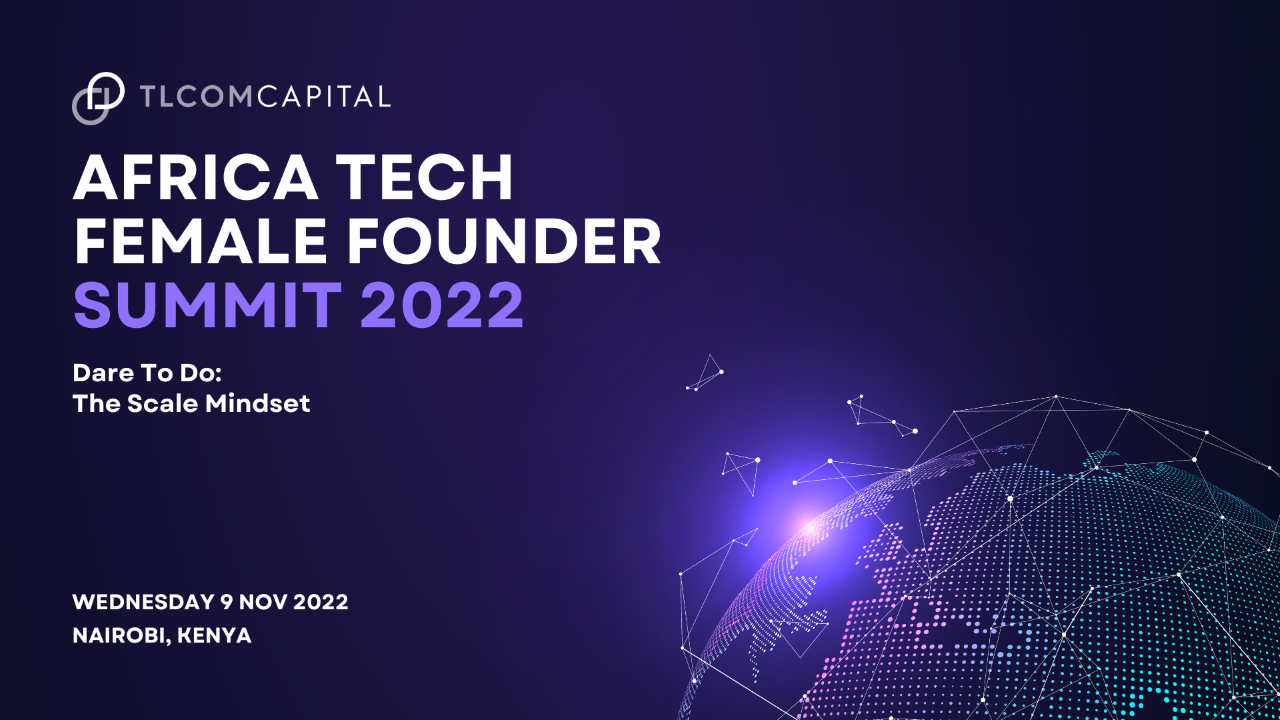 Meg Whitman, US Ambassador to Kenya and Former CEO of eBay & Hewlett-Packard, Confirmed as Headline Speaker.

TLcom Capital, the Africa-focussed venture capital firm, has officially announced the launch of its fourth annual Africa Tech Female Founder Summit, which will be held on Wednesday 9th November 2022 in Nairobi, Kenya. The headline session will feature a fireside chat with Meg Whitman, US Ambassador to Kenya and former CEO of eBay and Hewlett-Packard, who will discuss her global experience scaling technology businesses.

Themed “Dare to Do: The Scale Mindset”, the 2022 Africa Tech Female Founder Summit will deliver expert insights on navigating the journey to scaling tech businesses, strengthening TLcom’s existing work in establishing a vibrant community of female tech founders in Africa who can learn from and support one another. For the event’s keynote address, Odunayo Eweniyi, Co-Founder and COO of Piggyvest, will share her scale journey of building Africa’s largest wealthtech company, which will be followed by a panel discussion on leveraging operations, people and finance to scale sustainably. Rose Goslinga of insurtech leader, Pula, will also deliver a masterclass on OKRs. The Summit will also feature female C-suite executives and founders from Africa’s leading tech companies including Adia Sowho of MTN Nigeria, Radhika Bachu of Ndovu and Tebogo Mokwena of Akiba Digital

With the Summit’s format this year back to in-person, TLcom has now opened up applications for female tech entrepreneurs across Africa and the Diaspora to attend.

Speaking on the event, Omobola Johnson, Senior Partner at TLcom Capital, says, “This year’s Summit will tackle head-on some of the challenges female founders face, while moving the conversation on to actionable strategies for scaling their businesses. The prospect of scaling for women entrepreneurs can often prove daunting due to the obstacles that arise, severely limiting their business growth. We are actively challenging our attendees to be bolder and even more ambitious, in a bid to combat this.”

“Considering the growing number of female-led, tech-enabled businesses on the continent with potential for huge economic upside, it’s time to break this cycle. With the right strategic support, we firmly believe this emerging class of female-run startups can ultimately challenge the status quo in becoming Africa’s next generation of unicorns.”

Over 150 female tech entrepreneurs have attended previous editions of the Summit with last year’s event held virtually, featuring a keynote session from Julia Gillard, former Prime Minister of Australia and Chair of Andela. The 2022 conference will also be complemented by a networking cocktail event with investors, corporates and other tech ecosystem players.

Andreata Muforo, Partner at TLcom Capital, adds “As the Female Founder Summit enters its fourth year, we’ve been privileged to experience the growth of founders within our community and as their companies continue to evolve, it’s vital we rally support to fully leverage this next stage of their journeys.”

“For many of these entrepreneurs, they are entering into a critical growth phase for the first time and our goal is to equip them with a playbook from each other and seasoned business leaders who have travelled this journey before so they can become the next crop of African founders achieving massive value generation for the continent.”

TLcom’s $150mn TIDE Africa Fund II, which is one of the most active funds across Africa, boasts a leadership team which is 60% female following its recent appointment of Eloho Omame as a Partner in June 2022. The firm has actively supported female founders not only through its annual summit, but notably through its track record of investing in some of Africa’s top female-led startups such as Okra and Pula. Earlier this year, TLcom also doubled down on its drive to address the severe funding gap for Africa’s female tech entrepreneurs with a $2mn co-investment commitment to support the launch of FirstCheck Africa’s debut $10mn fund.

Founded in 1999 and with offices in Lagos, Nairobi and London, TLcom has $350mn of VC assets under management across Africa and Europe and in January 2022 announced the first close of its $150mn TIDE Africa Fund II, dedicated to technology and innovation for Africa at all stages of venture capital. The TLcom portfolio includes Twiga Foods, Andela, uLesson, and Kobo360 among others, and it has completed successful Africa VC exits with Upstream acquired by Actis and Movirtu acquired by BlackBerry. TLcom’s fund delivers capital as part of its wider strategic, operational and financial support strategy to entrepreneurs.

What will your cup of coffee look like in 2030?