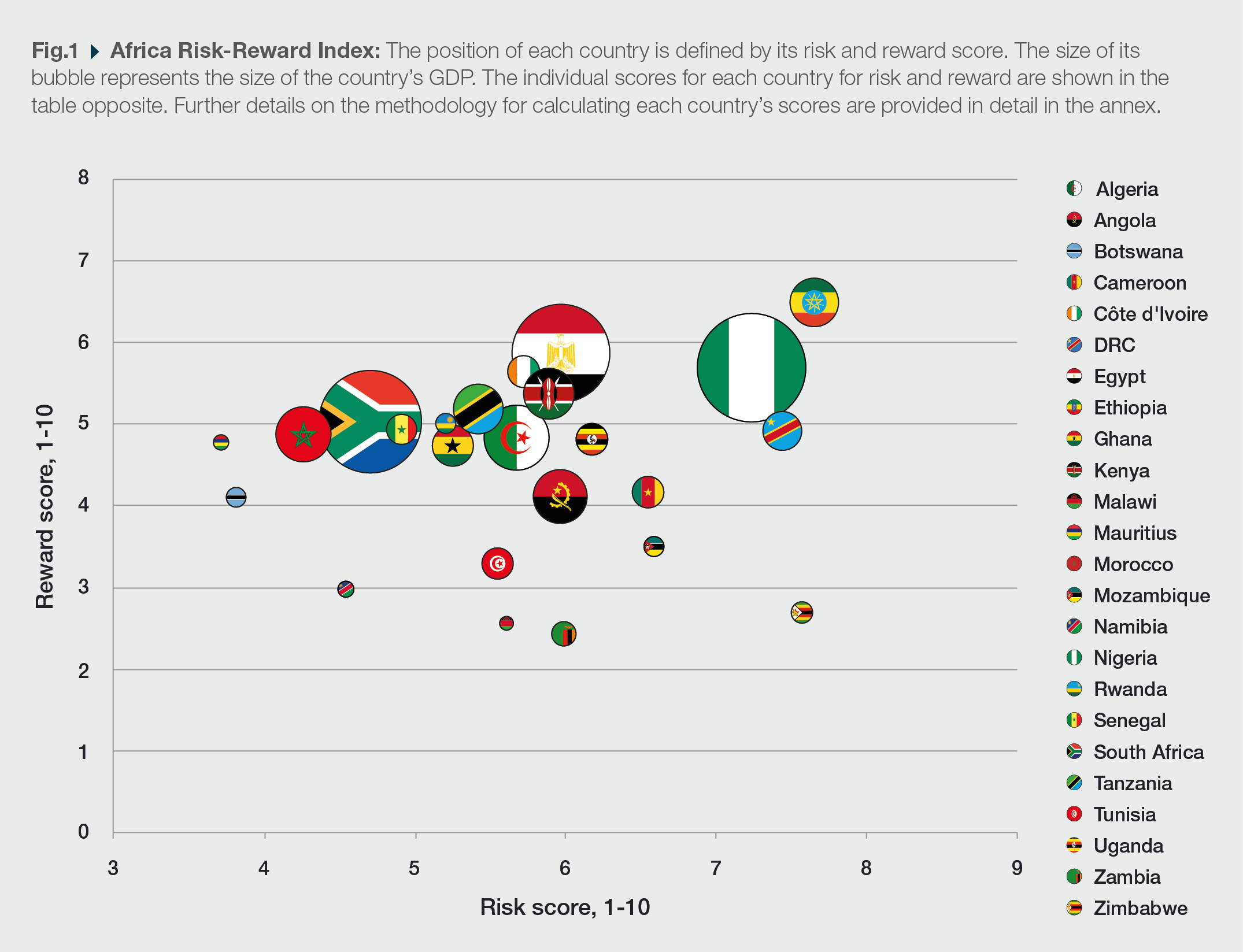 Opportunity through uncertainty: After a stellar GDP growth performance in 2021, Africa finds itself in the midst of remarkable uncertainty. The continent’s response to a fundamental shift in the international food and energy landscape will produce a wide range of investment opportunities.

The Africa Risk-Reward Index is an authoritative guide for policymakers, business leaders, and investors. The report details developments in the investment landscape in major African markets and delivers a grounded, longer-term outlook of key trends shaping investment in these economies.

Africa’s GDP grew by an estimated 6.9% in 2021, revealing positive forward momentum. However, the continent will continue to face uncertainty. The after-effects of the pandemic and the Russia-Ukraine war are projected to impact the African continent’s economic outlook for many years to come. In 2021, about 22 million jobs were lost due to the pandemic, with 30 million people being pushed into extreme poverty. This number is estimated to rise by a further 1.8 million people during 2022. Increased costs, supply chain disruption, and climate change have exacerbated the continent’s food crisis, and across Africa, anti-government sentiment is already high and rising, as governments are seen to be failing to address socio-economic challenges. This year’s risk-reward scores paint a picture of a continent at inflection point, where opportunities abound at a time of high uncertainty.

In the report, we examine three major themes outlined below, summarising our views on Africa’s trajectory.

This article explores how the urgent global transition away from fossil fuels, combined with the disruption to European energy markets, has prompted a renewed focus on energy in Africa – both as a source of energy for other parts of the world and as a continent with the potential to “leapfrog” development through the widespread adoption of clean energy.

There are opportunities across the energy sub-sectors (renewables, oil and gas, hydrogen) and throughout the value chain (extraction, developers, generation, transmission, distribution, export), with governments largely welcoming investors.

“The [energy] transition in Africa needs to be staggered; many countries have and will exploit their fossil fuels while also developing their focus on renewables. Countries with high LNG potential, such as Angola, Mozambique, Tanzania, and Nigeria, will see sustained investor interest, and conversations around ending flaring will be important to watch,” says Patricia Rodrigues, Senior Analyst at Control Risks.

“Private actors will need to be mindful of political risks, given competition for projects in saturated markets, as well as contractual issues with governments, which can lead to delays. Investors should be aware of the environmental, social, and governance (ESG) concerns associated with their industry, given the potential for “greenwashing” and the continued extractive nature of many projects,” says Rodrigues. 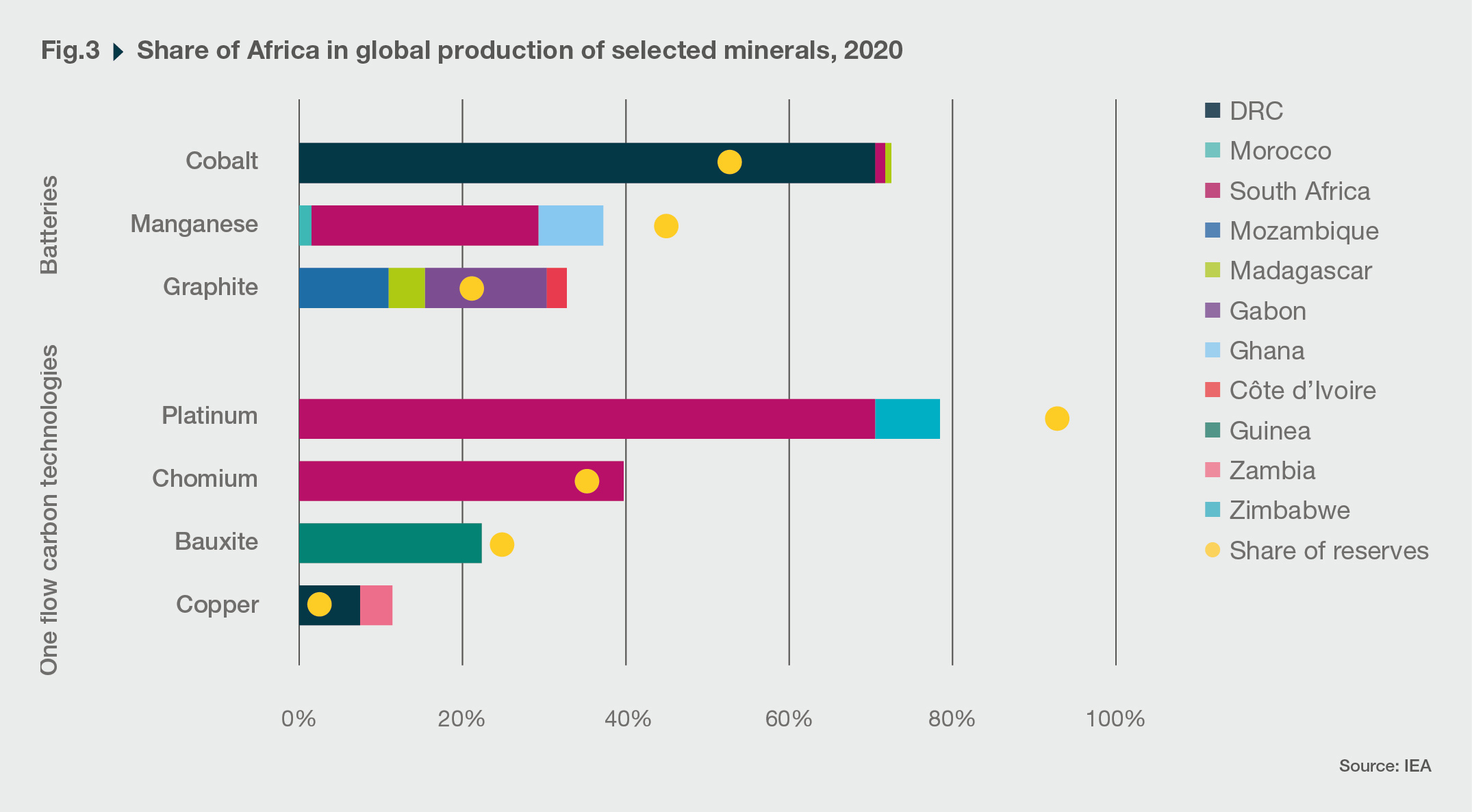 The disruption to global supply chains brought about first by the COVID-19 pandemic and more recently by the conflict in Ukraine have highlighted Africa’s external dependence for most of its commodities and severe gaps in the continent’s internal supply chains, such as food. These challenges are prevalent, despite African countries having committed in 2019 to speed up regional integration under the African Continental Free Trade Agreement (AfCFTA).

Most of Africa’s agriculture-related activity is subsistence, and where it is not, getting food from farm to end-consumer is costly. A large infrastructure deficit in transport and power remains a key obstacle to addressing these challenges.

“Africa’s dependence on imports of even the most basic foodstuffs is one of its most pressing issues”, according to Jacques Nel, head of Africa macro at Oxford Economics Africa. “Given the continent’s dependence on rainfed agriculture and susceptibility to climate change, in the context of an international shift towards shoring-up national food security, the situation could deteriorate further. Addressing this issue will require investment, both public and private, in storage & warehousing, agro-processing, agricultural infrastructure, and financial services. Technological developments in the fintech and agricultural sectors as well as progress on the AfCFTA could catalyze the development needed.”

However, the continent’s policy environment is heavily protectionist, which will prevent improvements in the short term: many of the trade protocols of AfCFTA remain theoretical. Even within individual blocs, such as the East African Community and the Economic Community of West African States, there is competition rather than cooperation to serve primarily non-African markets. Land is also a highly politicised issue across the continent. Meanwhile, the so-called success stories in the agriculture sector also tend to be primarily extractive and focused on low-calorie crops (such as horticulture and cocoa). Questions also remain about value-addition and agri-manufacturing capabilities, which are growing from a very low base across the continent.

Anti-government sentiment is high and rising across many of Africa’s populations, with governments accused of failing to tackle the rising cost of living. Although this has driven unrest in many African capitals, it is unlikely to precipitate significant political change, as elites have either ignored concerns, co-opted popular movements to take power or to strengthen their own hold on authority, or simply do not have the financial capabilities to do anything tangible (with weak or non-existent welfare systems).

Incumbents and elites have made weak promises of reform but are unlikely to follow through despite rising public anger. Examples include Nigeria, Ghana, Uganda, South Africa – the common thread being that opposition in these countries is vocal and disruptive but is mostly ineffective in engendering change.

A string of coups (in Sudan and several West African nations) was conducted on “behalf of the people”, with militaries deposing long-serving leaders and their incumbent parties. However, rather than leading to tangible change, military regimes have reneged or delayed transitions, proving themselves to be just as much a part of the establishment as the leaders they deposed. Elsewhere, in Kenya, presidential frontrunner William Ruto has adopted populist campaigns as part of his bid to differentiate himself from elites. However, he is unlikely to follow through on populist promises, as he is part of the country’s elite.

Political stability risks will be heightened in the coming year as socio-economic challenges exacerbate deep inequalities and highlight governments’ inability to address them. In the year ahead, businesses are likely to be directly or indirectly affected by protests and should plan for risks such as incidental security threats, supply chain delays, looting and vandalism, or duty of care concerns for employees.

The Africa Risk-Reward Index is defined by the combination of risk and reward scores that integrate economic and political risk analysis by Control Risks and Oxford Economics Africa. 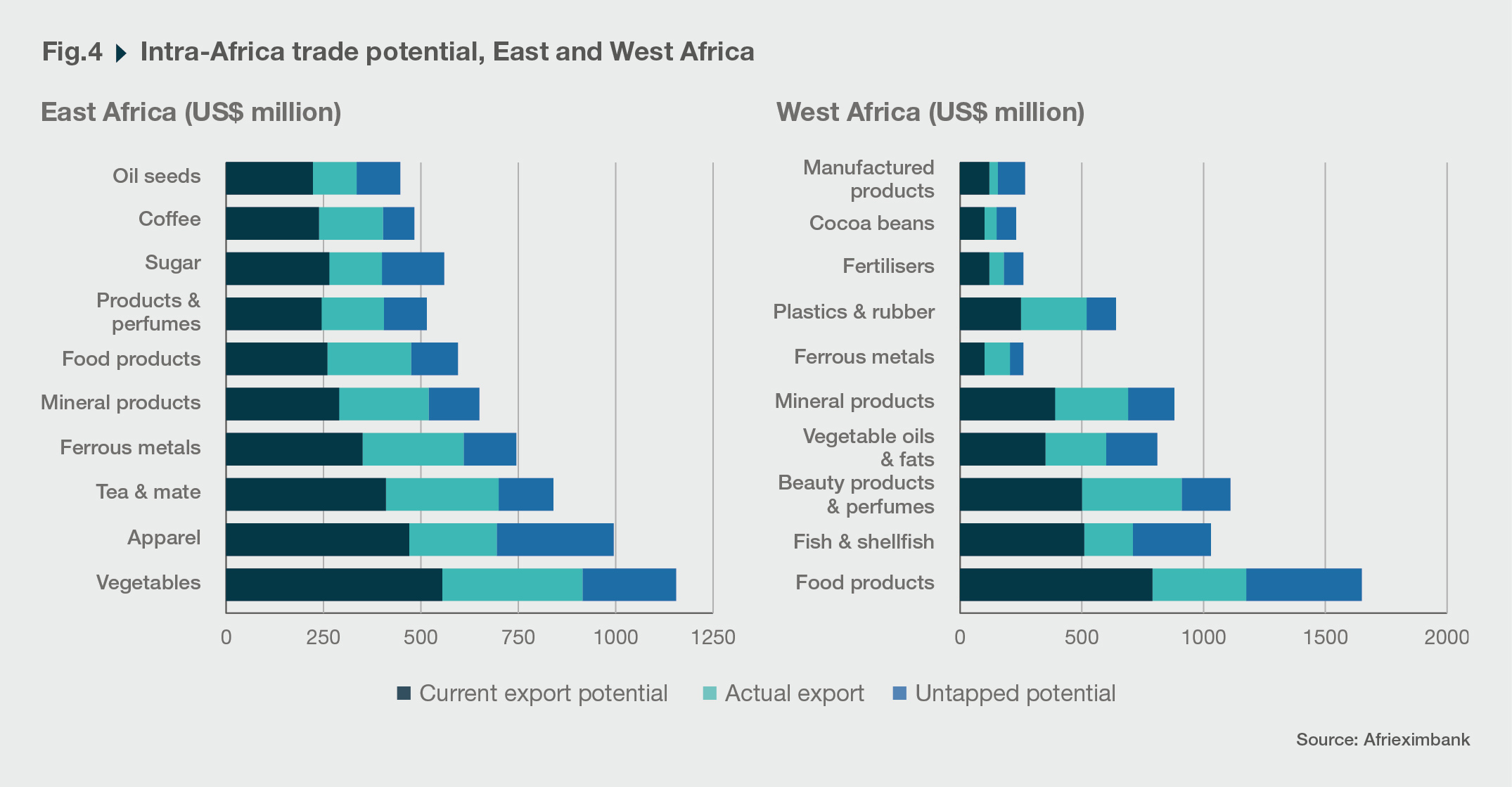 Control Risks is a specialist risk consultancy that helps create secure, compliant, and resilient organisations. We believe that taking risks is essential to success, so we provide the insight and intelligence you need to realise opportunities and grow. From the boardroom to the remotest location, we cut through noise and emotion to give you dependable advice when you need it most. We have been assisting clients in Africa for the past 40 years and today we have eight offices across five countries on the continent, alongside an unrivalled network of embedded consultants and on-the-ground network. We work with the largest investors into Africa and the largest African companies, from mining and energy to media and telecommunications.

Oxford Economics Africa, previously known as NKC African Economics, based in South Africa, has specialised in macroeconomic research in Africa since 2003. Insights are provided within the context of comprehensive knowledge of the African continent, its history, and each country’s unique political and economic setting. In 2015 we became part of the Oxford Economics group, to better combine Oxford Economics’ global base and unparalleled technical expertise in modelling with our Africa-specific skills and insight.

Oxford Economics is a leader in global forecasting and quantitative analysis. Our worldwide client base comprises more than 1,500 international corporations, financial institutions, government organisations, and universities. Headquartered in Oxford, with offices around the world, Oxford Economics employs 450 people, including 300 economists and analysts. The group’s best-of-class global economic and industry models and analytical tools give us an unmatched ability to forecast external market trends and assess their economic, social, and business impact.

About Control Risks and Oxford Economics

Control Risks and Oxford Economics have partnered to provide an innovative political and economic risk forecasting service that takes a holistic view of risk in a complex, rapidly changing, globalised world. Control Risks and Oxford Economics combine extensive geopolitical, operational and security expertise with rigorous economic forecasts and models on 200 countries and 100 industries. Together, we offer full-spectrum consulting that enables your organisation to navigate the world of political and economic risk. Covering all aspects of the investment journey, including security and integrity risk, our joint consultancy practice can overlay geopolitical and economic scenarios to bring new insights and direction to your business. The Struggle for Land and Food in the Locked-down Philippines