For any social and economic development, adequate sanitation, in conjunction with good hygiene and safe water, is essential to good health. Lack of proper sanitation causes diseases and reduces the quality and function of life. The drinking water supply and sanitation sector are one of the key sectors in the country despite the number of challenges it faces, which include limited access to proper sanitation; limited access to safe drinking water in rural and some urban areas; high water losses; and low water pressure. Improper sanitation has become a severe problem, which poses a danger to individuals, families, communities, and the nation at large. Discussed in this article are some of the causes, effects, and solutions to improper sanitation in Ghana.

One of the major causes of poor sanitation is the improper disposal of waste. Solid waste management is nothing to write home about, although involvement of the private sector has brought about some improvement. People dispose of waste materials indiscriminately on the streets, which, when there is any heavy downpour, chokes gutters and eventually results in flooding. We live in a country where a citizen will finish eating from a plastic bag and dump it on the streets, expecting another citizen to come and pick it up from that place. The disposal of organic and inorganic waste products into water bodies also impairs the quality of water bodies and the lives of species within them are also endangered. These bodies of water are the same source of drinking water in our various homes.

Another cause of poor sanitation is the lack of improved sanitation facilities. Improved proper sanitation facilities such as toilets and latrines promote health because they allow people to dispose of their waste materials appropriately. This is the case because our country does not have enough of these facilities. Hence, individuals dispose of waste inappropriately. There are not enough dustbins on the streets to dump waste into, and not enough toilet facilities to ease oneself when the need arises. This makes people defecate in the open and in water bodies, which pollutes the environment, causes diseases and harms species in water bodies. 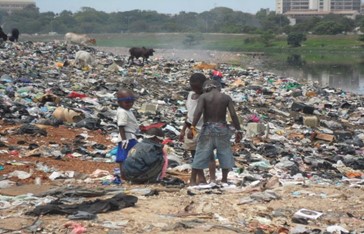 Poor sanitation has negative effects on the individual, the environment, and the nation at large. One major negative effect of poor sanitation is its bad impact on health. Improper disposal of waste can greatly affect the health of the population living near polluted areas or landfills. Waste disposal workers and other employees in these landfill facilities are at a greater risk. Exposure to improperly handled waste can cause skin irritations, blood infections, respiratory problems, growth problems, and even reproductive issues.

Soil contamination is also one of the problems caused by improper waste disposal and removal. Some wastes that end up in landfills excrete hazardous chemicals that leak into the soil. In the case of plastic materials, when they eventually break down, they release DEHA, a carcinogen that affects our reproduction systems and causes liver dysfunction and weight loss. Soil contamination does not only affect plant growth; it is also unhealthy for humans and animals that feed on those plants.

Poor sanitation also has an impact on animals and marine life. Animals likewise suffer the effects of pollution caused by improperly disposed waste and rubbish. Animals that consume grass near contaminated areas of landfills are also at risk of poisoning due to the toxins that seep into the soil.

Poor sanitation also adversely affects the local economy. Individuals want to stay in a healthy, clean, fresh, and sanitary environment. A setting with poor waste management will certainly not attract tourists and investors. This eventually reduces productivity and sinks the local economy.

Furthermore, there should be the provision of improved sanitation facilities to curb the issue of improper waste disposal. Sanitation facilities such as toilets, and latrines, when provided, will drastically reduce the number of individuals defecating in water bodies and in the open. To ensure effective and proper waste disposal at homes and on the streets, dustbins should also be made available. There should also be proper management of landfills in the country since many areas in the country do not have such areas to dispose of waste materials.

Smart enforcement of sanitation by-laws in Ghana is a major factor to consider in improving proper sanitation. The Local Government Act (Act 462) includes by-laws requiring landlords to provide toilets for their tenants, with associated penalties for defaulters. These by-laws are a crucial part of the multi-pronged approach needed to achieve national sanitation targets, but they are rarely enforced. The by-laws give local authorities the power to fine landlords or bring them to court if they default. Defaulters of these laws should be sanctioned in order to deter others from doing the same.