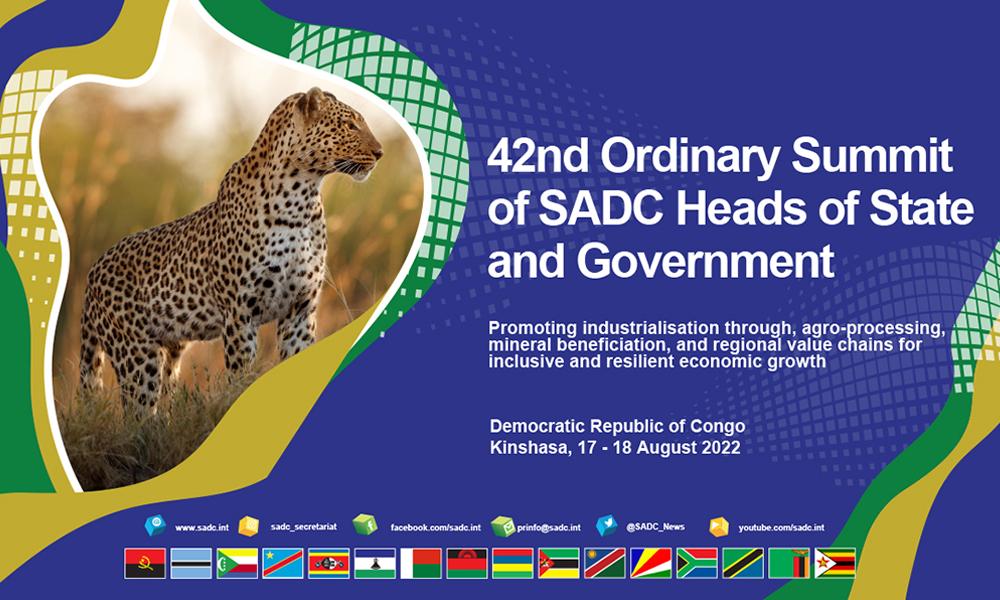 The Southern African Development Community (SADC), at the end of its 42nd ordinary summit of heads of state and government, extended the Standby Force’s mission in the northern Mozambican province of Cabo Delgado. The summit was held on 17 and 18 August at Palais du Peuple (Parliament Building).

Under the theme “Promoting industrialization through, agro-processing, mineral beneficiation, and regional value chains for inclusive and resilient economic growth” the addressed, among other matters, political and peace and security issues, as well as economic and social ones, within the framework of strengthening regional integration.

During the summit, President Félix Tshisekedi Tshilombo of the DRC took over the chairpersonship of SADC from President Lazarus Chakwera of the Republic of Malawi. Regional leaders devoted their deliberations on promoting industrialization through agro-processing, mineral beneficiation and regional value chains for inclusive and resilient economic growth.

The gathering further focused on the proposed amendment to a protocol on the development of tourism in the region and the amendment to the treaty of the SADC that entails recognition of the SADC parliament as a SADC institution. It reviewed the Regional Indicative Strategic Development Plan 2020-2030 as well as Vision 2050.

According to the final communiqué adopted in Kinshasa, the report on the security situation in the province of Cabo Delgado was critically analyzed. “The organization approved the extension of the mandate of the SADC Mission in Mozambique (SAMIM) and the relevant related processes,” the communiqué said. The previous extension ended on 15 July.

The summit commended SAMIM Personnel Contributing Countries (PCCs) for their solidarity and sacrifice in supporting the Mission, and expressed condolences to the governments and families of the nine (9) deceased SAMIM personnel who died in the theatre of operations,” the communiqué added.

For the Mozambican President Filipe Nyusi, the extension of the SAMIM mission demonstrates the spirit of unity and solidarity that the Southern African Development Community members have readily and warmheartedly shown with the people of Mozambique. With an approximate population of 30 million, Mozambique is endowed with rich and extensive natural resources.

Mozambique has grappled with an insurgency in its northernmost province of Cabo Delgado since 2017, but currently fast improving after the deployment of joint military force with the primary responsibility of ensuring peace and stability, and for restoring normalcy in Mozambique. There are about 800,000 internally displaced people due to the conflict, according to the International Organization for Migration (IOM), and about 4,000 deaths, according to the ACLED conflict registration project.

As for other conflicts in the southern African region, the summit expressed concern and solidarity on the latest security developments in the eastern DRC, and instructed the chairperson of the ministerial committee of the SADC Organ on Political, Defence and Security Cooperation to engage with UN Secretary General Antonio Guterres “to explore all avenues to support efforts towards improving the security situation.”

The summit also welcomed a brief report presented by the Government of the Kingdom of Eswatini, regarding the security situation in the country, and while condemning the violence, it mandated the Chairperson of the Organ to convene an Extra-ordinary Summit of the Organ Troika plus Eswatini, at a date to be determined, aimed at finding a peaceful and lasting solution to the security challenges facing the country.

The SADC aims at, among others, promoting sustainable and equitable economic growth and social economic development that will ensure poverty alleviation with the ultimate objective of its eradication, enhance the standard and quality of life of the people of Southern Africa. UNHCR condemns attacks in its compound in Maban, South Sudan