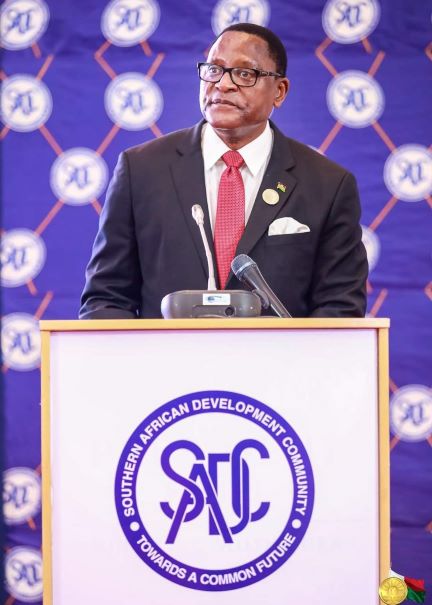 Malawi President, Lazarus Chakwera is describing his one-year Chairmanship for Southern African Development Community (SADC) as a great challenge and a learning period for Malawi as a Nation.

The remarks have been made as his is this week due to handover the SADC mantle to President of DRC, Félix Tshisekedi at this year meeting which is taking place in Kinshasa.

Addressing the press, before travelling to DRC, Chakwera said the one year that Malawi has had the privilege to chair SADC a lot of high-level meetings have been taking place which did not only were benefit SADC but gave Malawi an opportunity to showcase its abilities in various sectors nation since

“Through different meetings on Industrialization, Disaster and Climate Change, Labour and Education, my Ministers were able to share what Malawi is doing but sharing ways on how to advance these issues in the region.

The 42nd Ordinary Summit for Head of State and Government will take place in Kinshasa from Wednesday to Thursday under the theme “Promoting industrialization through, agro-processing, mineral beneficiation, and regional value chains for inclusive and resilient economic growth”.

The Malawian leader took over the SADC Chairmanship from the Mozambican President Filipe Jacinto Nyusi on August 17, 2021 in Lilongwe, Malawi during which Chakwera promised to work towards uniting the region to realize its goals for economic growth.

SADC is an organization of 16-member states established in 1980 to coordinate issues on region integration. The Africa we want: Which Africa do we want?