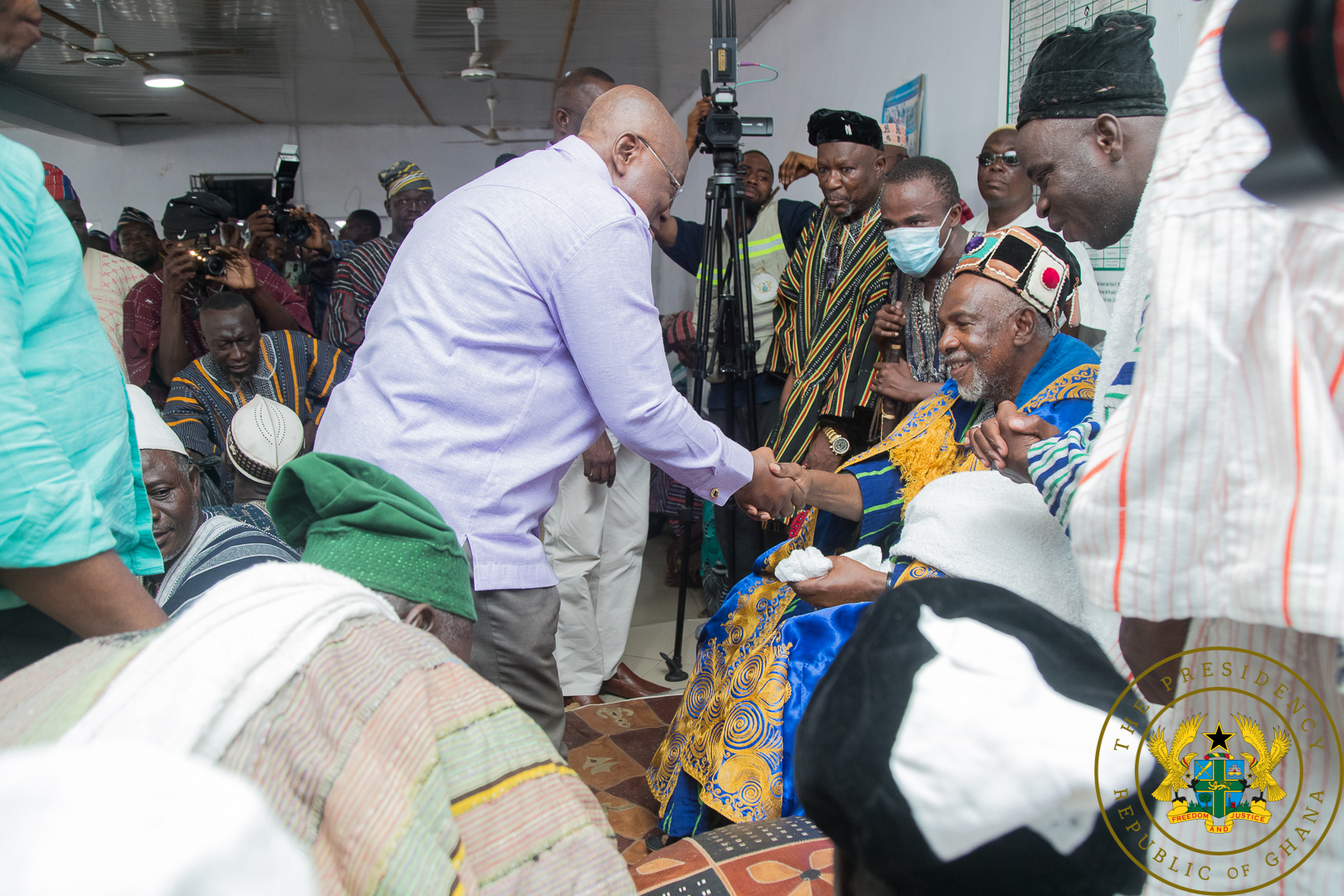 The President of the Republic, Nana Addo Dankwa Akufo-Addo, says no Government in the history of the 4th Republic has constructed roads that his government has in the history of the 4th Republic.Responding to questions in an interview on Radio Upper West, on Monday, 22nd August 2022, at the start of a 2-day working visit to the Upper West Region, President Akufo-Addo disclosed that, the Upper West Region, alone has 18 road projects completed since 2017, 110 more road projects ongoing.Whilst serving notice of the re-packaging and award of the contract for the construction of the Wa-Tumu Road, the President stated the Han-Tumu section of the Road has been re-scoped and awarded to 5 different contractors, namely P W Ghanem Ltd, Maripoma Ltd, Mawums Construction, Ashcal Ltd, and Greenhouse Company Ltd, and will be completed in 24 months.Again, he noted that for the first time in the nation’s history, the Wa-Hamile Road has been tarred.These projects, according to the President, are ample testaments that the Year of Roads mantra “was not just a slogan. It’s been a reality and a very successful programme.”According to President Akufo-Addo, “the road infrastructure that has been established since I became President, let me use this famous word, is unprecedented. We have never seen so much in the roads sector. Let’s put it as far as the 4th Republic is concerned. Roads Minister likes to say, since independence.”He continued, “I just want to be a little more modest and compare apples and apples, and not apples and oranges. And I’m saying that the roads infrastructure that has taken place under Akufo-Addo’s NPP government, is without equal in this 4th Republic.”He indicated that, “government have expanded the road network dramatically. Obviously when you’re starting from zero, when you get to four, it doesn’t look as if you’ve got very far, but from zero to four in itself is a big movement, and when you get to five or six or seven, then you realise that you’re beginning to succeed.In the face of apparent financial difficulties confronting the nation, the President noted that “it’s been a difficult time, but as I said, we are very conscious of the difficulties in the management of the economy, and it affects areas like arrears of payments to contractors, but we are making a big effort to try and resolve these problems.” President Akufo-Addo assured that “contractors are not going to be left high and dry. At the end of the day, if they don’t get paid, the development of our road infrastructure stalls. Things are going to work out, they are definitely going to work out”.Whilst in Wa, President Akufo-Addo paid a courtesy call on the Overlord of the Wa Traditional Area, Naa Fuseini Seidu Pelpuo IV, and also inspected ongoing work on the Youth Resource Centre, which is nearly completed.Brief on Upper West RoadsThe Ministry of Roads and Highways has signed an MOU with M/S Zhougmei Engineering Ltd to undertake the dualization of the Wa Main Road from (S.D. Dombo University of Business and Integrated Development Studies) to the Wa Airport. The MoU also involves the rehabilitation of 130km of Selected roads in the Upper West region.Ghana Highway AuthorityThe Ghana Highway Authority has completed 8 projects totaling 107km in the Upper West Region. Some of the projects are the surfacing of Kaleo-Sankana-Takpo (12.5km); construction of Wa-Han (10km) and the Upgrading of Nadwoli-Lawra-Hamile (42.6km).Under Danida Funding, two (2) major bridges at Kulun (over River Kulpawn) and Amabarala (over River Ambarala) have been completed therefore easing mobility along the Bulenga-Yaala-Kundugu route. These have improved on travel time along the road corridor. Communities that were cut off during the rainy season now have all weather roads.There are currently 22 trunk road projects on-going in the region covering 503km of the network at various stages of completion.Some of these include the 57km Wa-Walewale Road, the 22km Wa -Han Road, and the construction of a steel bridge over River Gongonwu on the Wa-Walewale Road.Approval has been granted to launch a Mabey Bridge at Kamba (Lawra District) on the Lawra – Nandom Road to replace a damaged bridge at the location. Additionally, a new bridge will be constructed at Domwene on the Jirapa -Hamile Road (N12).Department of Feeder RoadsThe Department of Feeder Roads has completed 8 projects totaling 45.7km on the network mainly in the form of rehabilitation and spot improvement. The Department is currently implementing 64 projects covering 1,409km of feeder Roads.The region is also benefiting from the 670km World Bank funded rehabilitation and maintenance of farm roads using Output and Performance Based Contract (OPRC) method. Under this system the Contractor is responsible for the design of the roads, and he also undertakes the construction and maintains the roads beyond two years.*Source The Presidency, Republic of Ghana