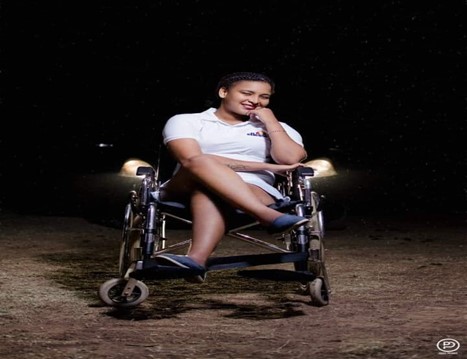 A young ambitious Farida Amiel, a secondary school, student, aiming to get into the university after completing her secondary school. Due to that, she hunts to find a worthy job to enable her to build a dream. Due to that dream of her getting into a university, she found herself working as a secretary at a dentist.

During the day she works as a secretary and at night works at a club. Farida Amiel, in 21,06,2012 met a devastating accident in Maputo, Mozambique, when returning from duty which left her paralyzed on the spot at the age of 21 years.

However, her real concerns with her body manifested gradually. Taking into view her condition, the medical professionals told her that she would remain paralyzed for the rest of her life.

The doctor in charge however told her that she will not be able to move her body again. The information given to her by his doctor that she would remain paralyzed for the rest of her life can leave anyone run through feeling out of sorts.

But little did anyone could predict that this was not the end of Farida’s illness. It was rather the beginning of another chapter in Farida’s life and a more powerful and inspiring one.

Felicia Rosalia Veldt is a friend of Farida who leaves in Denmark. Due to the saddening accident of Farida, she decided to set out a campaign with a fundraising initiative to help Farida get sponsors for her treatment.

She achieved this by setting up the Go Fund page (gofundme.com). With the support of loved ones and other people who were touched by the support of the course.

After wandering to various places, Farida and her family ended up in India; the reason being that the treatment costs are comparatively less. Currently, Farida looks forward to standing on her feet and becoming a legend for others.

Farida did not allow this incident to knock her down. Instead, her splendid personality motivates and cheers others up.

With the efforts of doctors and the blessings of her well-wishers, she is now out of woods and can sit and move her upper extremities. Though the treatments picked up the pace, for the first two years, financial constraints and expensive treatment options took a toll on her improvement.

She has set up a small business which she looks forward to achieving much to be able to enable her to build something unique in her career. In an interview, she lamented that she will be happy to step back into school again. She has led a campaign in Maputo aiming to stop road accidents and safe lives by putting on seatbelts while in a vehicle.

“Life is not a bed of roses” and yet they have lived it beautifully and with utmost grace. These people, unknowingly, become the reason for others to be grateful for what they have.

Opinion: Young people must play a role in political leadership and decision-making