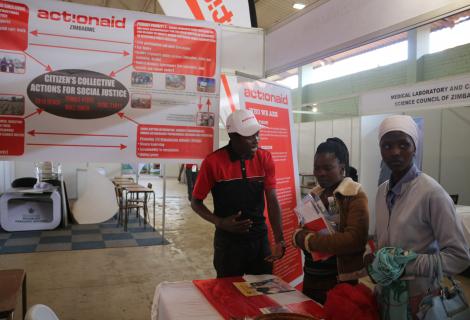 ActionAid Zimbabwe (AAZ) has joined  the rest of the world in commemorating the International Workers’ Day and has called the Zimbabwe government to prioritise smallholder investment and to ensure decent working conditions for agriculture sector workers.

Observed annually on the first of May, the day is a celebration of achievements of the labour movement. This year’s celebrations were  running under the theme, “occupational health and safety is a human right,” and on this day, AAZ called upon the government to prioritise the attainment of decent work in Zimbabwe through upholding of workers’ rights, strengthening of social protection measures and an acceptable living wage.

It is reported that in Zimbabwe, wages, incomes inequalities and workers’ rights violations have grown tremendously over the years especially in the wake of the COVID-19 pandemic.

It is added that the past 5 years have presented smallholder farmers in Zimbabwe majority of whom are women, with multiple shocks and stressors ranging from climatic, economic, biological to health related.

For communities living in marginalized areas who already have their livelihoods compromised, their ability to deal with and recover from such shocks and stressors in a manner that does not disadvantage or have negative consequences on their wellbeing or functioning becomes one of utmost importance to policy makers and duty bearers.

Action Aid says that household and community responses to the different types of shocks and stressors relies heavily on access to relevant and quality information especially with the recent shift from only a drought dominated shock landscape to include excessive rains that destroy property, sweep away livestock and people, erode soils, waterlog fields, and destroy productive assets meant to sustain smallholder’s livelihoods.

‘Resilience, looking at a systems level, focusing on institutions responsible for implementing policies and sustaining systems that support a sector that contributes 17% to the

national Gross Domestic Product (GDP), as we are celebrating Worker’s Day, should be prioritized if serious progressive steps are to be achieved. Agriculture as the main source of livelihood for most of the population requires concerted effort since its performance is a key determinant of rural livelihood resilience and poverty levels,’ Action Aid said.

It is added that currently the agricultural extension system has approximately one extension officer per 800 smallholder farmers thereby making it difficult for them to pay close attention to the needs of the individual farmer.

It is said that in addition, the officers are ill-equipped, and hamstrung by inadequate budget allocations.

It is said that over reliance on development partners to support roll out of information, communication technologies to e-extension affects sustainability of these initiatives  especially for early warning systems.

AAZ says that it  notes that in remote and marginalized areas of the country, limited investment in infrastructure that supports communication at a wider scale and unreliable powering of the same has weakened the initiatives at the expense of smallholder farmers.

It is reported that with the fast-paced nature on how hazards, shocks and stressors are evolving due to climate crises globally, adoption of leaner and effective extension systems cannot be over emphasized.

The organization adds that this should not be limited only to financial related incentives but must be extended to other facets that will provide for decent working conditions for extension officers which is central to gender equality and women smallholder farmers’ empowerment.

AAZ said that while  recent government initiatives targeting the critical service are commendable, it calls upon the Zimbabwean Government to increase budgetary allocation to Ministry of Lands, Agriculture, Fisheries, Water, Climate and Rural Development to fulfill the Malabo declaration with 10% of the budget allocated towards the smallholder sector.

The Malabo declaration is a commitment to the Comprehensive Africa Agriculture Development (CAADP) principles to end hunger and emphasized by the United Nations Sustainable Development Goal 2 of zero hunger by 2030 and the African Union Vision 2030.

Government has been urged to decentralize budgetary utilization to provincial structures for the motorization and equipping of extension officers to adopt e-extension, facilitate investment of communication related infrastructure by private sector players that will have multiple use but contributing effectively to access to early warning information for effective decision making at smallholder level, support in-house training for front line staff on disaster risk management and development of mitigatory measures for the benefit of smallholder farmers, ensure that the Agro-ecology policy is finalised and adequate resources for its roll out have been allocated, extend National Social Security Authority (NSSA) schemes to cover the informal economy workers and domestic workers. Women and mental health in Africa: as part of its signature Heal by Hair program, the Bluemind Foundation unveils a report of cross studies between African women and their hairdressers