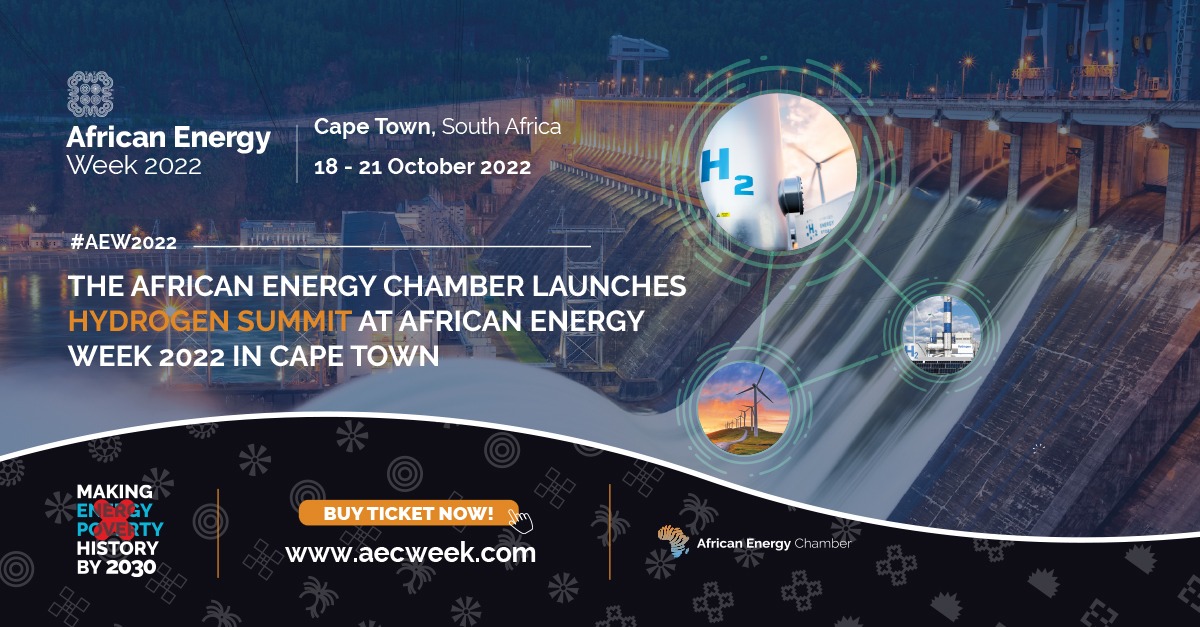 The African Energy Chamber (AEC) is delighted to announce the launch of the Hydrogen Summit which will be debuted at the AEC’s annual conference, African Energy Week (AEW)  2022, taking place from October 18 – 21, 2022, in Cape Town, South Africa.AEW 2022’s Hydrogen Summit will be headlined by industry leaders and executives from both the public and private sectors in Africa’s top, and prospective, hydrogen markets. The Hydrogen Summit will be beneficial to the African continent as it seeks to improve and expand its hydrogen production, use, and exports to meet growing energy demand.By leveraging their vast wind and solar energy potential, African countries, including South Africa and Egypt, have the ability to play a leading role in green hydrogen production. Their hydrogen outputs can be used to diversify the energy mix, address renewable energy fluctuations to provide baseload power using clean capacity, decarbonize transportation and the heating and cooling of buildings while achieving 2050’s zero-emission economies goal.The launch of the Hydrogen Summit at AEW 2022 comes at a time African countries are starting to embark on production and infrastructure development initiatives. For instance, the South African government has, through the Ministry of Higher Education, Science and Innovation, launched the country’s Hydrogen Society Roadmap to ensure skills development, job creation and the development of infrastructure to prepare the South African economy for an influx in hydrogen use, a move that would help decarbonise energy-intensive industries such as steel production. The Roadmap is expected to create 20,000 new jobs during the first years of its implementation, helping the South African economy recover from the impact of the pandemic.Similarly, the Ugandan Government, through its Rural Electrification Agency, has kickstarted a joint initiative with Belgian firm, Tiger Power, to construct hydrogen-battery systems for storing renewable energy which is used to power rural consumers when most needed.“The Hydrogen Summit at AEW 2022 will present an opportunity for African leaders to translate policy into reality, and for those that have not yet developed hydrogen gas roadmaps and policies to learn from their African counterparts,” stated NJ Ayuk, Executive Chairman of the AEC.Meanwhile, in Egypt, Welsh-based energy firm H-2 Industries has partnered with the General Authority for Suez Canal Economic Zone to develop a 1GW waste-to-hydrogen facility. This facility has the capacity to convert 4 million tons of organic waste per year into green hydrogen, promoting the circular economy model and diversifying the North African state’s energy portfolio. The hydrogen produced will be used to meet local demand and exported to international markets including Europe, further boosting the country’s export economy.Recently, Namibia has also made significant progress towards green hydrogen expansion. In November 2021, the Namibian government selected HYPHEN Hydrogen Energy as its preferred bidder for a $9.4 billion green hydrogen project in the Tsau//Khaeb National Park. The project is set to produce approximately 300,000 tons of green hydrogen annually and it will position Namibia as a globally competitive green hydrogen economy.“All forms of hydrogen will help Africa achieve energy resilience and even help other regions such as Europe – currently facing soaring energy prices due to inadequate gas reserves – meet reliability goals. But what Africa needs is adequate funding and the right policy frameworks in place. This is what the Hydrogen Summit at AEW 2022 will be about,” added NJ Ayuk.Despite the push to transition to green hydrogen, blue and grey hydrogen markets are expected to remain competitive as gas will continue to provide a much-needed energy source to meet energy demand as the transition to renewables intensifies. South Africa’s SASOL is one of the leaders within the blue and grey hydrogen sectors in Africa, with the state-owned firm exporting hydrogen to meet demand in the EU, South Korea and Japan.With Africa seeking to maximize the potential of hydrogen to address energy poverty, energy affordability and access, and decarbonization and reliability, a number of challenges such as the lack of hydrogen infrastructure and capital are hindering market expansion.AEW 2022 aims to address these challenges, featuring high-level discussions around policy development and enactment; challenges hindering hydrogen take-off; and capital attraction and its allocation towards the hydrogen sector of energy markets. These discussions will pave the way for the installation of hydrogen production, storage and transportation infrastructure as well as increase the demand for hydrogen. Through securing the right investments, Africa will expand its hydrogen market and has the ability to help other regions meet demand of the resource.About AEW 2022: