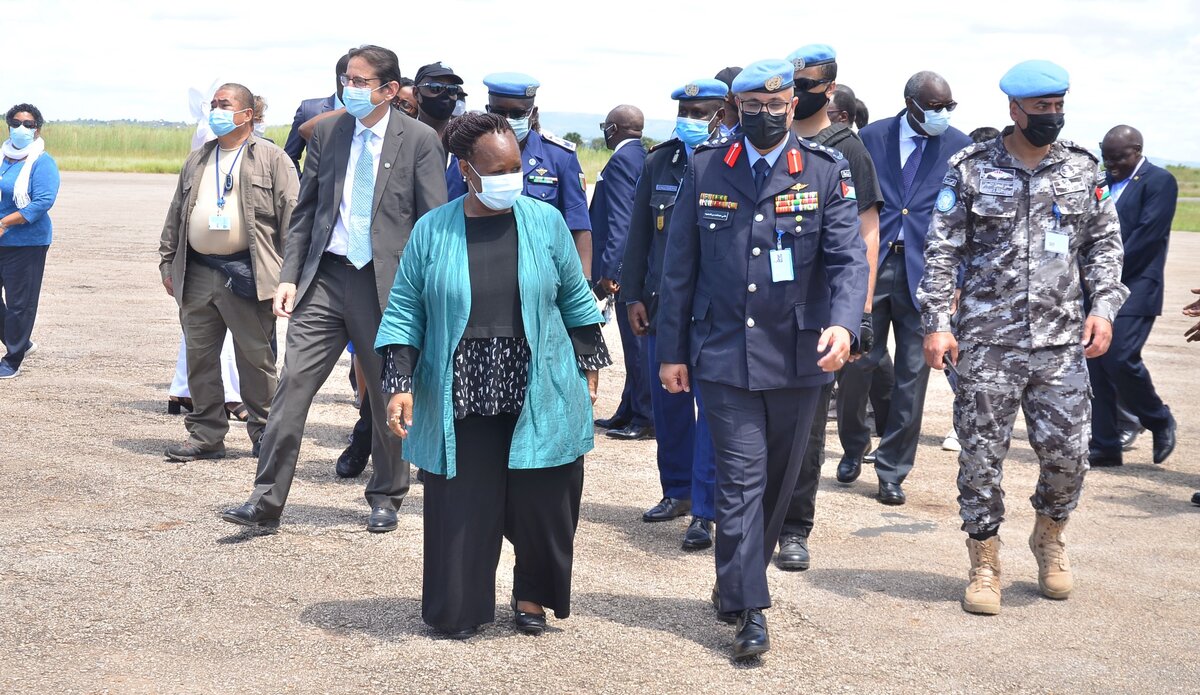 KINSHASA, Democratic Republic of Congo, April 13, 2022/ — The Special Representative of the Secretary General of the United Nations in the Democratic Republic of Congo (DRC) and Head of MONUSCO, Bintou Keita visited Tanganyika province from April 5 to 8, 2022 accompanied by a high-profile delegation comprising Mr. Khassim Diagne, Deputy Special Representative for Protection and Operations; Mr. Bruno Lemarquis, Deputy Special Representative, Resident Coordinator, Humanitarian Coordinator, as well as senior officials from various MONUSCO structures and United Nations Agencies.This working mission to Tanganyika fits into the assessment of the transition process with the provincial authorities and partners in the context of MONUSCO’s withdrawal from this DRC’s province in June 2022.Many people establish a link between the transition plan and MONUSCO’s definitive departure from the province, which is not the case. The head of MONUSCO, Bintou Keita clarified that MONUSCO is engaged in a process for a responsible withdrawal in June 2022, to dispel the confusion. “United Nations Agencies, Funds and Programs will continue to enhance their interventions in Tanganyika. Potentials in this province are so great that definitively establishing peace and security there is essential,” she said.Meetings with the stakeholders in the transition process, in particular the provincial government of Tanganyika, the provincial Assembly, the civil society, the women’s networks, and youth groups enabled the delegation to assess the state of progress of the transition process in line with the exit strategy developed for Tanganyika in June 2020.The Head of MONUSCO specified that it was important to ensure the implementation of the transition mechanism. According to her, there is still work to be done on the appropriation of the plan at the local and provincial levels. “We will have to disseminate, popularize the transition plan for a better understanding of the process”.Bintou Keita underscored that in accordance with the principles of a responsible exit, advocacy work remains to be done to contribute to the stabilization of the northern parts of the territories of Kalemie and Nyunzu still plagued by insecurity caused by armed groups.The field visit to Bendera, a locality located 120 km from Kalemie, enabled the delegation to see for themselves the security challenges in this area. In light of the discussions, MONUSCO will continue to support the provincial authorities with actions for the stabilization and restoration of the State authority in this territory.For their part, the provincial authorities pleaded, more particularly, for an intensification of collaboration and pooling of efforts between the provincial government and MONUSCO to achieve lasting peace throughout Tanganyika, which is still plagued by the activism of the few groups armed, especially in Bendera and Nyunzu.The Speaker of the provincial Assembly, Virginie Nkulu Nemba insisted on the need to adopt a more inclusive approach that will make it possible to respond effectively to the humanitarian needs of the internally displaced persons. He reiterated the need for organizing training and capacity-building for provincial parliamentarians around MONUSCO’s missions and mandates.MONUSCO delegation also had a one-on-one meeting with provincial officials from the Congolese National Police (PNC). The provincial Police Commissioner, General Yav Mukaya Jean, took this opportunity to thank MONUSCO for all the training and capacity-building sessions held for the PNC since the Mission arrived in Tanganyika.“All these trainings have not been in vain, there is now a change in the approach and working methodology used by our personnel on the ground”, he argued. “Today, we are seeing a real change in the mindset and positive progress made by our troops who are making efforts to respect human rights in the protection of civilians,” he added.In a meeting with women’s associations in Tanganyika, the coordinator of the Tanganyika Women’s Network (REFETANG), Albertine Kungwa thanked MONUSCO for its role in stabilizing Tanganyika. “But we are worried at its departure,” she said.However, she acknowledged, “the establishment of a lasting peace is not only the role of MONUSCO; but a duty for each and every one of us”, encouraging the population in Tanganyika to sow the seeds of peace.Source Mission de l’Organisation des Nations unies en République démocratique du Congo (MONUSCO) Nigeria 2023: It is our turn to produce next President -Southern Governors Insist