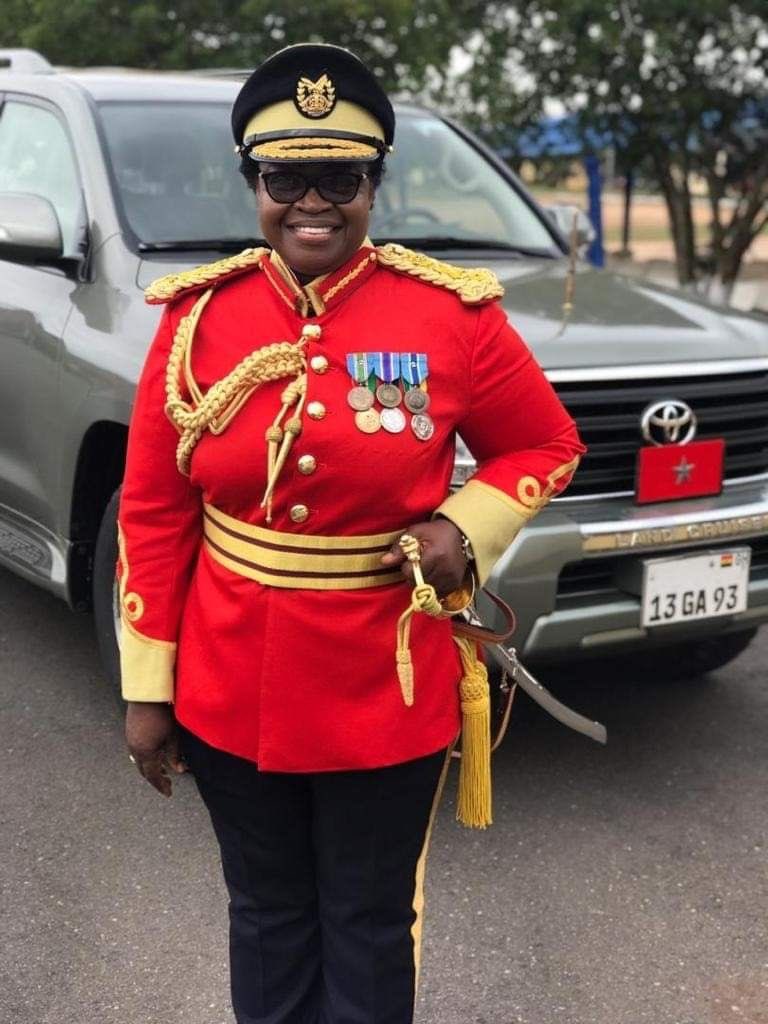 Constance Ama Emefa Edjeani-Afenu was the first female brigadier general of the Ghana Armed Forces. She was deployed to several United Nations peacekeeping missions and served as the Deputy Military Adviser to Ghana’s Permanent Mission in New York City.

Edjeani-Afenu’s father was in the army, as were her two siblings who predeceased her. She grew up in Tamale and attended Kamina Barracks Primary and Armed Forces Experimental in Kumasi before studying for O- and A-levels at Wesley Girls’ Senior High School in Cape Coast Edjeani-Afenu entered the Ghanaian Armed Forces in 1978, at age 18.

She was one of only two female students in her intake, and the other woman left the course after a few weeks. Edjeani-Afenu was commissioned on 25 April 1980 as a Second Lieutenant after 18 months of training at Ghana Military Academy In the early 1990s, she was at the Junior Division of the Armed Forces Command and Staff College, and she later joined the Forces Pay Regiment as a commanding officer in 1999.

She was appointed to serve as the Deputy Military Adviser of the Permanent Mission in New York from 2013 to 2016. It was also the first time a woman had occupied that position. As part of the Ghana Battalion, she was deployed to UNIFIL in 1994 and 1998, MONUSCO in 2007, and UNMIL in 2009.

On 7 March 2016, Edjeani-Afenu was promoted to the rank of Brigadier General, the highest position ever occupied by a female in the Armed Forces. The UN appointed her as the Deputy Force Commander in MINURSO in 2019.

Edjeani-Afenu was awarded the “most resilient officer” award in her graduating class after a very tough training session in the Ghana Armed Forces. She was the first female to get top rank in GAF. She was named the African Union (A.U.) Gender champion for 2017 by the president of Ghana, Nana Akufo-Addo.

She received the “First Lady’s Award” on International Women’s Day in 2019 from Rebecca Akufo-Addo.

Edjeani-Afenu was married to Fred Afenu, an army officer; they had three children.

Brigadier-General Edjeani-Afenu died on Monday, 24 January 2022 at the 37 Military Hospitals following a short illness. She was promoted to the highest position occupied by a female in the Ghana Armed Forces (GAF) in March 2016.

Brigadier-General, Constance Ama Emefa Edjeani-Afenu, has been laid to rest. She was buried at the Military Cemetary in Accra on Friday, 25 March 2022. Before her burial, she was promoted to the rank of Major-General posthumously.

In attendance at the funeral were President Nana Addo Dankwa Akufo-Addo and other dignitaries. Ghanaians were happy for her leadership role in the service,  as many Ghanaians mourn with the family.