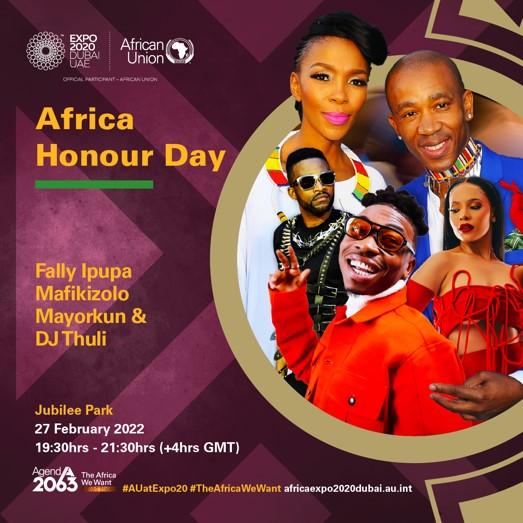 One of the African continent’s biggest export, music, will add flavor and colour to the African Honour Day at Expo 2020 Dubai. An epic celebration of African music and talent as the African Union (AU) continues to commemorate its 20th anniversary.

African Union (AU) and Dubai Expo partner  and Africa’s premium entertainment youth and culture brand, MTV Base, with the sponsored by the Arab Bank for Economic Development in Africa (BADEA) to commemorate the continent’s first-ever participation at the world expo event on Sunday, 27 February 2022.

Tagged ‘Colours of Africa’, this exceptional global event will aid in positioning Africa to the world. “It is with this in mind that MTV Base continuously aims to collaborate/partner with organisations to spotlight the positive narratives around the African continent by leveraging the power of music, culture and storytelling,” said Monde Twala, Senior Vice President and General Manager at Paramount Africa & Peer Lead BET International.

As a media partner for the global showcase, MTV Base has committed to be a voice through its platforms for the ‘Colours of Africa’ Honour Day campaign, which aims to bring together Africa’s Heads of States and government, high-level private sector decision makers and key development partners alongside the Gulf Cooperation Council (GCC) leadership to jointly reimagine a sustainable future for the continent through the promotion of local talent.

The African Union’s Director of Information and Communication, Ms.  Leslie Richer remarked, “Africa continues to reposition herself as a global business partner for the present, the future and beyond as underpinned in Agenda 2063. Music and the entirety of the Creative and Cultural Industries offer vast business opportunities; a fact recognised in continental instruments like the Charter for African Cultural Renaissance and The African Union Plan of Action on Cultural and Creative Industries.”

She added that partnerships with key players in the CCIs such as Paramount are some of the ways the AU is creating the necessary linkages to showcase African talent as well as provide the platforms to take control of the narratives about Africa. She said that “the partnership with Paramount at Expo 2020 Dubai is one of the efforts we are making as the African Union to showcase some of Africa’s talent on a global stage and the Africa Honour Day concert is an opportunity to showcase and display the influential authority that African artistes have on the global scene.”

The ‘Colours of Africa’ Honour Day showcase, hosted by the dynamic duo of Nassima Dzair from Algeria and Lunga Kupiso from South Africa, promises to feature a fusion of incredible talents from across the continent, delivering an unforgettable night of African flavour. Our delectable culture squad member, Folu Storms, would be on ground to take us through the behind the scenes and exciting moments through the event. Some of the confirmed acts include Morocco’s legendary performer, Cheikh Oueld Labied; South African-born afrobeats DJ, Spokenpriestess who will be joined by Versatile during her set; Nigerian singer and songwriter, Mayorkun, South Africa’s celebrated Afro Pop duo, Mafikizolo; Congolese sensation, Fally Ipupa, and the proclaimed queen of South African and African street culture, DJ Thuli P.

“As a brand, we are inspired to continuously promote initiatives through powerful partnerships that are committed to realise a reimagined Africa built on narratives of innovation, creativity, resilience and cultural renaissance. Over the last few years, Africa’s entertainment industry has blossomed, and we are proud to be part of this unforgettable showcase of some of Africa’s best talent,” Twala concluded.

The African Union’s ‘Colours of Africa’ Concert” will be on the Jubilee Stage at the Dubai Expo 2020 and will be broadcast on MTV Base & Paramount Africa channels across Africa for the whole continent to experience.

Join the conversation using the hashtag #AUatExpo2020 #Agenda2063 across all social platforms for more details. https://www.youtube.com/watch?v=n6GlDpeZbHQ